The Chiefs ended a two-match winless run when they claimed a deserved 46-31 victory over the Waratahs in Hamilton.

The two-time champions were full value for their win and outscored their opponents by six tries to four with James Lowe leading the way with a hat-trick.The home side held the upperhand throughout and led 18-3 at half-time thanks to tries from Mitchell Brown and James Lowe while the Waratahs' points came courtesy of a Bernard Foley penalty.

The result ends the Waratahs' play-off hopes as they can no longer finish above the Brumbies at the top of the Australian Conference.

Meanwhile, the Chiefs provisionally move into second place on the New Zealand Conference table although that situation can change if the Hurricanes beat the Western Force in Perth later on Saturday.

The Chiefs dominated from the outset and Damian McKenzie opened their account with a penalty in the eighth minute.

The home side ran the ball from all areas of the field and were soon rewarded when  Mitchell Brown crossed for their opening try after Aaron Cruden and Anton Lienert-Brown combined brilliantly in the build-up.

Five minutes later, McKenzie added a penalty and a mazy run from the diminutive full-back in the 31st minute was rounded off by Lowe.

Things went from bad to worse for the Waratahs in the 35th minute when Tolu Latu was yellow carded for tripping McKenzie before Foley landed a penalty on the stroke of half-time to add some respectablity to the score.

The Chiefs continued to dominate after the restart, and two superbly worked tries from Lowe and Tawera Kerr-Barlow within the space of two minutes meant they held a comfortable 32-3 lead by the 45th minute.

Lowe's five-pointer was particularly impressive as he dotted down after gathering a brilliant offload from Kerr-Barlow deep inside the Waratahs' 22.

The visitors struck back when Rob Horne scored their opening try after intercepting a McKemzie long pass just inside the Chiefs' half and when Will Skelton barged over for their second try, from a rolling maul, the momentum had swung in their favour.

That did not last long though as Kerr-Barlow soon crossed for his second try after outpacing the cover defence. Both sides then received yellow cards in thec64th minute when Brown and Paddy Ryan were identified as the culprits in an off-the-ball scuffle but there was still plenty of drama to follow in the game's closing moments.

First, Cameron Clarke crossed for his side's third try in the 72nd minute before Sekope Kepu scored the best try of the match after a barnstorming 50 metre run in which he beat several defenders. 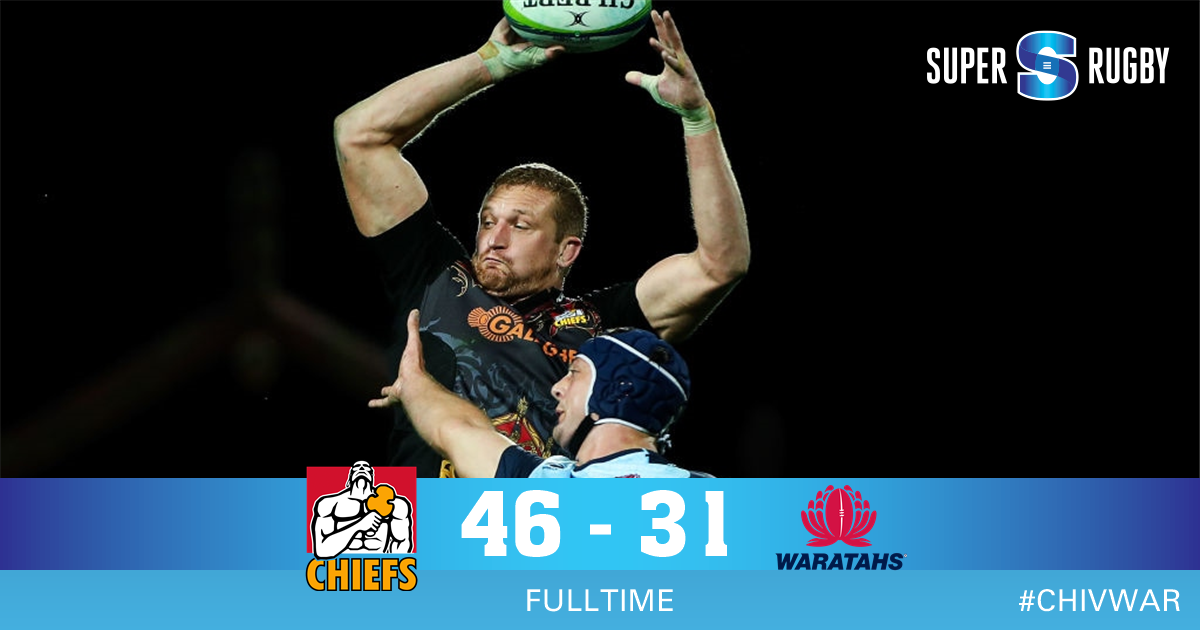 The Chiefs would have the last laugh thugh and secured the result when Lowe got over for his third try after Cruden did well in the build-up.