The Brumbies secured first place in the Australian Conference with a 32-3 bonus-point victory over the Rebels in Canberra on Saturday.

It was a game in which the wet conditions made handling of the ball difficult and resulted in a number of unforced errors.

Tries from Jordan Smiler, Tevita Kuridrani, Wharenui Hawera and Nigel Ah Wong proved too much for the Rebels who have now gone tryless in four of their last six games.

The result means the Brumbies have an unassailable lead at the top of the Australian Conference with 33 points while the Rebels remain rooted to the bottom of the table on eight points.

The home side showed good ball retention and enjoyed the majority of the possession in the game and are guaranteed a place in the Super Rugby play-offs.

Wharenui Hawera gave the Brumbies a 3-0 lead, just reward for the pressure they put on the Rebels in the opening quarter. Reece Hodge responded with a penalty for the Rebels in the 25th minute to level matters at 3-3 in a low-scoring opening to the game.

After the Rebels were penalised for offside, Hawera added another three from the tee on the half-hour mark to put the home side 6-3 up.

Soon after, the first try of the game went to the Brumbies. After Marika Koroibete was dispossessed near his goal line, the Brumbies launched a counter-attack and won a penalty for offside. Speight took it quickly, pushing the ball wide and Smiler went over unopposed in the corner five minutes before half-time.

After the break, the Brumbies continued to apply pressure and build on their momentum. After good work from Joe Powell to force a knock-on off Amanaki Mafi at the back of a Rebels defensive scrum, the Brumbies had the put in at a five-metre attacking scrum.

Kuridrani crashed over from first phase ball after a good flat pass from Powell. No one was going to stop the Kuridrani train from that distance.

The Brumbies' third try came from their own attacking lineout and Powell was quick to go wide. Hawera scythed through a gap and showed good reach to dot down in the 57th minute. He converted his own try to put the score at 25-3 to the Brumbies.

The bonus-point try for the Brumbies came just before the hooter. Hodge and Koroibete took the ball deep inside Brumbies territory and again they conceded a penalty to turn it over. The Brumbies then lost the lineout, but got the ball back after a knock on. A grubber kick bounced nicely for the Brumbies and Ah Wong went over to score. 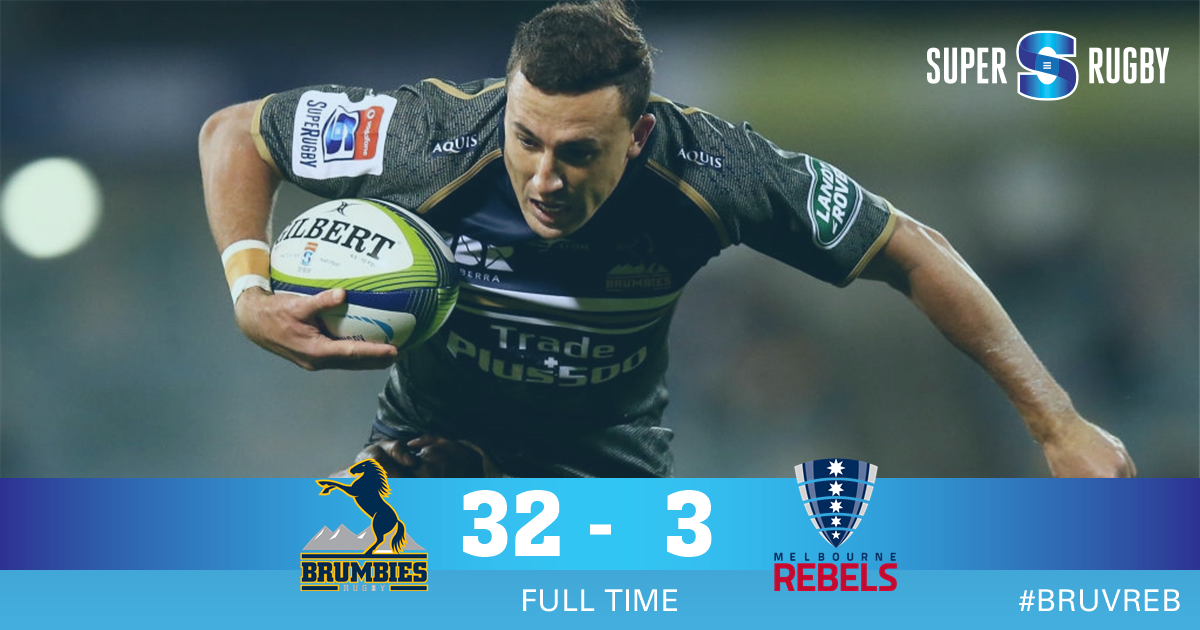