The Kings claimed their fifth victory of the Super Rugby campaign after edging the Jaguares 31-30 at Vélez Sarsfield in Buenos Aires.

What will make this defeat hurt more for the Jaguares is that they scored five tries - through Juan Manuel Leguizamón, Emiliano Boffelli, Nicolás Sánchez and Joaquín Tuculet (2) - but their goal-kicking percentage finished at 25.

There was only six points separating the sides at the break after a fast-paced first 40 minutes which saw the Jaguares cross three times. In reply the Kings went over twice as they once again proved they are a team on an upward curve this season under head coach Deon Davids.

The visitors came out in determined mood but their early pressure didn't result in points, in fact they were lucky not to concede from a counter attack that was sparked by Jaguares centre Bautista Ezcurra. In the end scrum-half Martín Landajo lost the ball on the try-line.

That breakout seemed to lift the Jaguares though and after a spell of pressure they went wide right to where the busy Tuculet found flank Leguizamón, who barged over. Sánchez missed with his difficult conversion attempt so it was a 0-5 advantage for the hosts on 17 minutes.

It did not last long as after Tuculet strayed offside, a kick to the corner led to centre Vulindlu crashing over off a short ball for 7-5.

Sánchez did restore his side's lead on 26 minutes, but again the Kings responded, with Mapimpi racing over following quick hands for 14-8.

At this point it was end-to-end rugby so it was no surprise when Tuculet's smart grubber found Boffelli on the left wing to make it 14-13.

The Jaguares weren't done and when Sánchez cut back against the traffic towards a ruck, he slipped through weak tackling for a 14-20 lead.

Just two minutes after the break the Jaguares moved further ahead when Sánchez's grubber saw Tuculet gather before going over for the try. However, four minutes later the Kings added a penalty via Cronje's boot, which cut that buffer down to eight points at 17-25 to the hosts.

Sánchez was struggling off the tee in the game and was at a worrying success rate off 33 percent on 57 minutes after another penalty miss.

The Kings made the fly-half pay two minutes later as Vulindlu combined with Mapimpi to send the wing over on the left. With Cronje cooly slotting the conversion, suddenly the South African franchise were just one point behind at 24-25 and had their tails up in Buenos Aires.

Joaquín Díaz Bonilla replaced Sánchez soon after but even he couldn't add points to their tally, missing his first attempt on 63 minutes.

The match was seemingly there for the taking for the Kings and when Mjekevu raced over thanks to a lovely pull-back pass from scrum-half Stefan Ungerer they had a six-point cushion with just eight minutes to play. The Jaguares needed to find something special at this point.

And they came agonisingly close to rescuing the four points on 75 minutes as a lovely Bonilla cross-kick found Tuculet wide out for the try. But it was perhaps fitting that a missed conversion cost the Jaguares the lead and victory on a dismal night for their goal-kickers. 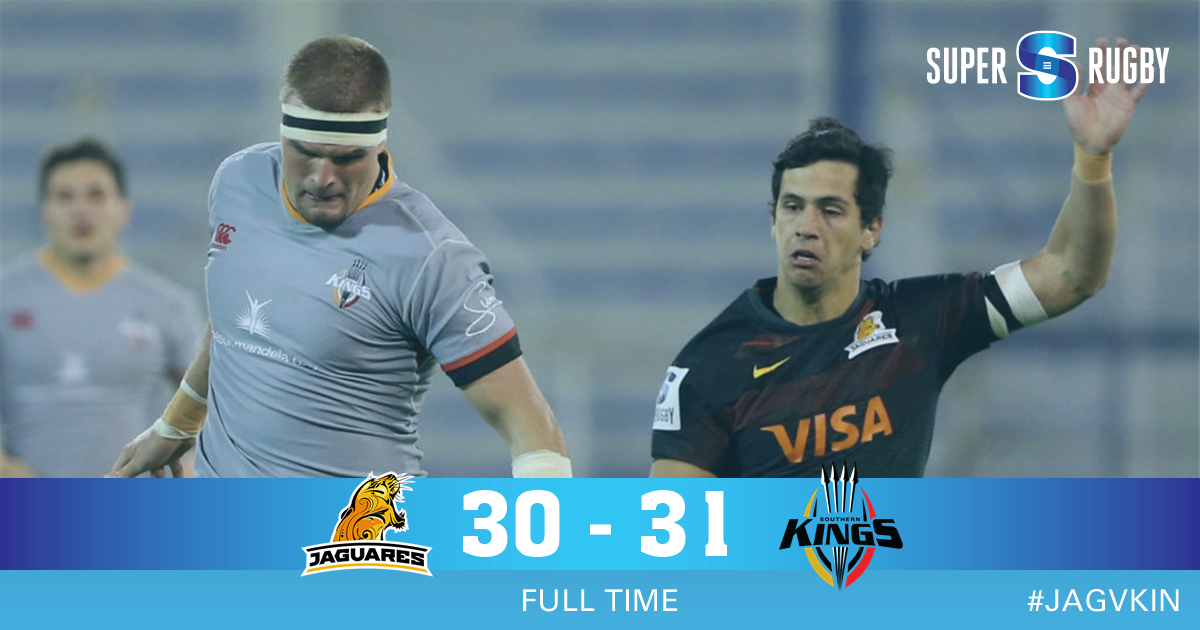