Chiefs edge out Hurricanes in Wellington

The Chiefs put up a spirited performance to beat the Hurricanes 17-14 in a thrilling New Zealand derby in Wellington on Saturday.

It was scintillating game, played at a frenetic pace, both sides scored two converted tries apiece with a Damian McKenxie penalty proving to be the difference between the sides in the end.

As the scoreline suggest, this was a tough and uncompromising affair and the sides were deadlocked at 7-7 at half-time after Vaea Fifita and Aaron Cruden scored tries for their respective sides.

The result means the Crusaders have sewn up the New Zealand Conference although the Chiefs are now just a point adrift of the secons-placed Hurricanes in the standings with one round of regular season matches to be played.

The Hurricanes made a terrific start and seven minutes into the game Fifita powered his way over the try-line after the ball went through six phases in the build-up.

The Chiefs did not take that lying down though and three minutes later, James Lowe put Anton Lienert-Brown in the clear down the left-hand touchline. The All Black set off on a 40 metre run before TJ Perenara and Jordie Barrett combined to halt his progress as he crossed the whitewash.

After checking with his TMO, referee Nick Briant ruled that Lienert-Brown had knocked on and the Hurricanes breathed a huge sigh of relief.

The visitors continued to attack and midway through the half they were rewarded when Cruden rounded off a superb move after Solomon Alaimalo and Charlie Ngatai combined brilliantly in the build-up.

The rest of the half was an attritional affair but although both sides created plenty of opportunities, they also impressed with solid defensive efforts which cancelled each other out.

Like the opening period, the second half was also tightly contested and although both sides stayed true to their attacking roots, superb defence meant neither side could take the lead during the opening quarter of the half.

In the 60th minute, the Chiefs were reduced to 14 men when Michael Allardice was yellow carded for a shoulder charge on Perenara at a ruck but despite their numerical disadvantage, the visitors did not panic and continued to attack.

They were rewarded shortly after Allardice's exit when James Lowe crossed the whitewash after gathering a pass from Shaun Stevenson, who tore the Hurricanes defence to shreds with a superb line break in the build-up.

The Hurricanes were now chasing the game and upped the ante on attack but four minutes before full-time McKenzie slotted his crucial penalty after Jordie Barrett held onto the ball on the ground.

Despite that setback, the home side did not surrender and two minutes before the end, Beauden and Jordie Barrett combined brilliantly before Jordie offloaded to Wes Goosen, who dived over in the corner.

The younger Barrett landed the conversion from close to the touchline and although the Hurricanes gave their haul to overtake their visitors in the dying moments, the Chiefs held on for a memorable win. 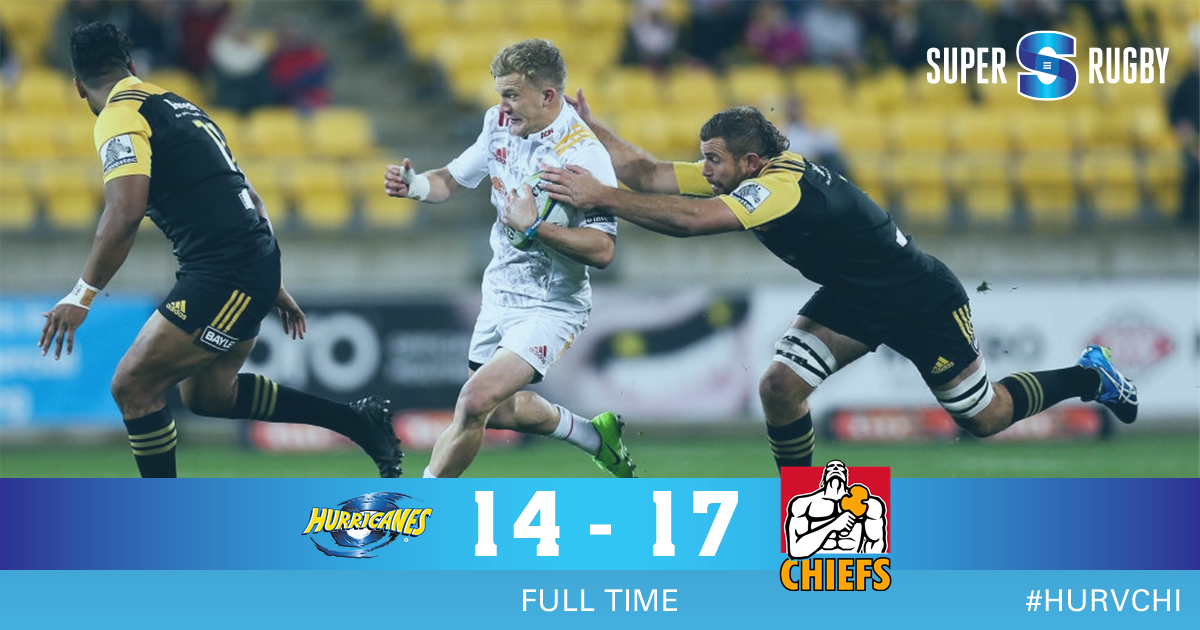