Cooper's penalty was the final act of the match after Brumbies replacement Andrew Smith was penalised for playing the ball from an offside position at a ruck in front of his posts.

The result is a momentous one for the Reds as it ends a five-match losing streak against the Brumbies.

The match was played in foggy and rainy conditions which resulted in a plethora of handling errors from both sides, especially in the first half, although the Brumbies got the rub of the green in the end and eventually outscored their hosts two tries to one.

There has been plenty of criticism aimed at tne standard of play delivered by Australian teams during this year's tournament and judging from this encouter that criticism is justified.

The opening half was a dour affair and finished tryless with two Quade Cooper penalties giving the Reds a slender 6-3 lead with a Wharenui Hawera three-pointer off the kicking tee being the Brumbies' only points during this period.

The opening quarter remained scoreless although Aiden Toua wasted a golden opportunity to give the Brumbies the lead i the 20th minute. This, when he chased a kick deep inside the Reds' 22 and tried to gather it, before diving over the tryline, but knocked on instead.

The visitors put that setback behind them and took the lead courtesy of a Wharenui Hawera penalty in the 27th minute but Cooper's two penalties late in the half gave the hosts the lead, albeit a narrow one.

The Brumbies upped the ante after the break and 10 minutes after the restart they launched a drive from a lineout maul but their momentum was halted illegally by George Smith, just short of the Reds' try-line, and referee Brendon Pickerill awarded a penalty try to the visitors while Smith was also sent to the sin bin for his indiscretion.

Smith's spell on the sidelines proved costly as shortly afterwards, things worsened for the Reds when Quade Cooper fielded a ball behind his try-line. The Wallaby pivot lost possession after a thumping tackle from Tom Banks and Kyle Godwin dived onto the loose ball to claim his side's second try.

With the score 15-6 to the visitors, this clash was following the same script as the teams' previous fixture in Csnberra earlier this year – which the Brumbies won 43-10 after the sides were level at the interval – but unlike the previous encounter, the Reds did not capitulate in the second half. 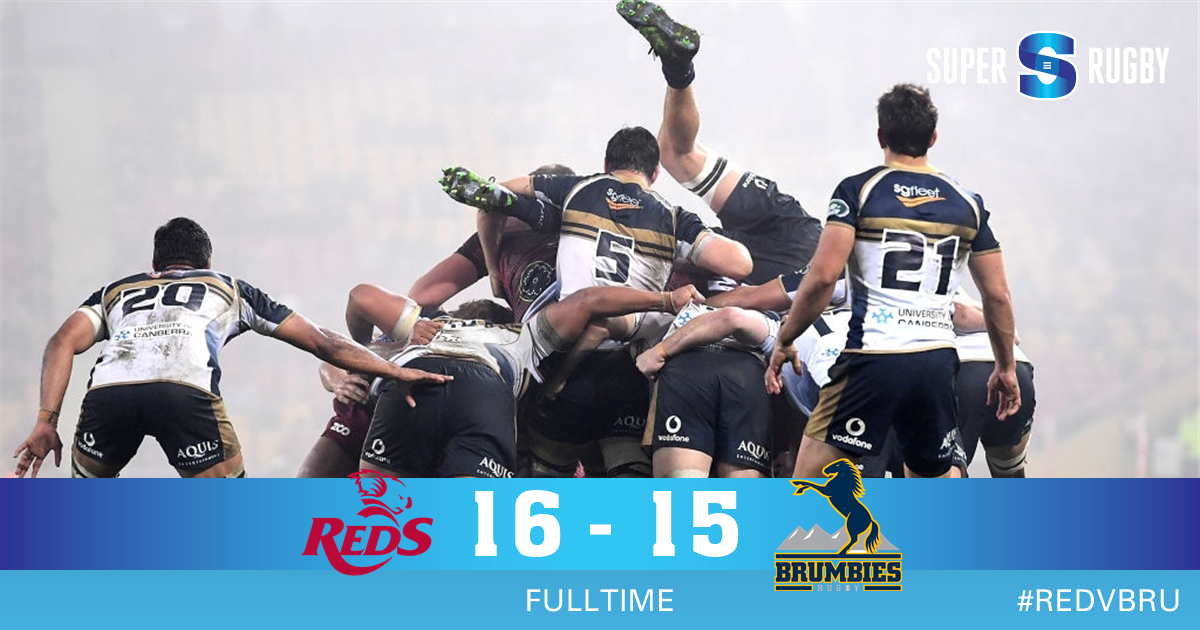 They showed plenty of grit and were rewarded in the 72nd minute when Hamish Stewart got over for his first Super Rugby try after running onto a pass from Smith close to the Brumbies' try-line and Cooper added the extras to narrow the gap to two points.

And after an extended period camped inside the Brumbies' half, the home side were rewarded when Cooper held his nerve to slot the matchwinning kick at the end.