The Highlanders made a statement of intent ahead of the quarter-finals when they claimed a convincing 40-17 win over the Reds in Dunedin on Friday.

In a fast-paced and entertaining encounter, the 2015 champions delivered a masterclass of attacking rugby and eventually outscored the Reds by six tries to three.

The Highlanders dominated from the outset and led 21-5 at half-time thanks to tries from Waisake Naholo, James Lentjes and Kayne Hammington with Izack Rodda crossing the whitewash for the Reds.

The home side made a terrific start and opened the scoring as early as the third minute when Naholo showed why he is such a highly rated finisher by rounding off in the right-hand corner after Liam Squire laid the groundwork with a barnstorming run in the build-up.

Lima Sopoaga did well to add the extras from close to the touchline and in the 10th minute he was lining up another shot at goal after a superb piece of individualism from Lentjes.

This, after the flanker gathered the ball on the Reds' 22-metre line and got past Karmichael Hunt with a powerful fend before racing away to score his side's second try.

The Reds were slowly gaining momentum and came close to opening their account in the 29th minute when James Tuttle made a superb break.

That missed opportunity proved costly for the visitors as five minutes later, Hammington went over for their third try after sprinting through a gap off the back of a scrum on the Reds' five-metre line.

Three minutes before half-time, the Reds were eventually rewarded when Rodda scored their opening try from close quarters deep inside the Highlanders' 22.

Unfortunately for the Reds, the second half started in a similar fashion to the first when Rob Thompson charged down an attempted clearance kick from Hamish Stewart inside the Reds' 22.

The hosts pounced on the loose ball and shifted it wide to Tevita Li, who dived over in the left-hand corner despite a desperate tackle from Caleb Timu.

Things went from bad to worse for the Reds in the 48th minute when referee Mike Fraser awarded a penalty try to the hosts after George Smith was penalised for playing the ball illegally in a bid to halt the Highlanders' momentum at a scrum on the Reds' five-metre line.

The visitors struck back five minutes later when Alex Mafi barged over for their second try from the back of a driving maul close to the Highlanders' try-line.

That did not deter the hosts from playing their attacking game and after an extended period camped inside the Reds' 22, Li gathered a crossfield kick from Sopoaga and dotted down but his effort was ruled out after television replays showed that the wing did not have downward pressure on the ball when crossing the whitewash.

The Highlanders put that setback behind them and five minutes later, Ash Dixon broke the line before diving over for his side's sixth try.

To their credit, the Reds did not surrender and they were rewarded with their third try in the 69th minute - Timu rounding off after gathering a superb offload from Izaia Perese close to the Highlanders' try-line. 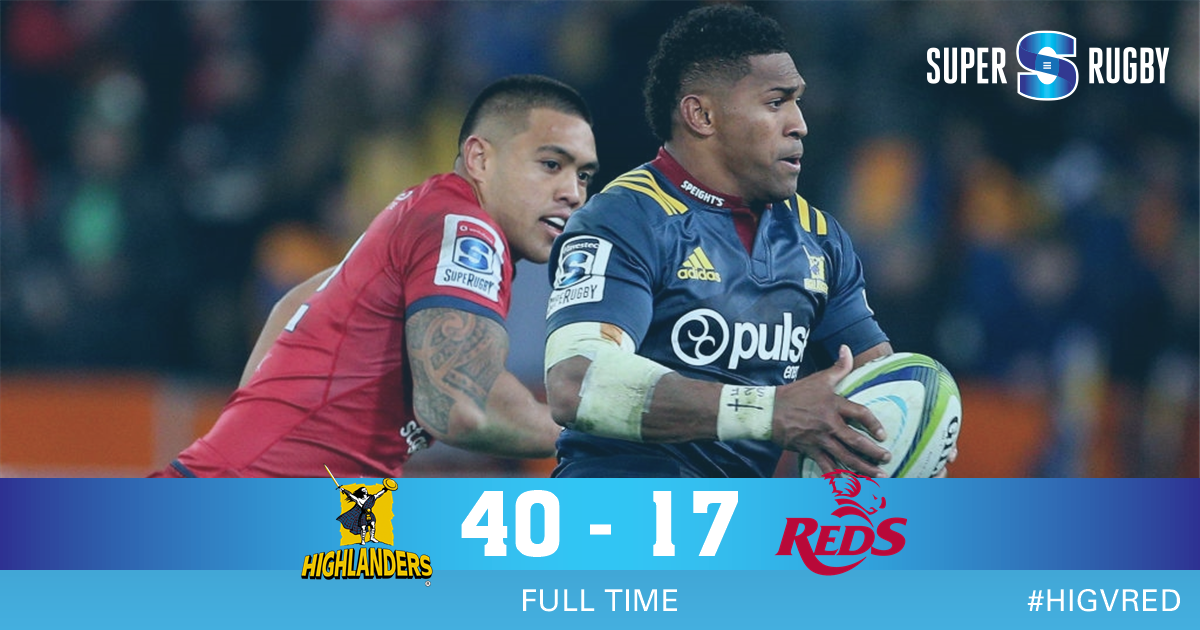