The Crusaders advanced to the Super Rugby semi-finals with a 17-0 victory over the Highlanders at AMI Stadium in Christchurch.

Tries from Kieran Read and Codie Taylor proved too much for the Highlanders who went scoreless.

A state of emergency had been declared in Christchurch and Otago due to flooding. This meant the Highlanders were not able to fly out to Christchurch on Friday as their plane was grounded. Instead, they only arrived at 13:30pm on Saturday which must have affected their pre-match preparations.

It was a match played in extremely wet and cold conditions and both sides had to adapt their usual attacking tactics for a tighter, more controlled game.

The result means the Crusaders continue their excellent playoff record in which they have never lost a home playoff match over 16 games.

The Crusaders adjusted to the conditions better and completely dominated possession and territory. They kept hold of the ball well despite the difficult conditions whereas the Highlanders could not and often kicked possession away cheaply.

The Highlanders were forced to make a slew of tackles and had already made 100 tackles after 50 minutes compared to the Crusaders' 38. This is simply because the Crusaders' ball retention was far superior.

Also, the Highlanders were guilty of indiscipline, giving away seven penalties compared to the Crusaders' two in the first-half. The second half was different and saw no penalties conceded in minutes 40-60.

It is not often the Highlanders are kept to zero, which is a combination of how good the Crusaders were and the conditions.

The Highlanders were dealt an early blow when Liam Squire was yellow-carded for a reckless tackle with five minutes gone on the clock. Richie Mo'unga put the Crusaders into a 3-0 lead from the resulting penalty.

The away side were guilty of more indiscipline but this time Mo'unga let them off the hook as he missed a routine penalty.

The wet conditions meant points were going to be at a premium with both sides opting for poles when on offer. Unfortunately, Mo'unga was having difficulty planting his standing foot on the slippery surface and missed a second successive penalty.

From the next penalty, the Crusaders opted for touch five metres out instead of pointing to the poles. After some patient, controlled carrying around the fringes, Read eventually burst over after 15 phases vindicating his decision not to take the three points. Mo'unga added the extras to extend the Crusaders' lead to 10-0.

Three minutes before half-time, a Crusaders try was controversially ruled out when their unstoppable driving maul crashed over the line but the TMO ruled that it had been held up.

However, the Crusaders were not going to be denied their try. From the resulting five-metre scrum, the Crusaders once again patiently worked the ball around the fringes through their big forwards. This time hooker Taylor burrowed over. Mo'unga converted the try as the home side took a 17-0 lead into the half-time break.

Both sides did well to repel each other in the second-half but offered little on attack. In fact, no points were scored in the second stanza despite the Highlanders' efforts to run the ball. 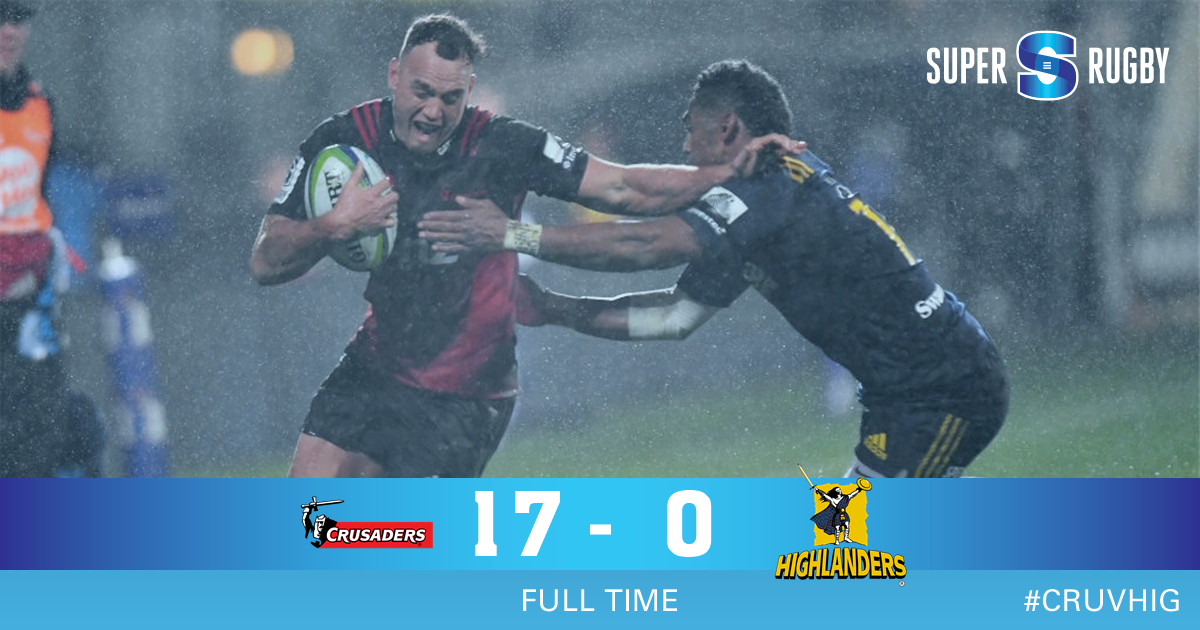