Stormers Get the Better of Spirited Jaguares

The Stormers got their Super Rugby campaign off to a winning start when they beat the Jaguares 28-20 in Cape Town.

In a fast-paced and entertaining match, both sides gave the ball plenty of air although this match will not be used in coaching manuals as the two sides' defence left a lot to be desired.

Both sides scored three tries apiece although the Stormers were made to work hard for this win as the Jaguares fought back bravely in the second half and were unlucky to miss out on a losing bonus point.

The opening exchanges were evenly contested and it was the visitors who drew first blood courtesy of a Nicolas Sanchez penalty in the fifth minute after Nizaam Carr infringed at a ruck.

Both sides gave their all in a bid to gain the ascendancy although the Stormers spent most of the next 15 minutes camped inside the visitors' half.

And they were rewarded in the 19th minute when Damian de Allende ran onto a pass from Dillyn Leyds just outside the visitors' 22 and set off on a superb run, in which he beat four defenders, before diving over under the posts.

Damian Willemse added the extras but shortly after the restart, Steven Kitshoff was penalised at the breakdown and Emiliano Boffelli narrowed the gap when he slotted a monster penalty from the halfway line.

Both sides continued to attack although the Jaguares suffered a setback in the 26th minute when Joaquin Tuculet was sent to the sin bin for slowing the ball down cynically at a ruck deep inside his 22.

Two minutes later, Willemse added a penalty and the Stormers made their numerical advantage count shortly afterwards when, after a lineout on the edge of the Jaguares' 22, the ball was shifted to Siya Kolisi who bumped off Bautista Ezcurra in a big collision in midfield before outpacing the cover defence to score his side's second try.

The Stormers made a terrific start to the second half when, from the kick-off, they took the ball through a couple of phases before striking out wide where Nizaam Carr carried strongly.

He got a pass out to Raymond Rhule close to the Stormers' 10-metre line and the Springbok wing proceeded up to the halfway line where he sold Gonzalo Bertanou an outrageous dummy before sprinting away to score his first try for his new team.

Willemse did well to land a difficult penalty from close to the touchline but the visitors were soon camped inside the Stormers' half and were rewarded in the 46th minute when Boffelli stepped past a couple of defenders before crossing for his side's first try.

That try boosted the Jaguares' confidence as they dominated the possession and territorial stakes over the next 20 minutes. The Stormers were under the cosh during that period although Willemse slotted a penalty in the 57th minute which would prove crucial in the bigger scheme of things.

However, things went pear-shaped for the home side in the 65th minute when Ramone Samuels was yellow card for an infringement at a ruck close to his try-line.

With a man down, the home side were battling, especially in the scrums and three minutes later they capitulated in the set-piece close to their try-line and referee Jaco Peyper awarded a penalty try to the Jaguares.

The final 10 minutes was a crazy affair as the visitors went in search of the win but Willemse secured the result for the Stormers when he slotted a penalty shortly before full-time. 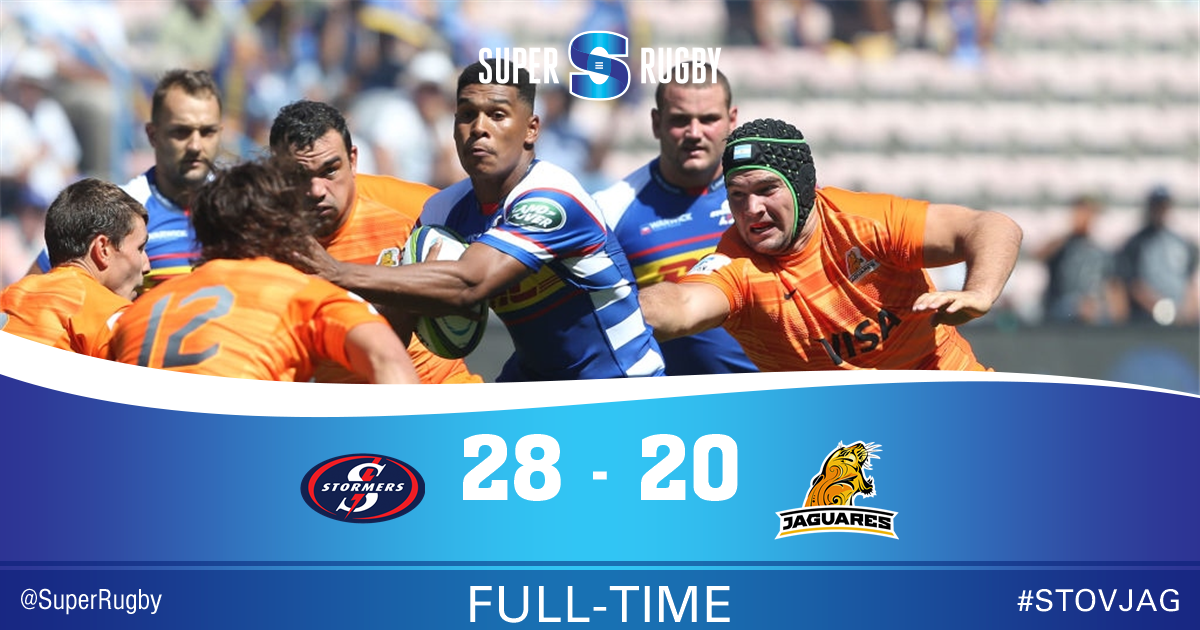