Lions Hold On To Deny Sharks

The Lions secured a hard-fought 26-19 victory over the Sharks in Super Rugby opening day action at Emirates Airline Park in Johannesburg.

It stretches the Lions' unbeaten record against South African opposition to 18 straight matches and seven against the men from Durban.

It was a typically confrontational South African derby between arguably two of South Africa's best. The Lions enjoyed the better of the first half, while the Sharks were superior in the third quarter but faded in the final quarter as the Highveld altitude began to tell.

The Lions lineout was wobbly all afternoon while the Sharks' was immaculate. Lions hooker Malcolm Marx couldn't find his jumper on four occasions, with Stephan Lewies and captain Ruan Botha making themselves a nuisance for the Sharks.

However, the men from Johannesburg completely dominated the scrum and ultimately that was where the game was won, with Jacques van Rooyen, in his 50th appearance, particularly brutal on Thomas du Toit. In fact, such was the Lions dominance, that the Sharks won only four of their ten scrum feeds.

Yet it was the Sharks who enjoyed the early possession and territory and were rewarded with the game's first try.

After the home side were penalised for bringing down a Sharks maul five metres out, the away side opted for touch and the driving maul once again. This time, the maul was legally halted. From the ruck, Cameron Wright spun a good, flat pass out to his left for halfback partner Robert Du Preez to run on and beat the last man for his maiden try for the Sharks on debut. He converted to give the visitors a 7-0 lead with ten minutes gone.

But soon after, the hosts hit back. From a five-metre attacking lineout, the ball was shifted out to Marx who got his side over the advantage line with a powerful carry up the middle. The ball was recycled out to the right, where Harold Vorster found Lionel Mapoe who ran a fantastic line to beat his defender and dot down. Jantjies converted to level matters at 7-7.

The momentum had now shifted to the Lions who began to turn the screw as they began to make carry after carry.

It took a moment of individual brilliance from Aphiwe Dyantyi on his Lions debut to give the hosts the lead. Beating the first defender with a burst of speed, he put the ball to boot, ran around the next defender and collected the ball before dotting down with the hosts taking a 14-7 lead in to the interval.

As if to emulate his opposite number Dyantyi, Sibusiso Nkosi produced a spectacular one-handed finish in the right-hand corner, somehow managing to stay within the field of play after the Sharks had started the second half like a house on fire with ball-in-hand attacking rugby. Du Preez missed the conversion.

The Lions survived this ten-minute onslaught after the break, absorbed the pressure and went up the other end of the field to grab the lead back. Andries Coetzee made the initial break to send the Sharks defence backpedalling. Mapoe grabbed his brace using the decoy runners on his right to run through a scrambling Lions defence untouched.

Makazole Mapimpi became the third player on the day to score on their debut when he profited from a beautiful long pass from Cameron Wright over the top to find the winger out on the left wing for the simplest of run-ins as the Sharks hit back immediately. Du Preez's conversion made it just a two-point game at 21-19 to the Lions.

Kwagga Smith was the sharpest man on the field when he sniped over from a quick tap penalty which caught everyone unawares to extend the Lions' lead to seven.

Despite being camped on their own try-line in the face of persistent Sharks pressure, the Lions showed grit and determination to deny the men from Durban any further points and hold on for the victory. 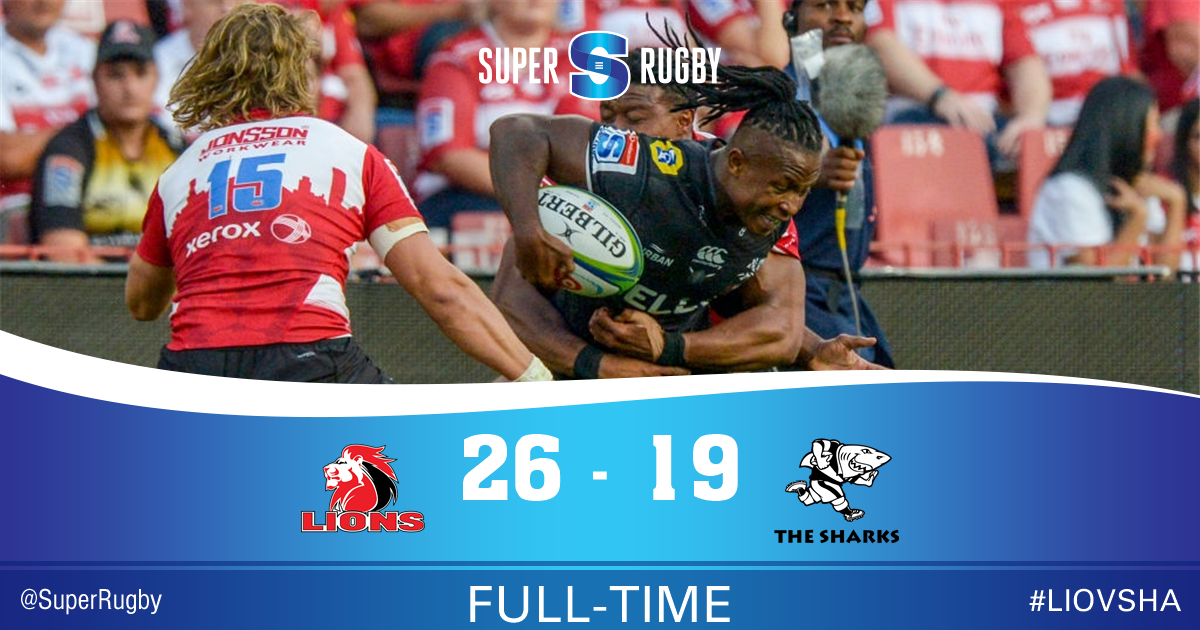