The Sharks scored seven tries as they racked up a half-century of points to beat the Sunwolves 50-22 at Kings Park in Durban on Saturday.

The Sharks opened the scoring in the third minute with a penalty from fly-half Robert du Preez after the Sunwolves were guilty of straying offside.

In the 10th minute, the Sharks had their first try. Taking the ball through the phases, Du Preez switched the ball out left with a long skip pass to Makazole Mapimpi on the overlap, who finished off a superb team try. Du Preez added the extras for a 10-0 lead.

The Sunwolves were exerting a fair amount of pressure with the Sharks showing excellent defence to keep them out. However, Harumichi Tatekawa did slot a penalty in the 25th minute after a Sharks' tackler was penalised for not rolling away.

But the hosts extended their lead on the half-hour mark through a magnificent individual effort from recent acquisition Akker van der Merwe, who had been rewarded with his first start since moving from the Lions and certainly appeared to be grabbing his opportunity with both hands.

From a pick and go, Van der Merwe bumped off a couple of defenders before displaying good pace to show Kotaro Matsushima a clean pair of heels who gave the hooker the outside to dot down thinking he would pass to Sbu Nkosi on his inside.

The Sharks grabbed their bonus-point try five minutes before the interval when Tera Mtembu crashed over following good interplay between Lukhanyo Am and Andre Esterhuizen, after the latter had made the initial break as the Sharks took a 24-3 lead into the interval.

Five minutes after the break, the Sunwolves had their first try of the game, just reward for the pressure they had exerted on the Sharks. After a series of powerful carries from their forwards, the call came to go to the backs. Scrum-half Keisuke Uchida spread the ball out right to Matsushima who did excellently to get on the outside of the Sharks defence before drawing the last defender and producing a classy one-handed offload out the back of the hand for Lomano Lemeki to receive and dot down.

Soon after, the Sharks hit back. From a scrum, it was Jacques Vermeulen with the ball out the back to Du Preez, who produced another excellent long skip pass for Mapimpi, who skinned the last defender expertly to run in for his brace.

Jacques Vermeulen got in on the act when he profited from Cameron Wright's slick passing since coming on as a substitute to get on the outside of his man and run through the under posts. Du Preez's conversion made it 36-8 after 54 minutes.

The Sunwolves responded five minutes later through Wimpie van der Walt, who showed good leg drive to power his way over from close range with the help of loose forward partner Willie Britz.

The next Sharks score came courtesy of enterprising play from Curwin Bosch who saw there was no one at home, putting a kick in behing the Sunwolves defence, with the ball bouncing for Nkosi to pick up and shrug off the last defender before dotting down.

After the Sharks had knocked on, the Sunwolves had the feed to a five-metre scrum on their try-line. The Sharks drove them back and Sunwolves substitute scrum-half Yutaka Nagare failed to control the bouncing ball with opposite number Wright pouncing on the loose ball to dot down. Du Preez's conversion made it a half century of points for the home side.

Excellent interplay between the Sunwolves backs saw Lemeki making the break before feeding Will Tupou who cut inside to finish clinically as the men from Tokyo went down 50-22 in the end. 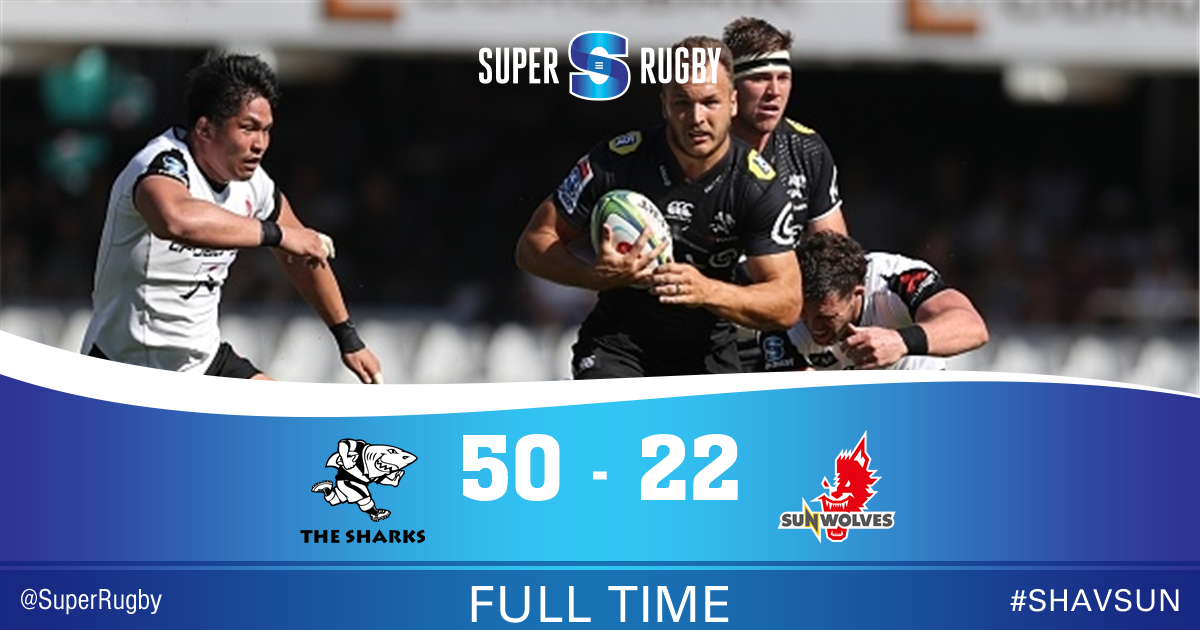