Brumbies Fight Back to Cruise Past Reds

The Brumbies came back from 15-0 down to claim a 45-21 bonus-point win over the Reds in an entertaining derby in Canberra on Saturday.

The home side were under the cosh for large periods early on but took control of proceedings as the match progressed and eventually outscored the Reds seven tries to two with Isi Naisarani leading the way with a deserved brace.

The result is a significant one for the Brumbies as it means they move above the Brisbane-based outfit into third position of the Australian Conference standings, six points adrift of the Melbourne Rebels, who are in first place.

The Reds were fastest out of the blocks and were rewarded as early as the sixth minute when Chris Feauai-Sautia beat a couple of defenders before offloading to Taniela Tupou, who crossed for the first try.

The visitors dominated the possession ant territorial stakes for the next 20 minutes and after Jono Lance slotted a penalty in the 17th minute, Feauai-Sautia crossed for their second try five minutes later which gave them a 15-0 lead.

The Brumbies eventually came to life in the 27th minute when, from a lineout drive on the Reds' five-metre line, Folau Fainga’a barged over for his first Super Rugby try.

Wharenui Hawera converted before Lance succeeded with another penalty which meant the visitors led 18-7 by the half-hour mark.

The Brumbies narrowed the gap in the 34th minute when Naisarani crashed over for his first try, from close range, before Feauai-Sautia was yellow carded for a defensive foul, and although the Reds led 18-12 at half-time, the Brumbies were slowly gaining the initiative.

Naisarani's try proved crucial as the Brumbies continued where they left off in the first half, when they came out after the break, and they were rewarded with tries from Chance Peni and Rory Arnold soon after the restart.

Arnold's five-pointer was a memorable one as the big second-row did well to outsprint several defenders before crossing the whitewash. That try was converted by Christian Lealiifano which gave the Brumbies a 22-18 lead before Lance added another penalty in the 61st minute to reduce the deficit to three points.

But despite that penalty, the Reds faded badly and the final quarter was dominated by the home side.

In the 66th minute, the Brumbies took the ball through several phases inside their opponents' 22 before Sam Carter crossed for their fifth try and Lealiifano's conversion meant they had a 10-point lead with the clock winding down.

They did not take their foot off the pedal though and late tries from Naisarani and David Pocock sealed an emphatic win for the two-time champions. 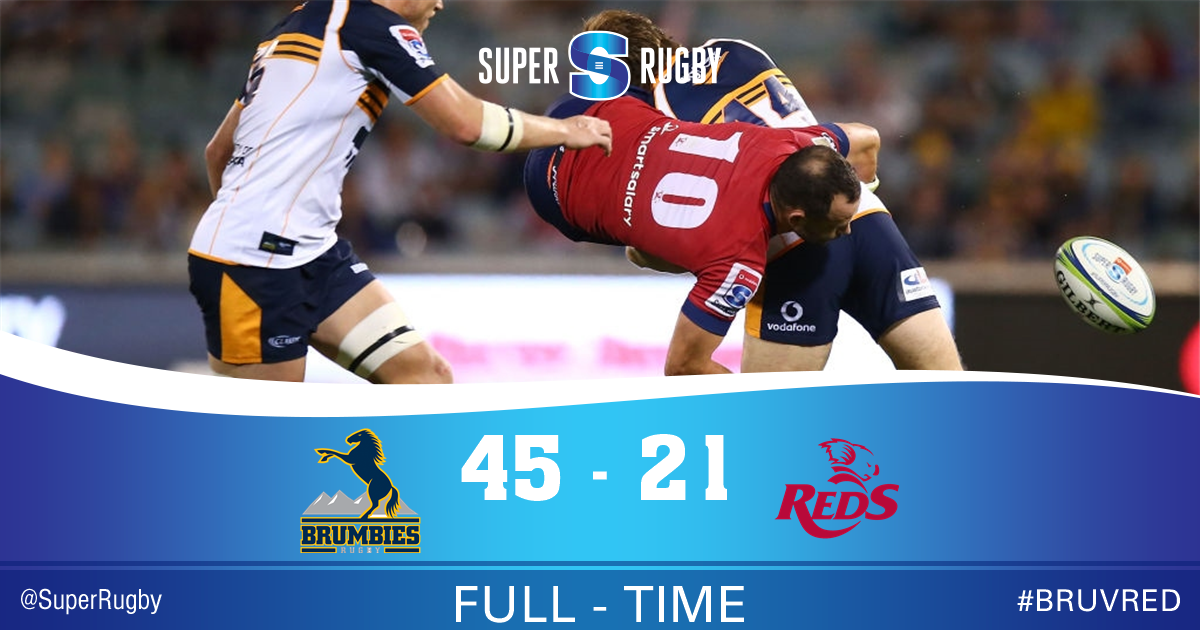