The Lions thumped the Stormers 52-31 after amassing 31 points in the first-half in the South African Super Rugby derby at Ellis Park on Saturday.

This win means the Lions extend their unbeaten streak against South African Super Rugby sides, their last defeat, incidentally, was against the Stormers back in 2015 in Johannesburg.

Robbie Fleck's men were shell-shocked after speedster Madosh Tambwe completed his hat-trick within 15 minutes, one of the fastest in Super Rugby history. This saw the Lions race to a 19-0 lead in the opening quarter of the match with Elton Jantjies succeeding with two of the three conversion attempts.

Relentless on attack and extremely composed on defence, the Lions never allowed the Stormers any window of opportunity to reduce the deficit. The home side made an astonishing 136 tackles, 53 more than the Stormers' 83 hits. Thoroughly outplayed in both halves, the Stormers never seemed like forging a come-from-behind victory.

It was rapid thinking from the home side which allowed them to get into ideal positions to convert territory and possession into points.

The men from Johannesburg scored eight tries to three, en route to an emphatic win in front of their passionate supporters. The Lions eight five-pointers were made up of Tambwe's four and a try a piece by Lionel Mapoe, Kwagga Smith, Franco Mostert and Ruan Combrinck.

Tries for the Cape Town side were scored by Wilco Louw, Damian Willemse, and Paul de Wet.

Tambwe gathered an aimless dink over the Lions backline by Willemse, deep inside his side's own half. The speedster swerved through a few Stormers defenders dotting down for his first five-pointer in the opening two minutes. Jantjies added the extras, 7-0.

The 20-year-old was over the Stormers whitewash again, less than ten minutes later. This time he powered through an EW Viljoen tackle, crashing over from close range, Jantjies missed the subsequent conversion, 12-0.

The visiting side finally got their first points on the board when Bok front rower Louw muscled his way through a Hacjivah Dayimani tackle, SP Marais added the extras, 19-7.

Clinical play from the Lions, at the set pieces, restricted the visitors in gaining any form of momentum.

Despite being totally outplayed at nearly every facet of the game, in the opening quarter, the Louw try seemed to have sparked the Stormers to claw their way back into the match, but that was about all that the Stormers had to offer. The Lions just stepped up, both on attack and defence.

Mapoe's try meant that the home side temporarily secured the bonus point for scoring three tries more than the Stormers. Jantjies missed the kick from virtually up against the touchline, 24-7.

Adding insult to injury, Blitzbok stalwart, flanker Smith, scored on the stroke of halftime for the home side, Jantjies succeeding with the conversion meant the players headed into locker rooms with the home side comfortably in a 31-10 lead.

The Lions continued where they left off in the first half with captain Mostert diving over for his side's sixth try, extending their lead to 38-10. Tambwe left the field limping early in the second half, but not before he added his fourth try.

Talented Willemse danced his way through and around a few Lions tacklers to get his side's second try, which Marais converted, 45-17. This was, however, cancelled out when Combrinck dived over after the Lions created an overlap out wide, Jantjies converted from virtually up against the touchline, 52-17.

A late consolation try for the Stormers via replacement scrum-half De Wet, which Willemse converted meant the scoreboard read 52-24 as the final five minutes approached. An 85th-minute penalty try awarded to the visitors secured an enthralling 52-31 bonus point victory for the Lions. 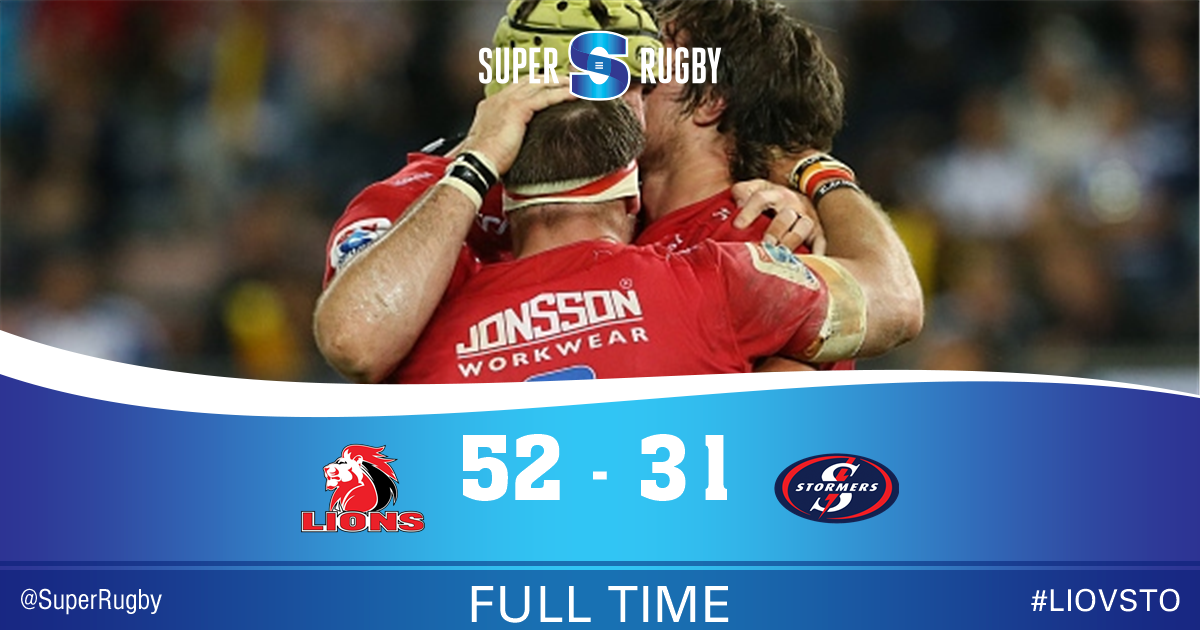