Jaguares come from behind to down Rebels

The Jaguares returned to winning ways when they claimed a deserved 25-22 come-from-behind victory over the Rebels in Melbourne on Friday.

As the scoreline suggests, this was a thrilling encounter although the Rebels will be kicking themselves as the dominated for large periods. Both sides scored three tries apiece although the visitors finished stronger and eventually took control of proceedings in the second half.

The win means the Jaguares move into fourth place on the South African Conference table, above the Bulls, while are still at the top of the Australian Conference although that situation could change if the Waratahs beat the Reds later on Saturday.

The Jaguares had the better of the early exchanges and opened the scoring in the eighth minute via a Nicolas Sanchez penalty.

The home side soaked up the early pressure and three minutes after that penalty they took the lead courtesy of a well-taken try from Billy Meakes after Will Genia laid the groundwork with a brilliant line break in the build-up.

Jack Debreczeni added the extras which extended the Rebels lead and they continued to dominate as the half progressed.

That dominance reaped reward in the 18th minute when Debreczeni and Meakes combined to create space for Dane Haylett-Petty inside the Jaguares' 22 and the full-back offloaded to Marika Koroibete, who crossed in the left-hand corner.

The rest of the half was evenly contested although no further points were scored during that period as both sides committed numerous unforced errors on attack.

The Jaguares had a chance to narrow the gap on the half hour-mark when Adam Coleman was penalised for a high tackle on Tomas Lavanini but Sanchez's shot at goal was off target.

That meant the Rebels held a 14-3 lead at half-time but the Jaguares reduced the deficit five minutes after the restart when Sanchez landed a penalty after Amanaki Mafi infringed at a ruck.

Five minutes later, the Rebels scored their second try with Dane Haylett-Petty rounding off after Meakes and Genia combined brilliantly in the build-up.

The visitors did not take that lying down and shortly afterwards, Sebastian Cancelliere crossed for their first try after great work from Joaquin Tuculet, who glided through a gap in the Rebels defence before getting a pass out to Cancelliere.

Sanchez's conversion made it a six-point game and the Rebels were dealt another setback when Tetera Faulkner was sent to the sin bin for a cynical foul on defence close to his try-line.

Two minutes later, the visitors were rewarded with their second try when Ramiro Moyano showed great determination to power through three defenders on his way over the whitewash.

Sanchez failed to convert which meant the Rebels held a slender 19-18 lead but Debreczeni added a penalty in the 65th minute which gave his side some breathing space.

Momentum was with the visitors during the latter stages of the match, however, and in the 75th minute Leonardo Senatore charged down an attempted clearance from Michael Ruru inside the Rebels' 22 before the veteran back-row regathered. Senatore was brought to ground but the ball was shifted to Bautista Ezcurra, who cantered in for his side's third try.

Sanchez slotted the conversion which gave his side a three-point lead but more drama was to follow during the game's closing stages. This, when Rebels captain Adam Coleman turned down the chance to take a shot at goal when his side were awarded a penalty just outside the Jaguares' 22.

Instead, the Rebels opted for a scrum but despite taking the ball through several phases, the Rebels won a crucial turnover and held on for the win. 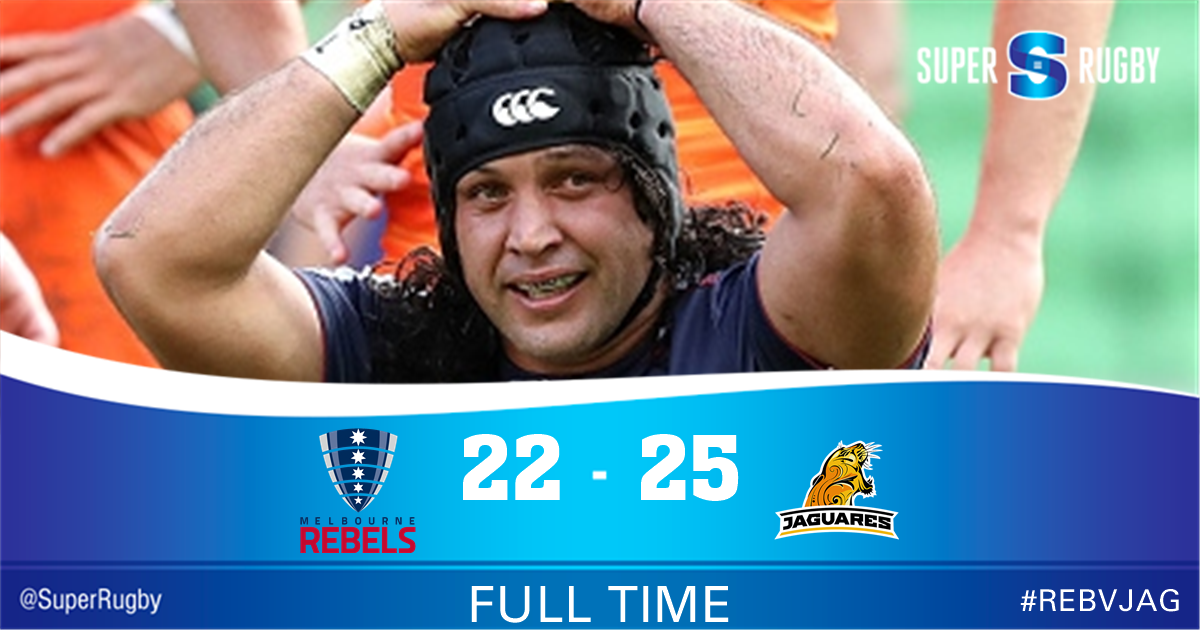