Stormers out class the Bulls in physical clash

The Stormers continued with their fine recent form when they beat the Bulls 29-17 in their Super Rugby clash at Newlands on Saturday.

In a typical South African derby, filled with lots of physicality, momentum between the two sides ebbed and flowed before the Stormers took control of proceedings and eventually outscored their visitors four tries to two.

The result means the Stormers move above the men from Pretoria in to third position in the South African Conference.

The Stormers made a terrific start and thought they had opened the scoring as early as the fourth minute when Chris van Zyl crossed the whitewash but, after checking with his TMO, referee Glen Jackson ruled that the final pass from Dewaldt Duvenhage was forward.

Despite that setback, the home side made a statement of intent when their forwards shoved their counterparts off the ball at the resulting scrum and from the turnover, the ball went out to Damian Willemse who took on the Bulls defence before diving over for the opening try.

Willemse kicked the conversion and the Stormers continued to hold the upper-hand during the next 10 minutes.

They were soon camped inside the Bulls’ 22 again and increased their lead in the 11th minute when Wilco Louw crashed over from close quarters for their second try.

That did not deter the visitors though and they narrowed the gap midway through the half when Lood de Jager glided through a hole in the Stormers defence – after the ball went through several pairs of hands in the build-up – before crossing under the posts. 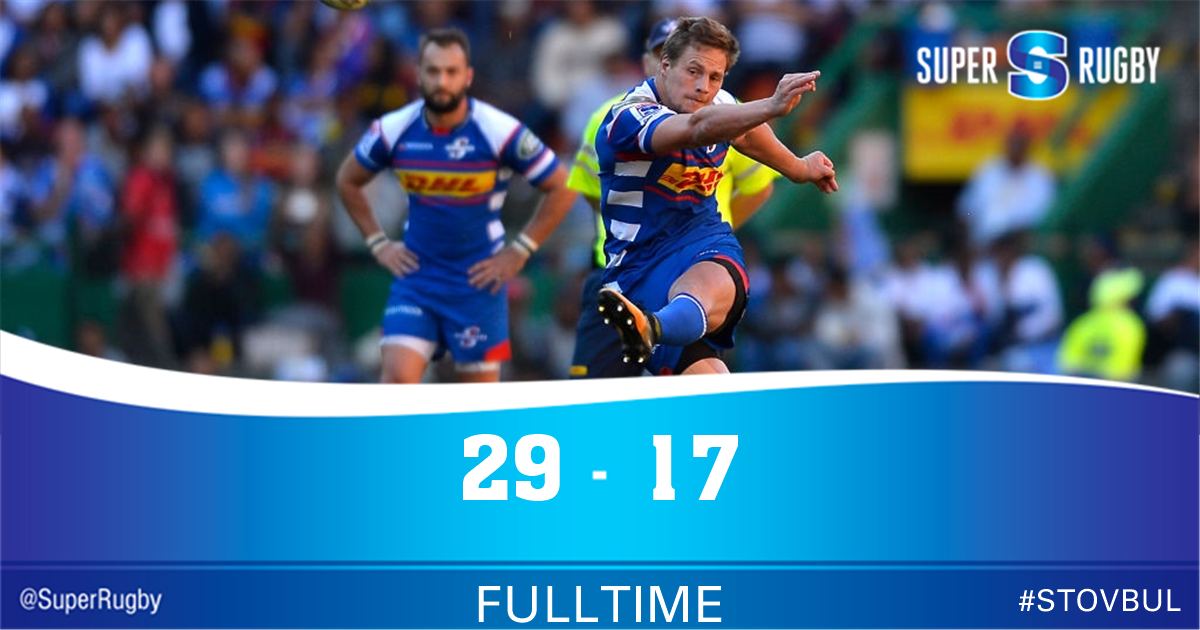 Handre Pollard added the extras which meant the Stormers led 12-7 but the hosts were dealt a blow in the 33rd minute when Ramone Samuels was yellow carded for a late tackle on Pollard.

The Bulls pivot slotted the resulting penalty which meant the Stormers held a slender two-point lead as the teams changed sides at the interval.

The visitors were fastest out of the blocks after the restart and eight minutes into the second half they took the lead when Jason Jenkins burst through a tackle from Sikhumbuzo Notshe, inside the Stormers’ 22, before scoring his side’s second try.

Pollard made no mistake from the kicking tee which gave his side a 17-12 lead but the Stormers soon regained the initiative.

Shortly afterwards, Damian de Allende set off on a bullocking run inside the Bulls’ half and sold Divan Rossouw an outrageous dummy before offloading to SP Marais, who crossed for a deserved try.

Willemse’s conversion meant the Stormers held a 19-17 lead and the hosts made it 22-17 shortly afterwards when Marais added a penalty from just inside his half.

The Stormers had their tails up now and in the 62nd minute, Samuels made up for his earlier indiscretion when he barged over for his side’s fourth try after Raymond Rhule and De Allende did well with strong carries in the build-up.

The final quarter was an arm wrestle and although the Bulls tried desperately to haul in their hosts, they could not score another try which would have secured them a losing bonus point.