The Brumbies claimed a 38-28 come-from-behind victory over the Bulls with fourteen men at Loftus Versfeld in Pretoria on Saturday.

Tries from Kyle Godwin, Lachlan McCaffrey, Folau Fainga’a, Tom Banks and Andrew Muirhead proved too much for the Bulls who scored through Handre Pollard, Johnny Kotze and Roelof Smit.

Try-scorer Fainga’a got sent off in the 60th minute which looked to sway the the momentum in favour of the Bulls, but instead it galavanised the Brumbies, who sparked in to life, scoring two excellent tries in this period to complete a remarkable turnaround.

The Bulls opened the scoring in the fourth minute. After Jonny Kotze had made good ground down the left flank, the ball was recycled to Springbok fly-half Pollard who got on the outside of Brumbies prop Scott Sio to break clean through the defence and dot down.

But the Brumbies bounced straight back from the restart. The Bulls spilt the ball from the Brumbies’ kick-off, with the Brumbies pouncing on the loose ball and making the Bulls pay with Godwin turning on the after-burners and sprinting all the way over the line.

Brumbies fly-half Christian Lealiifano gave the visitors the lead for the first time in the match with a penalty after Bulls lock RG Snyman was penalised for taking out the scrum-half off the ball.

Soon after, the Bulls wrested back the lead when flanker Smit ran a superb angle off to power his way over after Kotze had done well to get the Bulls deep in to Brumbies’ territory. Pollard’s conversion made it a 14-10 lead to the Bulls with 20 minutes gone. 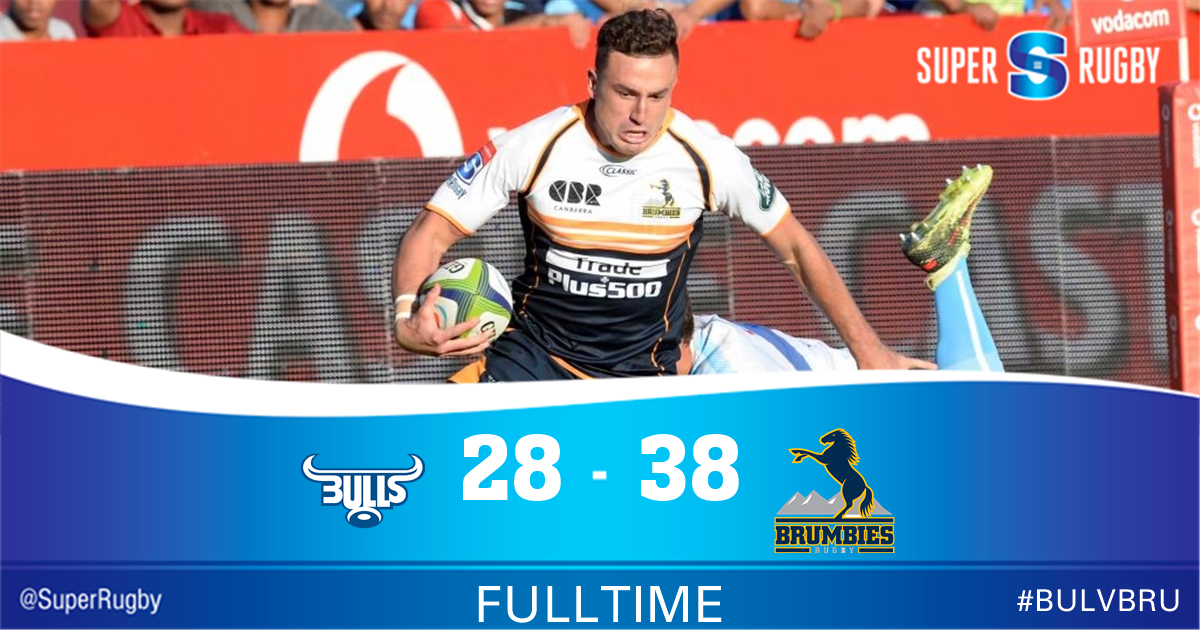 The Bulls completely dominated the last quarter of the first half but were denied by some heroic Brumbies’ defending, with the Canberra outfit having to halt maul after maul as the Brumbies went in to the interval only trailing by four.

Three minutes after half-time, the Brumbies were in the lead. Joe Powell made a sniping dart off the back of the scrum, excellently spotting the open space and scything through the Bulls defence before getting the offload away for McCaffrey to finish.

But the Bulls hit back to take the lead once again. Warrick Gelant created it, with his weaving run and pass setting Kotze clear down the left-hand touchline for his sixth try of the season. Pollard stretched the difference to eight points with a penalty after the Brumbies were penalised for tackling a player in the air.

Soon after, the Brumbies responded when Fainga’a burst over from close range following a series of powerful carries from the Brumbies forwards after the driving maul had got the Australian outfit close. Lealiifano’s conversion reduced the deficit to just a single point with a quarter of the match to go.

Having just scored a try, Fainga’a turned from hero to villain when he was red-carded for headbutting debutant replacement Matthys Basson. Pollard slotted the resulting penalty between the uprights to make it 28-24 to the home side.

Despite going down to 14 men, Banks scored a magnificent individual try beating several defenders for pace including Boks Jesse Kriel and Warrick Gelant in a scintillating run on his way to the try-line to cap a superb individual performance. Replacement fly-half Wharenui Hawera added the extras for a 31-28 lead.

The remarkable comeback was complete when winger Muirhead went over in the left-hand corner with plenty of space on the overlap to spare. John Mitchell would have been livid with his troops to have thrown a 28-24 lead away with an extra man.

Hawera’s conversion secured a deserved 38-28 victory for the visitors in the end.