Jaguares impress as they defeat Stormers

The Jaguares claimed their seventh win in a row with a 25-14 victory over the Stormers at Estadio Jose Amalfitani in Buenos Aires.

The Jaguares now go within three points of the Lions at the top of the South African Conference with a game in hand.

It is hard to believe that this Jaguares team is the same group of players that were so dismal in Argentina’s defeat to Scotland last weekend.

Tries from Bautista Delguy, Guido Petti and Matias Orlando proved too much for the Stormers who scored through Sikhumbuzo Notshe and Dillyn Leyds.

The Jaguares began the brighter of the two sides and opened their account with a Nicolas Sanchez penalty after the Stormers had infringed at the breakdown.

The possession was very much with the Argentine side who extended their lead a couple of minutes later with a magnificent individual effort from winger Delguy, who stepped his way past no less than four Stormers defenders in a scintillating run to the try-line. Sanchez added the extras for a 10-0 lead. 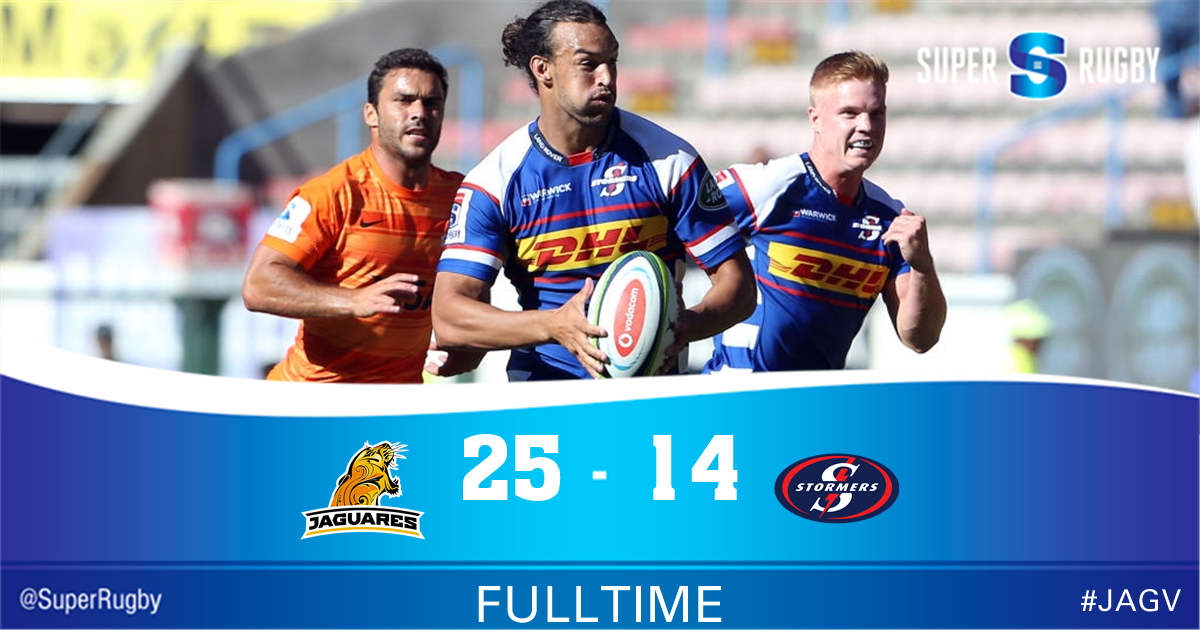 Soon after, it was 15-0. Turned over by the Jaguares on the Stormers ten metre line, the ball was kicked ahead with lock Petti the first of all people to pounce on the ball and show great pace to sprint to the line.

However, the Stormers began to turn the momentum of the game and impose themselves at scrum-time and their first try came from that particular set-piece as they built a couple of phases before Notshe showed good pace to scythe through the Jaguares defence, who were surprised by the Blitzboks’ pace. Stormers fly-half Jean-Luc du Plessis made no mistake with the conversion as the visitors went into the interval trailing 15-7.

After the break and against the run of play, the home side extended their lead to 22-7. It came after Stormers lock Jan de Klerk coughed up the ball in midfield with his opposite number Petti the man to pounce on the loose ball and once again show tremendous pace as he was halted a couple of metres short. The ball was recycled to Orlando who was on hand to execute the finish with Stormers unable to reorganise in time.

But with 20 minutes to go, the Stormers hit back. It was set up by the forwards who made some powerful carries before the ball was switched out to Leyds, who stepped inside and then out past a couple of defenders to complete a lovely finish and bring the Stormers back in it. Du Plessis added the extras as the Stormers went into the last quarter trailing 22-14.

But the Jaguares controlled the remainder of the tie well, as Sanchez added another penalty to close out a 25-14 victory.