The Bulls thrashed the Stormers 40-3 in their Super Rugby Round One encounter at Loftus Versfeld on Saturday. Pote Human’s side ran in four tries without reply, picking up the bonus point in the process.

It started with lineouts. It developed with decisive defence and it cashed in on brilliance.

The match started late, because the Stormers were delayed by an accident on the N1. They perhaps would have preferred the delay to last much, much longer, but they did not make the delay an excuse.

At half-time, the Bulls were leading 21-3. Five minutes into the second half it was 28-3 – four tries, a bonus point and the near certainty of victory. And so they sat back, ensured that the Stormers were not going to get close to scoring, kicked penalties at goal and stayed calm.

In that first half the Stormers had better chances of getting usable possession. The penalty count  was 7-1 in their favour, they had 11 lineouts to six and four scrums to one.  But they scored no tries, while the Bulls raced away with three.

There are two major aspects to rugby – attack and defence. The Bulls won the defence hands down. Their tackling was swift and precise. The Stormers had times when they went through jittery phases but they were phases of defeat, for they could not advance. The Bulls made in the region of 130 tackles and missed 10. That already is a winning performance.

Then they turned four moments of brilliance into tries – two from far out by electric Rosko Specman, one from far out by Johnny Kotze and the third from a perfect, delicate chip. Four brilliant tries.

Specman had  firsts all right. He was playing his first-ever Super Rugby match. From his first touch in his first match he scored his first try.

For the only time in the match, the Bulls’ handling was fragile. The ball was bobbing around till Jesse Kriel passed to Specman near the touchline on his left. The little man with the blue and white dreadlocks stepped inside, beating Dillyn Leyds, and then he sped past Wilco Louw and raced some 40 metres straight down to the goal posts, and the Bulls led 7-0 after just 5 minutes.

After the Bulls had been penalised five times in the first 10 minutes of the match, SP Marais goaled the penalty against Schalk Brits and the score was 7-3. There was no sign that the Stormers would not score again in the match while the Bulls would score 33 points.

The lineouts were a massive problem for the Stormers. They would kick a penalty for touch and then lose the lineout to Lood de Jager and his cunning band, and once they threw in skew.

The Bulls were going left when Warrick Gelant – at fullback but much more than that – turned a little pass inside to Specman  and away he scampered, more than 40 metres, to the posts. 14-3 after 18 minutes.

Jason Jenkins of the Bulls won a lineout on their left and they went right. Brits had a clever entry and gave to Kriel who passed to right wing Kotze who had an overlap. He raced away for a try far out on the right. Handré Pollard converted 21-3 after 24 minutes.

Just after this the Stormers lost their captain, Siya Kolisi who was taken off for a head injury assessment, from which he did not return to play.

It was obvious at half-time that the calmly efficient Bulls were going to win. But they wanted a bonus point and earned it after five minuets in a delicious way.

Pollard lay back and chipped a little chip over the Stormers defenders. Kriel ran through, caught the ball on the full and raced to the posts. 28-3.

The only scores in the next 35 minutes were three long-range penalties by Pollard.

It was an outstanding Bulls’ victory.

*It was not the biggest Bulls’ victory over the Stormers. That was in 2005 when the Bulls won 75-14 at Loftus Versfeld.

Man of the Match: Any candidates would be from the Bulls and could comfortably include Warrick Gelant, Rosko Specman, Jesse Kriel, Embrose Papier, Duane Vermeulen and Lood de Jager. Our choice is General Handré Pollard. 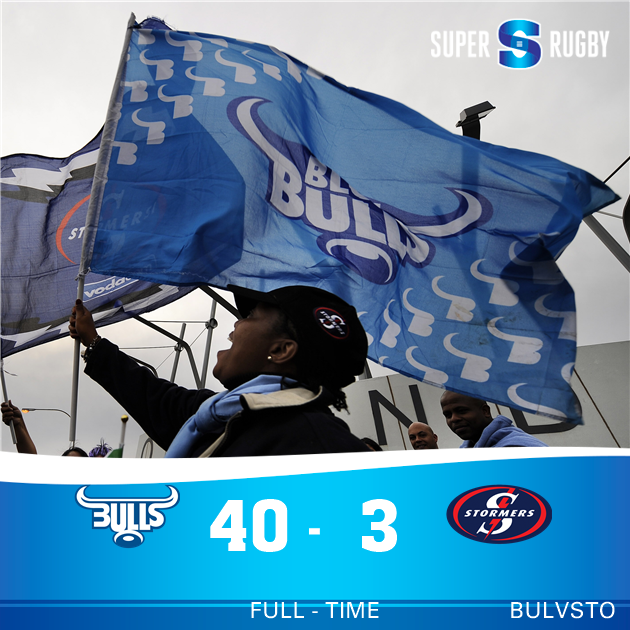