Sunwolves Claim First Ever Away Win

The Sunwolves recorded their maiden away win in Super Rugby when they beat the Chiefs 30-15 in Hamilton on Saturday.

The Japanese outfit scored three tries as opposed to the two from their esteemed opponents who conceded nine turnovers in an error-ridden performance.

The Sunwolves had as much as 60% of the ball position in the first half, and although the hosts improved in after the break, it was too little too late against a spirited opponent.

The result means the Chiefs remain at the bottom of the standings after suffering three losses to kick off the new season. The Sunwolves, meanwhile, are up to 11th on the standings, albeit it only until the remainder of the round’s games are completed.

The Chiefs were up against it from kick-off, when Damien McKenzie’s kick went straight into touch to hand the Sunwolves the initiative.

From the attacking scrum that followed, Shuhei Matsuhashi was played into space and dove over for the opener with one minute and 43 seconds on the clock.

Hayden Parker added the extras before extending the lead to 10 points with a fifth minute penalty.

The Chiefs scored their only points of the half in the 22nd minute through McKenzie’s boot, but the visitors soon had a 10-point lead again thanks to Parker’s penalty three minutes later.

Shortly after the hour mark Uwe Helu powered over the Chiefs line and although it seemed as if he was held up initially, the TMO ruled that a try had been scored. Parker again made no mistake with the conversion to make the score 23-3.

The Chiefs were the first to score after the break when Alex Nankivell dotted down for the hosts five minutes after the resumption, but Gerhard van den Heever’s converted try 10 minutes later restored the 20-point gap.

Etene Nanai-Seturo’s try in the 64th minute reduced the gap to 15 points to set up a potentially thrilling finale, but the Sunwolves’ defends stood firm as the visitors hung on for a deserved win. 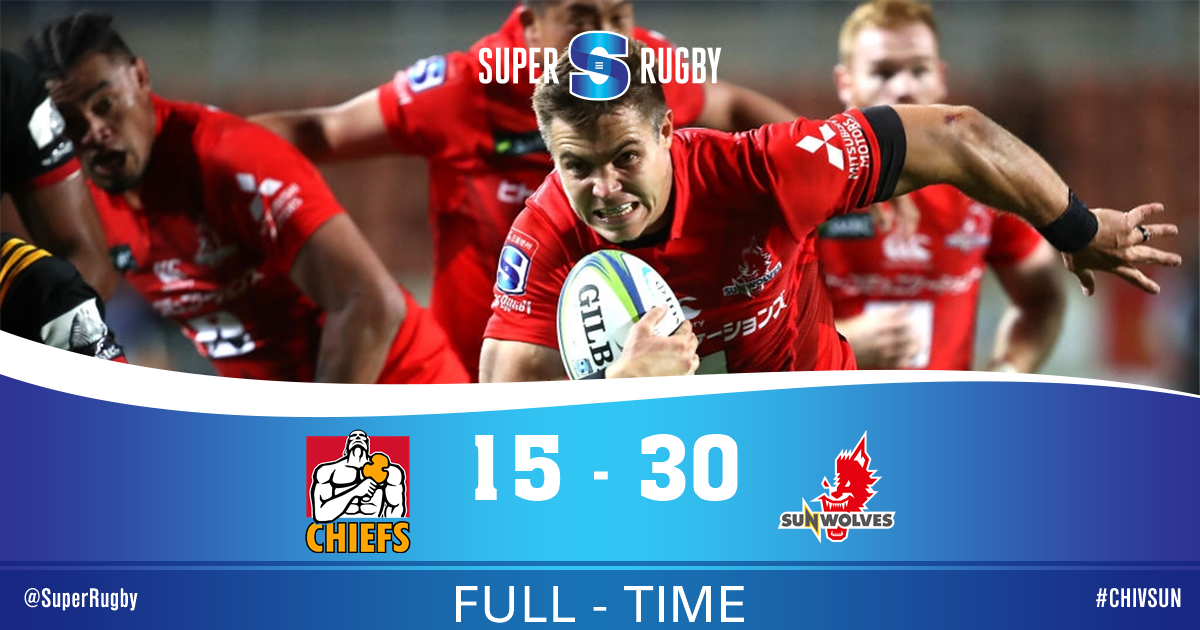