The Stormers avoided a third straight defeat with a 24-23 victory over the Bulls at Newlands on Saturday.

The Bulls have now lost eight straight games at Newlands, their last win coming in 2011 at the historic venue.

The Bulls came close to scoring the game's first try in the seventh minute after Lizo Gqoboka broke the Stormers' defensive line in midfield before being dragged down 20 metres out. The ball was reycled to the right-hand side where Jesse Kriel's pop pass looked to have released RG Snyman through a gap but the lanky lock couldn't hold on.

Soon after, the hosts went up the other end of the field and almost scored. JJ Engelbrecht showed good hands to release Dillyn Leyds down the left wing, who put the ball on to his foot but Herschel Jantjies knocked the ball on when all he had to was exert some downward pressure on the ball as it was already over the try-line.

In the 13th minute, the Stormers did indeed open the scoring. Damian de Allende made good metres with a line break in midfield. After a series of carries from the forwards, the ball was swung out to the right, where Kolisi and Kobus van Dyk showed good hands to release Sergeal Petersen in the corner for the finish. Jean-Luc du Plessis added the extras.

Handre Pollard reduced the deficit to four points half-way through the first period. But in the 28th minute, Robbie Fleck's men extended their lead. A beautiful offload from Damian Willemse released Seabelo Senatla down the left the wing, who showed searing pace to leave several defenders for dead and complete the finish after a magnificent run from just inside the Bulls' half.

Pollard chipped away at the lead with two penalties in quick succession shortly before the interval, with the hosts being penalised for offside on both occasions. 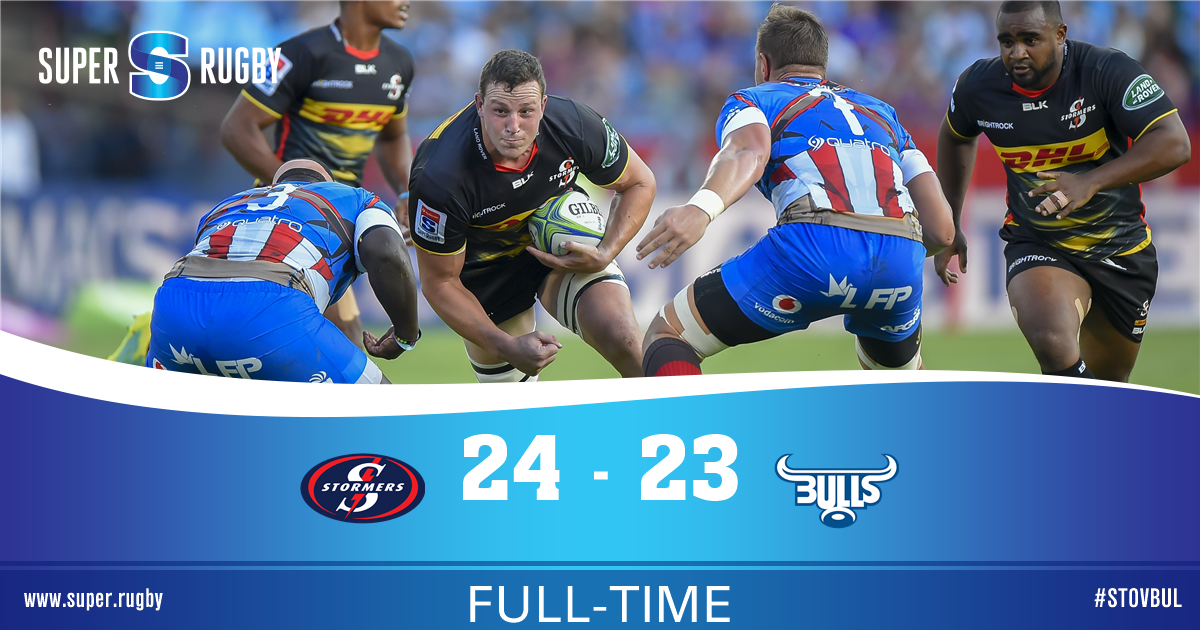 The Bulls took the lead for the first time in the game three minutes in to the second half. Willemse failed to find touch and Divan Rossouw capitalised, going on a tackle-busting run down the left wing before being dragged down 10 metres out. After a series of powerful carries from the forwards, scrum-half Ivan van Zyl scored his maiden Super Rugby try by intelligently dotting down at the base of the post. Pollard made no mistake with the conversion for a 16-14 lead.

Although the Stormers had dominated the opening period, it was the visitors who were controlling the second half. But it was the home side who regained the lead after Bongi Mbonambi did well to get himself over the ball and ensure the Bulls were penalised for not releasing as Josh Stander slotted the penalty for a 17-16 lead in the 57th minute.

Against the run of play, the Stormers extended their lead courtesy of a piece of individual brilliance from Leyds. Libbok's clearance kick allowed Leyds to counter with a mazy run in which he darted past several defenders before offloading on his way to the ground for Jantjies to complete a simple finish for his third try of the season. Stander converted for a 24-16 lead with a quarter of the game to go.

The Bulls pressed for a response but were denied by some brilliant last-ditch defending from Fleck's men. Eventually Pote Human's side hit back but only after the hooter which was a little too late when Libbok scythed through a gap in the Stormers defence and ran in under the posts with Pollard converting as the men from Pretoria left with a bonus-point.