Highlanders Edge The Jaguares in Dunedin

The Highlanders claimed a hard-fought 32-27 victory over the Jaguares at Forsyth Barr Stadium in Dunedin.

It was the Jaguares' first trip to face the Highlanders in Dunedin.

With the victory, the Highlanders leapfrog the Jaguares in to sixth position on the overall standings and remain well on course for a playoff place.

It was a scrappy start to the game with handling errors from both sides making for a stop-start encounter largely played in the centre of the field with neither side really able to penetrate deep in to opposition territory.

The visitors opened the scoring 13 minutes in. Rob Thompson's poor kick allowed Ramiro Moyano to counter. The winger fed Sebastian Cancelliere, who burst through a gap in midfield and ran a good 40 metres before putting an inch-perfect grubber kick through for Matias Moroni to collect and dot down in the right-hand corner.

The home side hit back in the 22nd minute. After building a series of well-worked phases, fly-half Josh Ioane eventually made the clean break and passed to James Lentjes, who ran in for the try.

The Argentine side extended their lead to 10-5 on the half-hour mark when Emiliano Boffelli scythed through the defence to get deep in to the Highlanders' 22.

Soon after, the Aaro Mauger's side took the lead. After, Sio Tomkinson broke the line in midfield and ran 40 metres, Aaron Smith's dummy bamboozled the Jaguares' defence before he passed to Tomkinson, who in turn released Matt Faddes over the whitewash. Ioane added the extras for a 12-10 lead.

Joaquin Diaz Bonilla put Gonzalo Quesada's side back in front from the tee in the 35th minute after Luke Whitelock conceded the penalty at the lineout. However, the Highlanders restored their lead immediately afterwards when Lentjes contested the kick-off well with the ball bobbling in behind the Jaguares' defence. The hosts turned over possession and Smith put Ioane through a gap, who got the offload away for Tomkinson to complete the finish.

Mauger's side struck again just before the interval with Liam Coltman crossing the whitewash at the back of a well-worked rolling maul after Cancelliere was penalised for being in front of the kicker. Ioane converted to give the Highlanders a 26-13 lead in to the half-time break.

The Jaguares started the second half with a bang - just what Quesada would have ordered from his troops. After building a series of phases, lock Marcos Kremer burst through a gap and dotted down after Diaz Bonilla had made the initial break.

The visitors brought on experienced Pumas Pablo Matera and Agustin Creevy to bolster their pack. Soon after, Ioane made it 29-20 after Tomas Lezana gave away a penalty. On the hour mark, Ioane extended the lead to 32-20 with another penalty goal after Mayco Vivas was guilty of collapsing the ruck right in front of the uprights

The Jaguares responded in the 64th minute. Creevy made a couple of barnstorming runs in midfield to get his side on the front foot. The ball was recycled out to the left and after a couple of neat offloads, Moyano showed too much pace for Smith to dot down in the corner.

Try as they might, the men from Buenos Aires just could not overturn the five-point deficit as it was the home side who came away with the win. 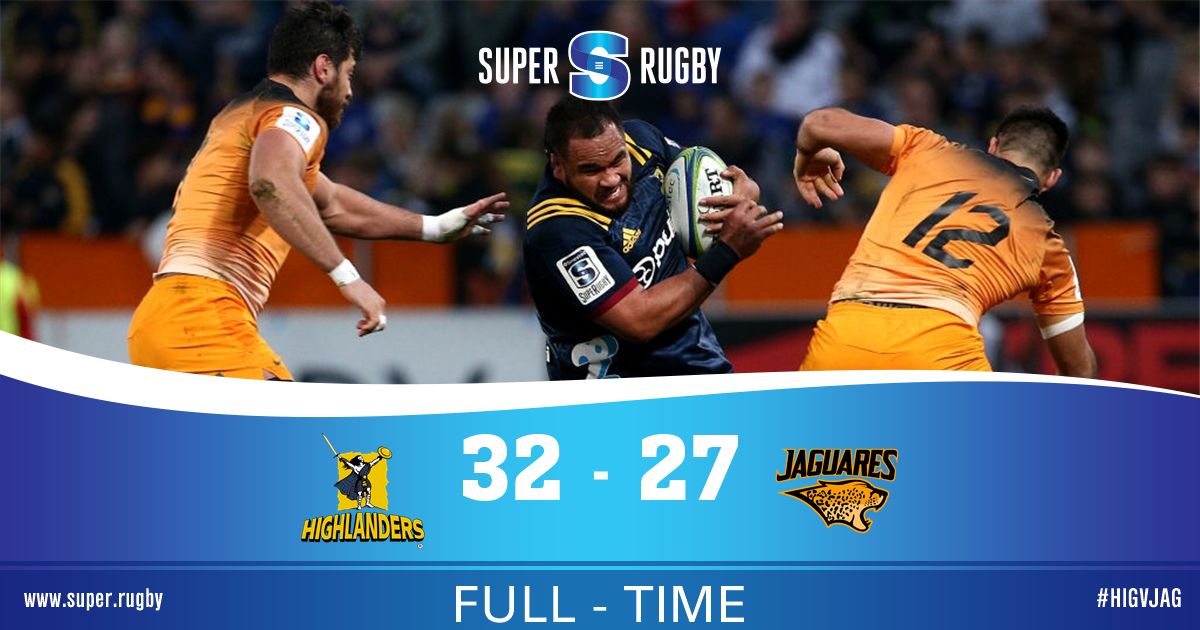