Bulls surprise the Rebels in their own backyard

The Bulls had too much firepower for the Rebels in Melbourne on Friday night, as they ran out deserving 32-17 winners.

The victory lifted the visitors to the top of the South African conference, while the Rebels remain in second in the Australian table.

It was the home side who started on the front foot, controlling virtually all of the possession in the opening minutes, and it soon resulted in their opening score.

An attacking line-out five metres out that did the trick , as the ball was moved out wide where captain and fullback Dane Haylett-Petty managed to offload it in the tackle for winger Marika Koroibete, who crashed over the line to score before Quade Cooper added the extras.

That try appeared to shake the Bulls out of their early slumber, however, and they soon found themselves back on level terms.

Winger Rosko Specman who carried the ball up from a maul before linking up with Warrick Gelant and Cornal Hendricks as they entered the 22. A penalty was awarded and Handre Pollard took it quickly, launching a crossfield kick for Hendricks to collect before crossing over to score.

The Bulls were well and truly awake now, and it took just six minutes for the visitors to bag their second try and take the lead. From a lineout just outside the Rebels 22, the ball was flung out wide where Specman was waiting, running the perfect line to cut open the defence and touch down.

The home side needed to respond and respond they did nine minutes later. It was a failed up and under from the Bulls that put the Rebels on the front foot, and after some good interplay between the backs, scrumhalf Will Genia dived over in the corner to get the hosts back to within two points - as Cooper failed to convert.

There was one more chance for the Bulls to add to their tally before half-time after they were awarded a penalty in a kickable area and Pollard slotted it to make it 17-12 to the visitors heading into the break.

It took just three minutes for the Rebels to tie things up in the second half, a simple shift out wide that ended with Koroibete picking the ball up off the ground and diving over the line for his second try of the evening to make it 17-all.

The match continued to ebb and flow, however, and the Bulls retook the lead shortly before the hour mark thanks to some great work from Specman. The winger collected a bullet pass right on the touch line and kicked a cheeky little chip over the defence before regathering the ball and passing it to Burger Odendaal, who cut inside and dotted down next to the posts.

Pollard added the extras to make it 24-17 with 20 minutes to go, and nine minutes later the Bulls landed a potentially killing blow with their fourth try of the night.

After earning a penalty, opting for an attacking line-out and setting up a maul, it was a long pass from Gelant that found the irrepressible Specman, who ran over unopposed for his second five-pointer.

Pollard missed the conversion, but it made little difference as he slotted a penalty shortly after to put the Bulls a whopping 15 points in front.

And that was how it ended, as the Rebels failed to add to their tally to hand the Bulls a valuable victory on the road. 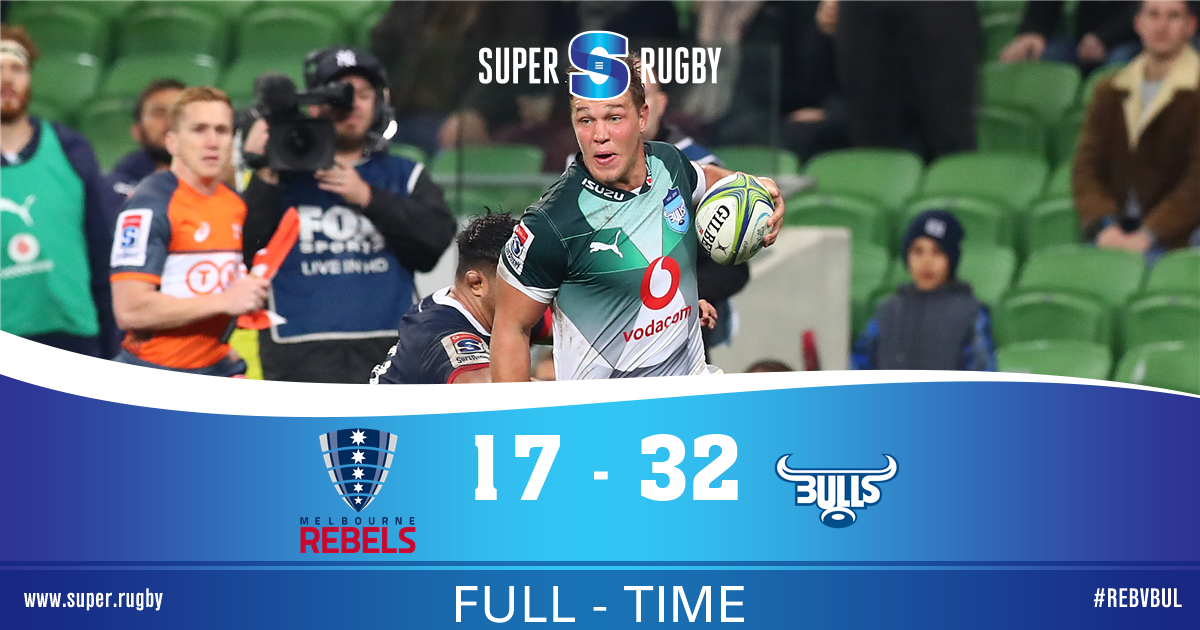