The Blues kept themselves in the Super Rugby play-off hunt after they battled to a 23-8 triumph over the Chiefs at Eden Park.

Leon MacDonald’s charges controlled much of the first half but errors prevented them from building a healthy buffer at the interval. Harry Plummer and Melani Nanai did cross the whitewash for the hosts but they only went into the break with a two-point lead, with Mitch Karpik and Marty McKenzie keeping Colin Cooper’s side in the contest.

After being on the back foot in the opening period, the Chiefs were reprieved by the home side’s profligacy, but they failed to profit in the final 40 minutes and the Aucklanders completed the win through Ofa Tuungafasi and Gerard Cowley-Tuioti tries.

As a result, they moved above Cooper’s charges in the New Zealand Conference, but the hosts will have to improve if they are to reach the top-eight following this scrappy win.

It was a game that was rather symptomatic of both teams. Some excellent play was interspersed with a number of mistakes and it resulted in a competitive, if frustrating, encounter.

The Blues did most of the early running and created several opportunities, but were unable to take advantage and, when the inevitable error was made, the Chiefs countered.

To the visitors’ credit, it was initially well worked as Angus Ta’avao broke through and fed Etene Nanai-Seturo, who kicked ahead. It should have been dealt with by star wing Rieko Ioane but his attempted off-load on his own line was caught and finished by opposition flanker Karpik.

Ioane perhaps should have taken lessons on how to deal with such situations from younger team-mate Caleb Clarke. The 20-year-old did brilliantly to halt a Chiefs breakaway when Anton Lienert-Brown and Shaun Stevenson combined, and that effort helped the Aucklanders get back into the contest.

Following Clarke’s defensive excellence, another youngster showed his nous and potential when Plummer produced a nice outside line to touch down and level matters.

Although the Waikato-based outfit hit back immediately via McKenzie’s penalty, the Blues had the momentum and crossed the whitewash for a half-time lead. Another turnover gave them a chance in the opposition half and MacDonald’s men benefited, going through the phases, before Nanai stepped his way across the whitewash.

The second period continued in the same vein as the first with the Blues dominating possession and territory. They also had positive contributions from Ioane, who produced a couple of neat touches to get them on the front foot, and it resulted in Plummer kicking a three-pointer.

That score was thoroughly deserved and it was then followed by the game-clinching effort when Tuungafasi went over from close range.

It was controversial as the prop appeared to lose control of the ball in the act of touching down and those frustrations increased for the Chiefs as Pita Sowakula and Sam Cane, who was making a welcome return to action after a horrific neck injury, were denied tries.

With those decisions, the match was finished, but the Blues still had the bonus-point to play for and they duly secured it when Cowley-Tuioti barged across the line. 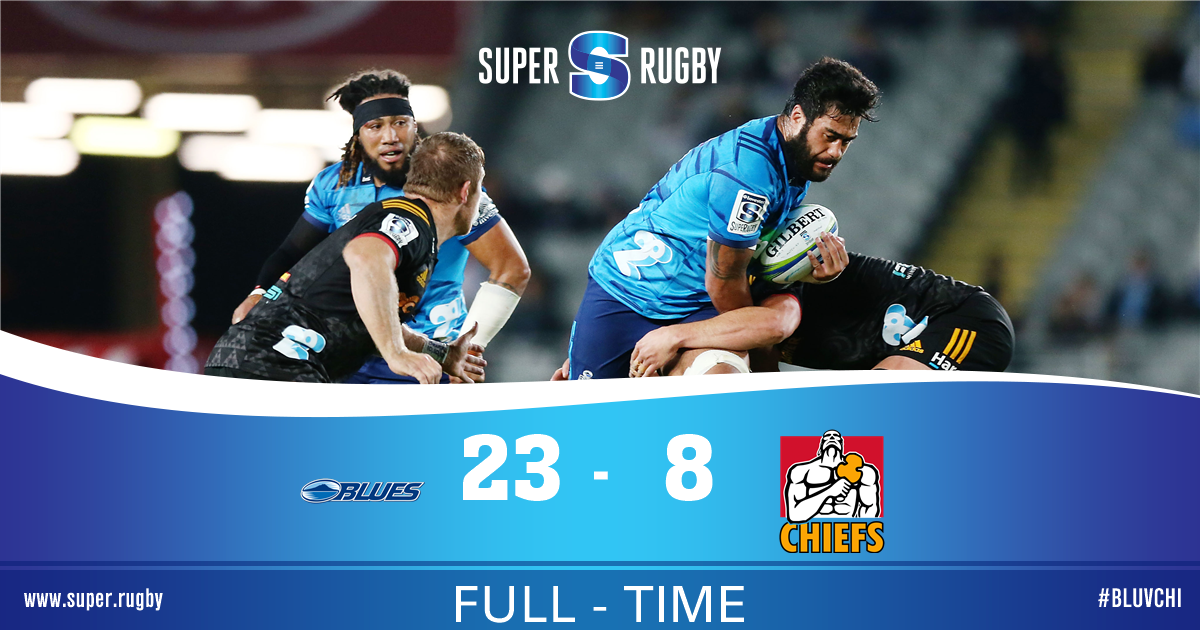