The Brumbies have taken the top spot in the Australian conference after a strong 35-24 win over the Waratahs in Parramatta, Sydney.

In what could be the final home match for multiple Waratahs, a win was needed against a much-improved Brumbies side to have any hope of making the finals.

It was a mistake ridden opening few minutes, but the Waratahs found themselves deep in their attacking 22 and after strong early defence from the Brumbies eventually they were caught offside giving the Waratahs the opening points from the boot of Bernard Foley 3-0.

The Brumbies found some confidence working their way down field and after sending the forwards to work, the long arms of Rory Arnold reached across the line to give the Brumbies the lead 7-3 after 15 minutes played.

Dan Mckellar’s side again found themselves on the charge after a well worked set play. Andrew Muirhead went himself on the right edge and with the driving help of his teammates the Brumbies were in again.

Christian Lealifiano added the extras, as the Brumbies took a 14-3 lead after 20 minutes.

A great cut out pass from Irae Simone, set Toni Pulu off downfield and after strong inside support the Brumbies third try came with Simone finishing off under the posts. Lealifano kept his 100% accuracy off the boot and the Brumbies had a strong lead 21-3 after 25 minutes.

It started to rain tries at Bankwest Stadium, with a lineout close in the Brumbies turned too their rolling mall, crossing yet again thanks to Folau Faingaa with his eleventh try of the season.

Christian Lealifiano put the ball over the black dot and extended the score line 28-3 after 32 minutes.

Finally, the Waratahs had some attacking position, but it summed up their night with backrower Lachlan Swinton, dropping the ball over the line much to the disappointment of the crowd.

The Waratahs came out strong after the break and were gifted a lineout less than 10 metres from their line. With forward pressure the Tahs were only a metre out and Nick Phipps threw the dummy to dive over for his side. Foley helped close the gap on the Brumbies lead converting the try score 28-10 after 48 minutes.

Again, deep into their attacking 22 the Waratahs looked to add further confidence, but a resilient Brumbies were able to hold out for close to 5 minutes. Eventually, Jed Holloway crossed for the home side but again the ball slipped out for a knock on.

The Waratahs attempted to apply pressure in the midfield but were struggling to make any ground, a chip kick from Bernard Foley saw Adam Ashley Cooper swoop through to gather and score, the Tahs were back in it.

Foley added the extras and the gap was reduced on the Brumbies lead 28-17, with 10 minutes remaining.

The Brumbies rallied and off the back of a strong attacking scrum, Back Rower Tom Cusack crossed to all but seal the match for his side, Christian Lealifiano converted with the score 35-17.

Although the Waratahs would have the final say with Curtis Rona crossing in the corner, but it was all but too late. The final score 35-24, the Brumbies take out the Australian conference with the win. 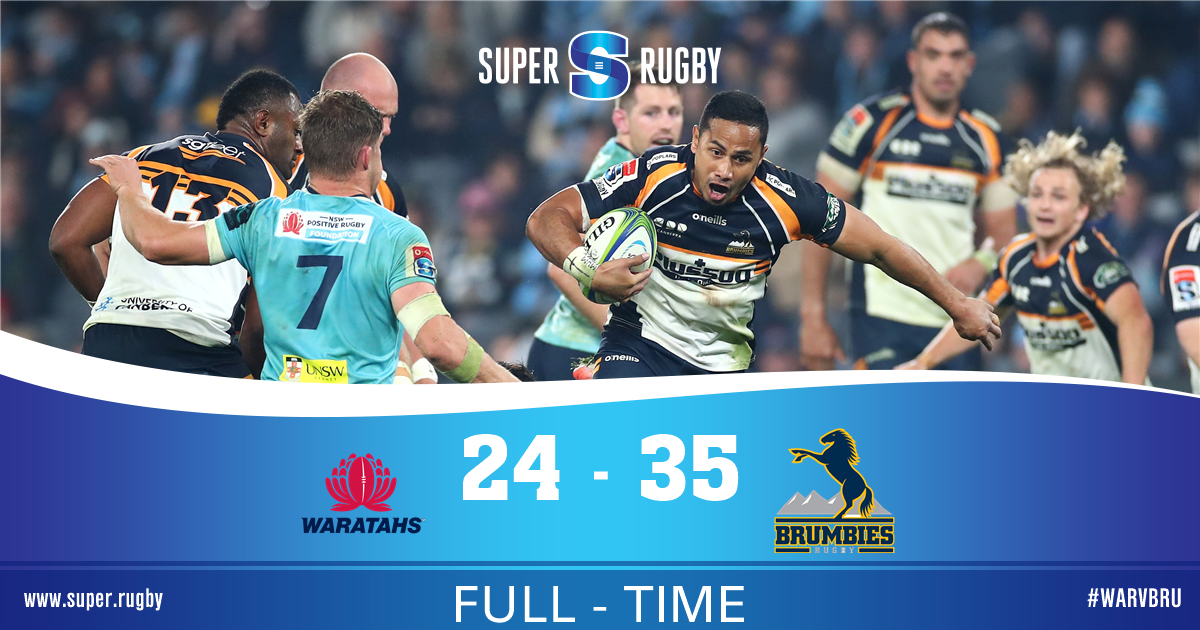