The Brumbies secured their first Super Rugby semi-final berth since 2015 with an emphatic 38-13 triumph over the Sharks in Canberra.

The home side were full value for their win, outscoring their opponents by five tries to one, with Pete Samu leading the way with a deserved brace and Henry Speight, Joe Powell and Matt Lucas also crossing the whitewash. Their other points came via five conversions and a penalty from captain Christian Lealiifano.

The Sharks were never really in the game, but Andre Esterhuizen did manage to score a try while Curwin Bosch slotted two penalties and a conversion.

The Brumbies made a sensational start when Samu gathered an inside pass from Rory Arnold on the Sharks’ 10-metre line before racing away to score the opening try after just 54 seconds.

The Sharks responded with a 50-metre penalty from Bosch in the ninth minute but it wasn’t long before the home side replied with a well-taken try from Speight.

This after Tom Banks made an excellent break in the build-up before offloading to Rory Arnold, who did well to get a pass out to Speight to go over in the right-hand corner.

Lealiifano converted both tries before trading penalties with Bosch which gave the Brumbies a 17-6 lead midway through the half.

There was more joy for the home side in the 24th minute when Samu crossed for his second try off the back of a lineout drive deep inside the Sharks’ 22.

The Brumbies held a 24-6 lead at the interval, but the visitors would enjoy their best spell early in the second half as they briefly threatened to turn the game into a contest.

Their efforts were rewarded in the 56th minute when Esterhuizen showed great determination to shrug off three defenders before barging over for his side's first try.

Bosch converted but that would be the last time the Durban-based outfit would score points as the Brumbies dominated the rest of the match.

They struck back in the 72nd minute when Powell beat Juan Schoeman with a cheeky dummy on his way over the try-line, and just before the end Lucas crossed for their fifth try following a brilliant break from Banks to seal a fine victory and set up a semi-final date with the Jaguares in Argentina next weekend. 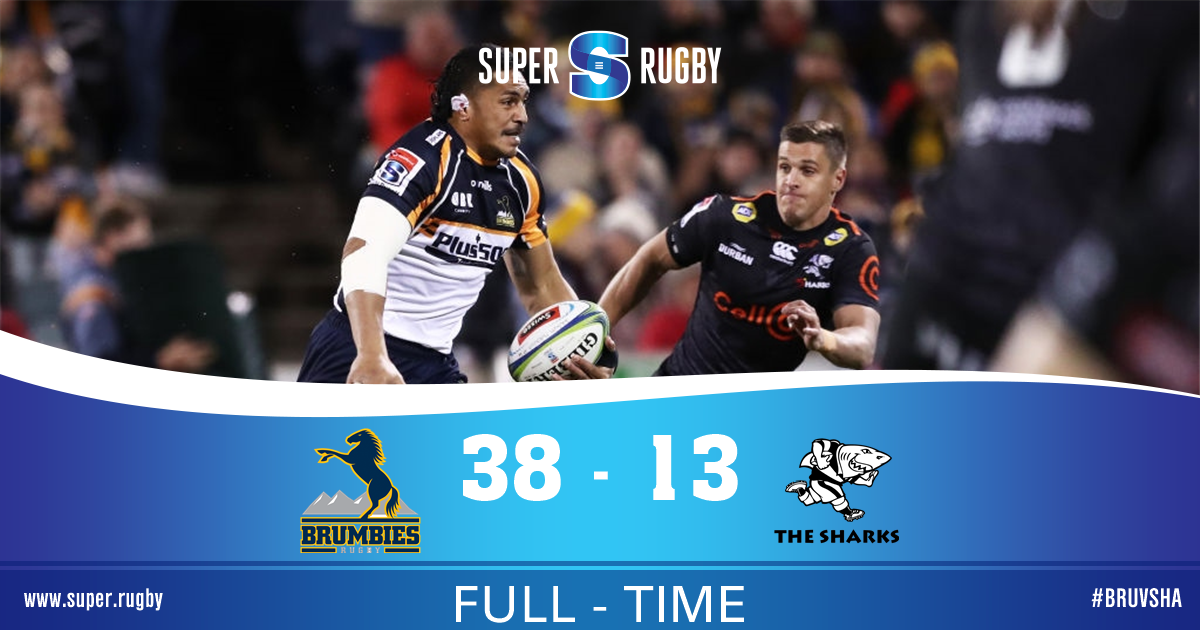