Crusaders Beat Hurricanes In Thriller To Advance To Final

The Crusaders will vie for a third straight Super Rugby title after knocking out the Hurricanes with a 30-26 win in Christchurch.

As the scoreline suggests, this was a tightly-fought encounter with both sides going at each other hammer and tongs for the full 80 minutes and the result hanging in the balance until the very end.

The Crusaders were made to work hard for this win, especially in the second half when the Hurricanes delivered a brilliant attacking display, eventually outscoring the champions by four tries to three.

Excellent goalkicking from Richie Mo’unga proved the difference between the sides in the end as he contributed 20 points in his side’s win courtesy of three penalties, three conversions and a try, while Sevu Reece crossed for a brace.

For the Hurricanes, Ngani Laumape scored two tries while their other points came via tries from Ben Lam and TJ Perenara, and three conversions from Beauden Barrett.

The home side drew first blood via a Mo’unga penalty after just three minutes and they continued to hold the upper-hand during the rest of the half thanks to enjoying the bulk of the territory and possession.

Ten minutes later, Mo’unga showed his class when he launched a well-weighted crossfield kick which Reece gathered off his bootlaces before diving over in the right-hand corner.

Mo’unga added the extras to give the Crusaders a 10-0 lead inside the opening quarter.

They continued to dominate over the next 20 minutes but had little to show for their efforts with another penalty from Mo’unga in the 34th minute the only points scored during that period.

The Hurricanes needed a response and that came on the stroke of half-time when Laumape shrugged off a couple of defenders on his way over the try-line.

Barrett’s conversion meant the visitors were back in this match with the Crusaders holding a 13-7 lead at the interval.

The Hurricanes started the second half in similar fashion to how they finished the first and shortly after the restart Ben Lam stunned the home crowd when he rounded off in the left-hand corner. This after a superb line break from Matt Proctor and an excellent final pass from TJ Perenara in the build-up.

Barrett failed with his conversion attempt and that proved costly as the Crusaders struck back shortly afterwards when Mo’unga crossed the whitewash. James Marshall, who had just come on as a replacement, failed to deal with a teasing kick from Mo’unga just outside the Hurricanes’ 22 and Reece pounced on the loose ball before offloading to Mo’unga, who had an easy run-in under the posts.

Mo’unga dusted himself off before slotting the conversion to give his team a 20-12 lead but the Hurricanes did not surrender and continued to launch attacks inside the Crusaders’ half.

In the 51st minute, Jack Goodhue lost the ball in contact and Laumape booted the ball ahead before gathering and crossing the whitewash. There were concerns that he had knocked on in the build-up but television replays revealed that the ball had come off his chest and not his hands which meant the try stood.

Barrett’s successful conversion meant the Crusaders were now holding only a slender 20-19 lead.

The home side struck back when Kieran Read, Matt Todd and Jordan Taufua combined brilliantly to create space for Reece, who beat Beauden Barrett with deft footwork before crossing in the right-hand corner again.

Mo’unga’s conversion gave the champions more breathing space but the Hurricanes had more left in the tank and on the hour-mark Perenara sold three defenders a dummy deep inside opposition territory before diving over from close range.

That set the stage for a frantic finish, with the visitors upping the ante in a bid to steal the win, but the Crusaders held on and secured victory when Mo’unga landed his third penalty late in the game as they booked their spot in yet another Super Rugby final. 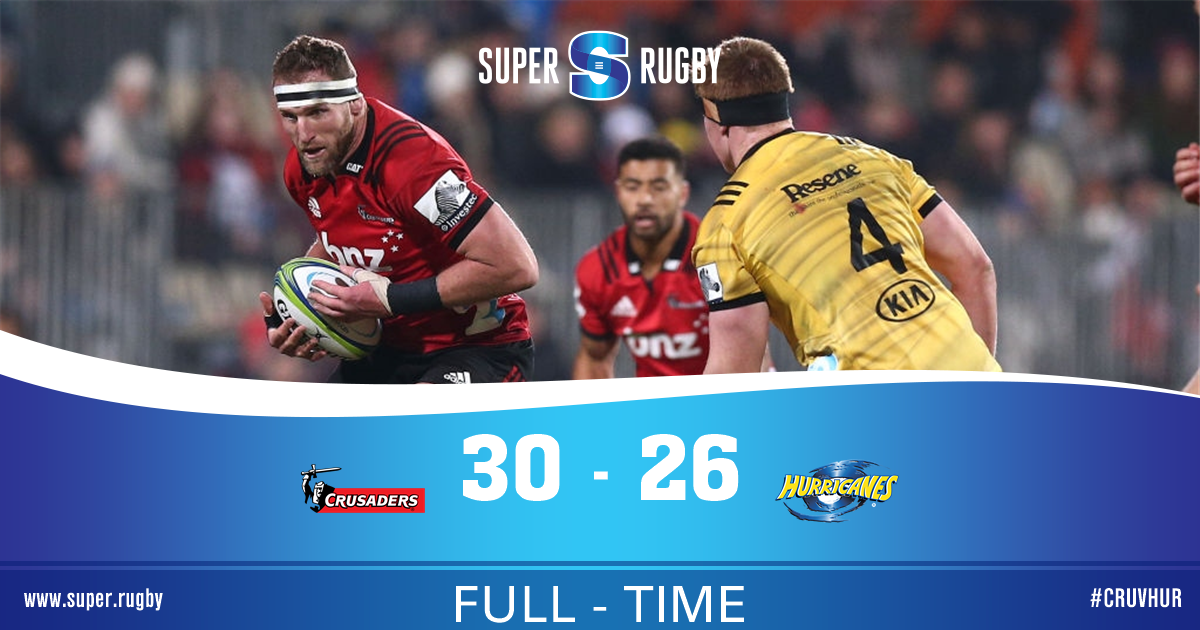