The Rebels put on a superb performance to defeat the Brumbies 30-12 in their Super Rugby AU clash in Sydney on Friday.

The match was played in atrocious weather conditions with heavy rain restricting play mostly to the forwards – especially in the first half – but when the ball was played to the backs, however, the Rebels had the better of the exchanges and delivered an outstanding all-round performance.

The Rebels eventually outscored their opponents four tries to two with Reece Hodge leading the way with a brace and their other points came courtesy of tries from Brad Wilkin and Jordan Uelese while Matt Toomua succeeded with two conversions and a couple of penalties.

For the Brumbies, Joe Powell and Will Miller crossed for tries and Bayley Kuenzle slotted a conversion. The result is a momentous one as it is the Brumbies’ first defeat in the competition and the Rebels have now secured their third successive win after also beating the Waratahs and Western Force in their previous games.

The Rebels were in a dominant mood and opened the scoring as early as the third minute when Hodge crossed for the opening try after the ball went through nine phases in the build-up.

Toomua failed with the conversion attempt but in the 16th minute Wilkin scored their second five-pointer after excellent work from Marika Koroibete. The Wallabies flyer pounced on a loose ball in the Brumbies’ 22 and booted it upfield a couple of times before regathering close to his opponents’ try-line. Although his progress was halted by Andy Muirhead, Koroibete did well to offload to the on-rushing Wilkin, who barged over the whitewash.

Two minutes later, Powell opened the Brumbies’ account when he collected the ball from Folau Fainga’a at the back of a lineout drive deep inside Rebels territory and he had an easy run-in over the try-line.

That was as good as it got for the visitors during the opening half as the Rebels stepped up a few gears on attack and were rewarded with two further tries before half-time.

In the 23rd minute, the Rebels took the ball through several phases inside the Brumbies’ half before Toomua stabbed through a grubber kick and Hodge beat Tom Banks in a foot race before diving on the ball behind the Bumbies try-line.

15 minutes later, the Rebels increased their lead when Uelese crossed for their fourth try, from close quarters, after Isi Naisarani was stopped just short in the build-up.

Shortly afterwards, things went from bad to worse for the Brumbies when Tom Cusack was yellow carded for a professional foul deep inside his 22 and the teams changed sides at half-time with the Rebels holding a comfortable 27-7 lead.

The second half was less frantic although there was big improvement from the Brumbies in most facets of play. They continued to make defensive errors, however, and in the 53rd minute the Rebels consolidated their lead wen Toomua added his second penalty.

The rest of the half was evenly contested although both sides struggled to score points during that period. Just before full-time, the Brumbies were rewarded when Miller crossed for their second try which proved too little too late, although it did add some respectability to the final score. 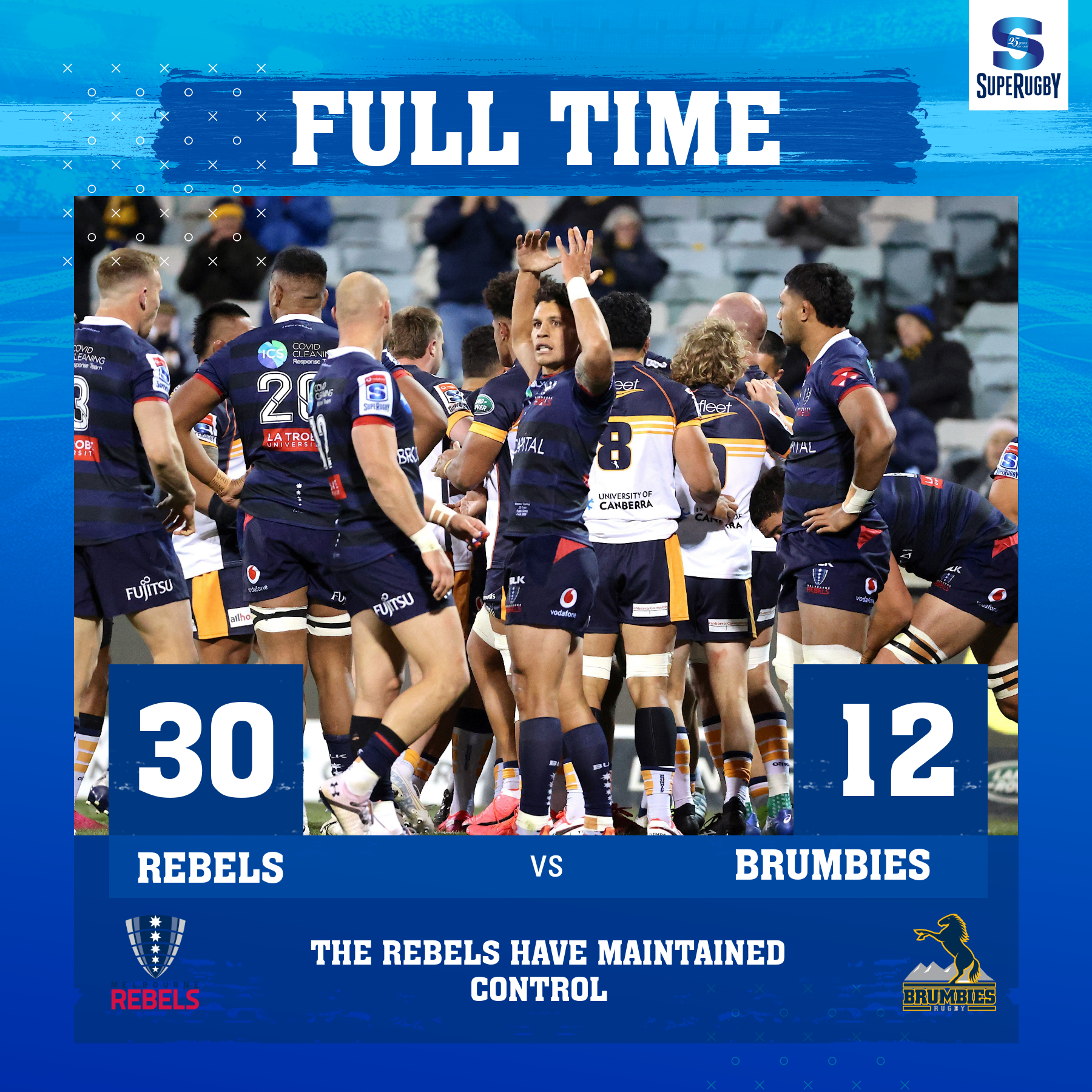