Dominant performance by the Reds seals win over the Force

James O'Connor scored 22 points as the Reds inflicted a humiliating 57-5 defeat on the luckless Force in Queensland.

The Brisbane-based outfit were full value for their bonus-point win after outscoring the Force eight tries to one in a totally one-sided contest.

The result means the Reds provisionally move to the top of the Super Rugby AU standings, although that could change if the Brumbies beat the Waratahs in Canberra on Saturday.

O’Connor's 22-point haul came courtesy of a try, seven conversions and a penalty, while their other points came via tries from Filipo Daugunu (2), Tate McDermott (2), Fraser McReight, Bryce Hegarty and Tuaina Tualima.

Andrew Ready scored the Force’s only points when he crossed for a try early in the second half.

Considering the final result, the opening exchanges were surprisingly evenly contested, with both sides spending time in their opponents’ half, although the Reds took control of proceedings as the half progressed.

In the 15th minute, Taniela Tupou dotted down from close quarters after running onto a pass from Brandon Paenga-Amosa but his try was disallowed after television replays revealed a handling error from Liam Wright in the build-up.

That did not deter the visitors and shortly afterwards Daugunu gathered an inside pass from O’Connor inside the Force’s 22 and did well to step past a couple of defenders before scoring the opening try.

That score boosted the Reds’ confidence levels as they held the upper hand during the rest of the half, controlling the bulk of the possession and spending long periods camped inside the Force’s half.

On the half-hour mark, they increased their lead when Hegarty and O’Connor combined brilliantly to create space for Daugunu out wide to cross over.

The Reds continued to dominate during the closing stages of the half and in the 38th minute, O’Connor slotted a penalty which gave them a 15-0 lead at half-time.

The Force needed a response and that came shortly after the restart when Ready scored their only try of the match off the back of a lineout drive deep inside the Reds’ 22.

But there was to be no comeback for the Force, particularly after Kieran Longbottom was yellow-carded, reducing them to 14 men just as it seemed they might make a game of it.

The Reds kept their cool and in the 55th minute, McReight crossed the whitewash after gathering a brilliant offload from O’Connor close to the Force’s try-line.

The next 10 minutes was the McDermott show as the diminutive scrum-half scored two tries in quick succession. His second five-pointer was a thing of beauty as he took a tap penalty midway between the Force’s 10-metre line and the halfway mark and set off on a mazy run in which he beat four defenders before scoring a deserved try.

With the game in the bag for the Reds, their opponents seemed to raise the white flag. A procession of tries followed from O’Connor, Hegarty and Tualima during the game’s closing stages before the final whistle finally brought the Force some measure of relief. 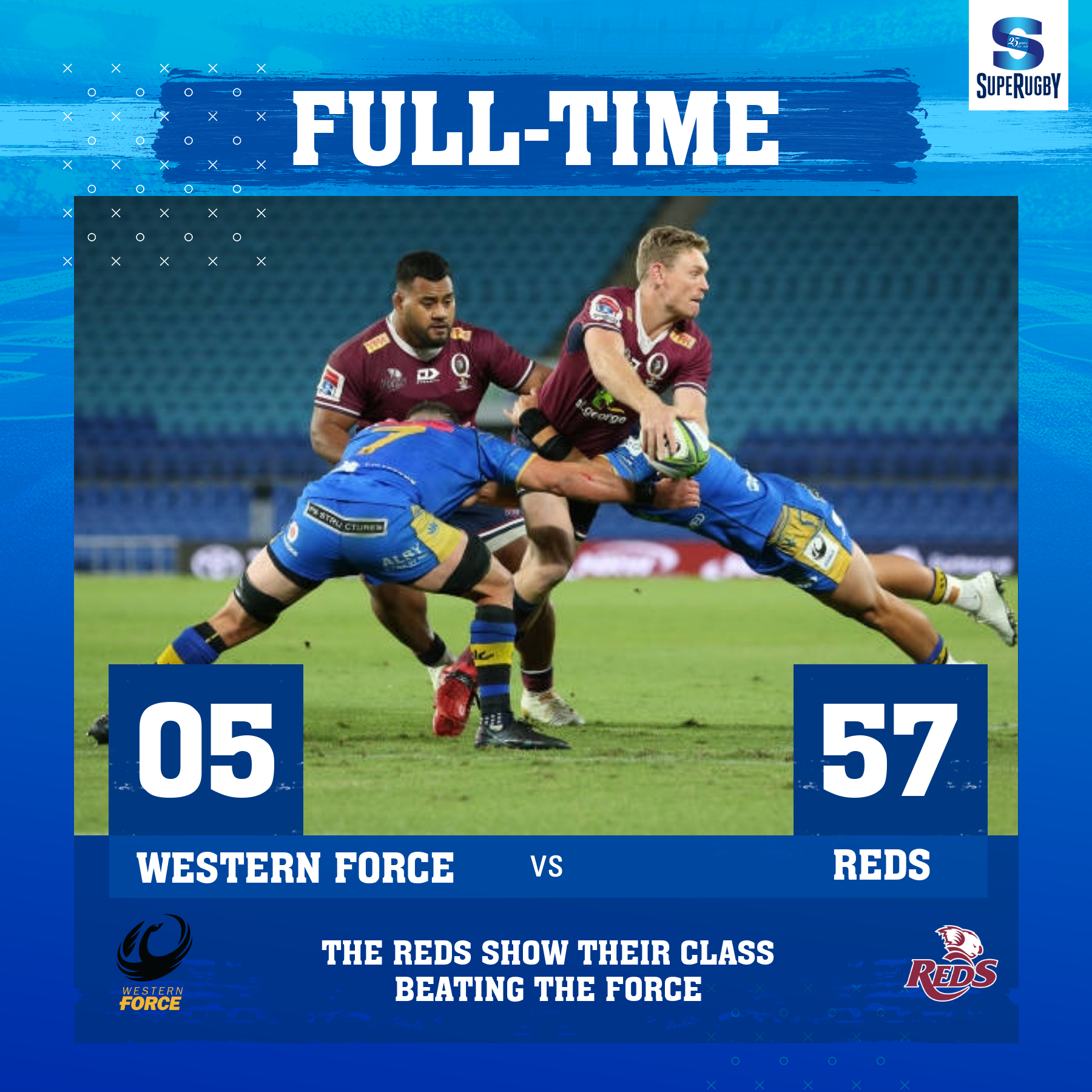