Reds to take on the Brumbies in Super Rugby final

The Reds will face the Brumbies in the final of Super Rugby AU after producing an excellent display to defeat the Rebels 25-13 at Suncorp Stadium on Saturday.

In a tightly contested encounter, it was the Queensland outfit that got on the board first via Jordan Petaia. James O’Connor kicked the conversion and also added a penalty, but they were pegged back just before the half-time break through Marika Koroibete’s try and Matt Toomua’s three-pointer.

Brad Thorn’s charges then opened the second period the brighter, going over for the second time via Lukhan Salakaia-Loto, before O’Connor and Toomuna traded penalties.

The match was still finely poised going into the final quarter, with O’Connor and Reece Hodge successful off the tee, but the hosts remained composed and made sure of their place in the showpiece event when Filipo Daugunu crossed the whitewash.

The Reds had the ideal preparation with an impressive victory over leaders the Brumbies last week, but they were put under pressure early on by their opponents.

Dave Wessels’ men had squeaked through to this elimination match thanks to a last-minute try against the Western Force, but they showed an improvement in the initial stages in Brisbane.

Dane Haylett-Petty initially threatened while ever-dangerous wing Koroibete was always a menace, and the Rebels were on the front foot in the opening 10 minutes.

They were stretching the hosts’ defence but then proceeded to hand the Queenslanders an absolute gift. Credit must go to Petaia, who once again impressed and read the play superbly, but Toomua will rue the pass which sent the Australian international centre scampering over the whitewash.

Although the fly-half partially atoned for that error with a penalty earned by a powerful scrum, O’Connor restored the Reds’ seven-point buffer with a successful effort off the tee.

The home side’s pivot then had an opportunity to extend that lead but his three-point attempt was awry and the Rebels benefited from that profligacy late in the half. Wessels’ charges went through the phases and Koroibete spotted a gap through the heart of the opposition rearguard to touch down and level matters at the interval.

Half-time came at an ideal moment for the Reds, who composed themselves and hit back early in the second period. Replacement Hunter Paisami was the instigator, scything through and finding Daugunu out wide. The wing, with the covering defence charging back, stepped back inside and Salakaia-Loto was on hand to surge on to the ball and finish.

The Melbourne outfit then suffered a further blow as Toomua followed Haylett-Petty – who was replaced just after the break – off the field due to injury, but Hodge managed to reduce the arrears from the tee.

However, they lacked the same potency without that Wallaby duo and O’Connor kept the Rebels at arm’s length before the Reds secured their place in the final thanks to Daugunu’s late effort.

A lovely inside ball from Bryce Hegarty puts the rampaging Taniela Tupou in the gap, and rather than try and bash his way through, he cleverly looked for support, finding Daugunu out wide who went over for the try in the corner. 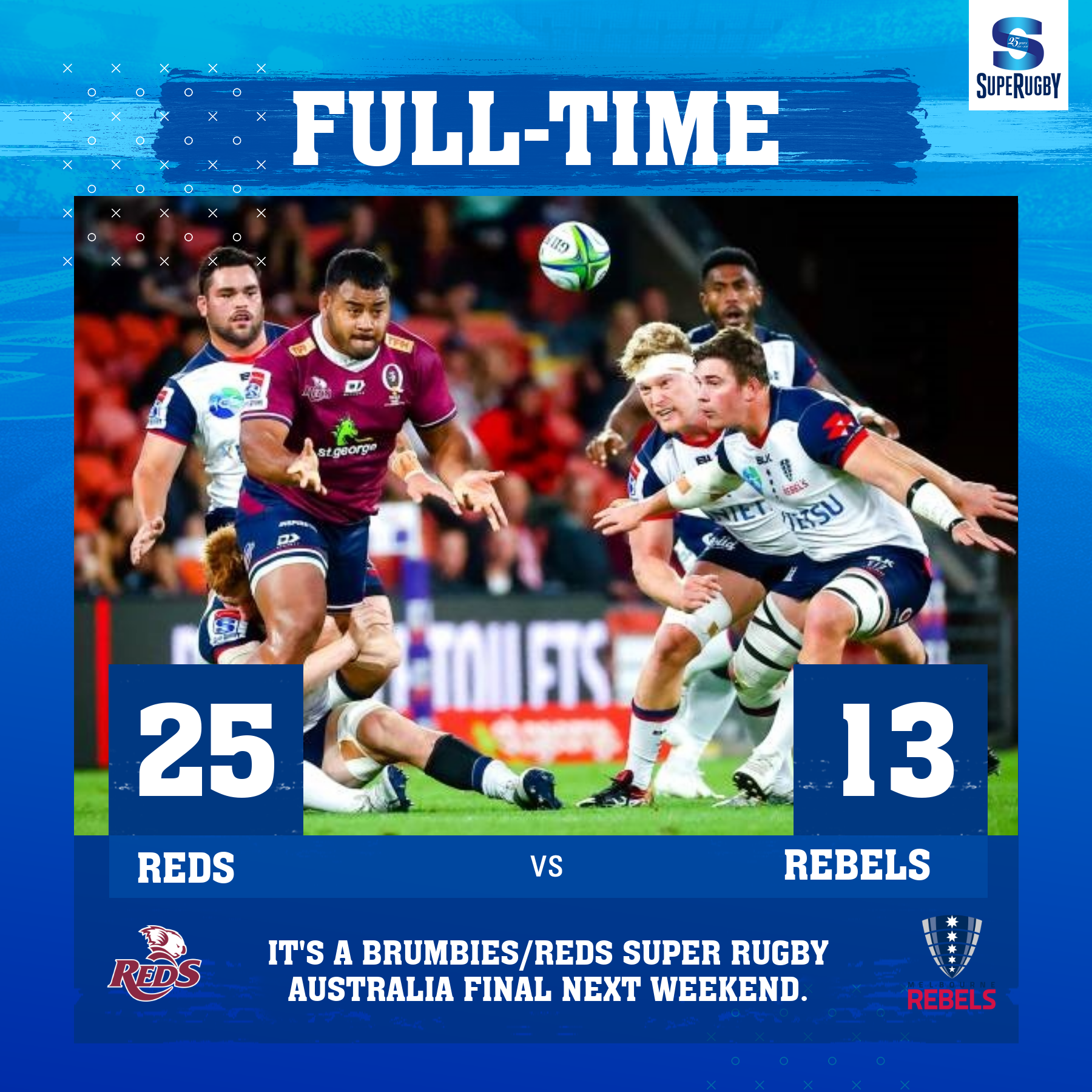