The Brumbies had to hold on until the very end before securing a 28-23 victory over the Reds as Super Rugby AU came to a thrilling conclusion in Canberra.

In a fast-paced and action-packed encounter, the Brumbies held the upper hand for most of the match, although they were severely tested during the closing stages when the valiant Reds, still within touching distance, launched several do-or-die attacks.

The Reds will be left wondering what might have been, as they were frequently their own worst enemies, committing too many unforced errors which eventually cost them the game.

In the end, the Brumbies outscored them three tries to two with Folau Fainga’a, Andy Muirhead and Tom Banks crossing the whitewash for the home side and Noah Lolesio contributed 13 points courtesy of two penalties, a drop goal and a couple of conversions.

The opening exchanges were evenly contested, leaving the sides deadlocked at 3-3 on 15 minutes after Lolesio and O’Connor traded early penalties. The Brumbies gained the initiative moments later, however, when Fainga’a crossed for the opening try in trademark fashion off the back of a lineout drive deep inside Reds territory.

The home side continued to dominate over the next 10 minutes and were rewarded in the 26th minute when Muirhead went over for their second five-pointer. Tevita Kuridrani laid the groundwork with a strong carry before Lolesio put Muirhead in the clear with a deft offload and the wing did well to power through three tackles before dotting down.

The Reds needed a response and that came on the half-hour mark courtesy of a moment of magic from Jordan Petaia. The 20-year-old set off on a mazy run after gathering the ball on his 10-metre line and flummoxed the Brumbies defence with deft footwork before delivering a backhanded pass to Wilson, who had an easy run-in over the try-line.

That score proved to be a shot in the arm for the visitors, who had the better of the half’s closing stages and on the stroke of half-time O’Connor slotted his second penalty as the Brumbies held on for a slender 15-13 lead at the interval.

The Brumbies made an excellent start to the second half when, five minutes after the restart, Banks ran onto a pass from Irae Simone inside the Reds’ 22. The Wallaby full-back did well to step past a couple of defenders before crossing the whitewash.

Momentum was now with the home side and shortly afterwards they extended their lead when Lolesio landed a surprise drop-goal from 35 metres out. The Reds suffered a further setback when, from the restart, Filipo Daugunu was yellow carded for a tip-tackle on Lachlan McCaffrey.

The Reds conceded another penalty in the 55th minute Lolesio succeeded with his second three-pointer off the kicking tee to give his side a now commanding 28-13 lead.

But the Reds refused to give up the fight and responded with another penalty from O’Connor before Blyth scored a vital try under the posts from close quarters in the 64th minute, following a brilliant run from Tate McDermott in the build-up.

That set up a tense finish to the match and the competition as a whole, with the Reds fighting for their life and launching several attacks on their opponent's try-line, even foregoing a chance at three points right in front to set up an attacking line-out in search of a winning try.

But the Brumbies defence stood firm, as they held on to be crowned deserved champions after also topping the table in the league phase of the competition. 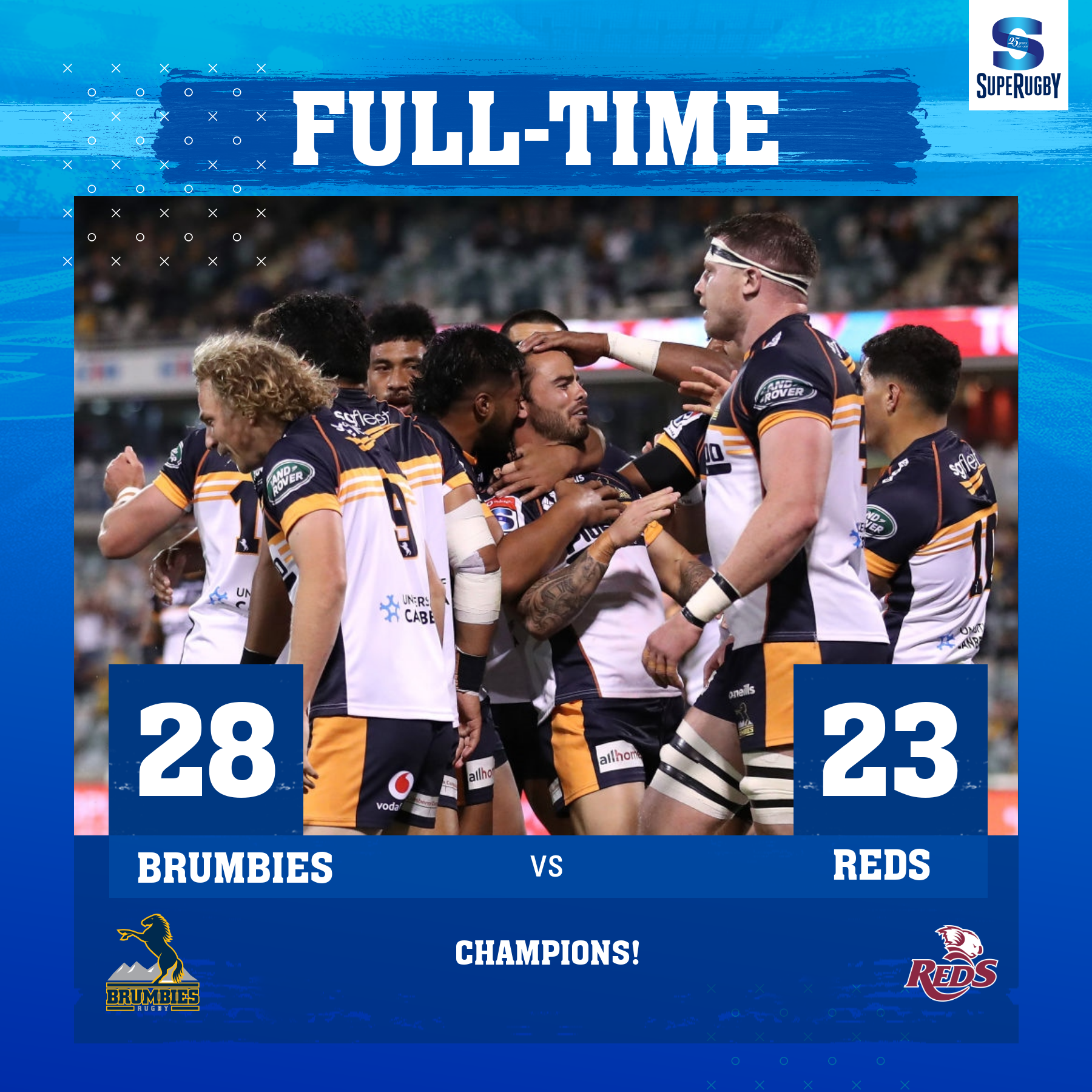