A penalty in injury time from flyhalf Curwin Bosch gave the Sharks a narrow 34-33 victory over a valiant Griquas outfit at Griqua Park in Kimberley on Friday.

The victory means the Sharks stay in the hunt for the Super Rugby Unlocked trophy as the win moves them up to 17 points on the table, just two behind the Bulls who sit on top of the log.

Griquas started the match on the front foot and took an early lead when flyhalf Tinus de Beer converted a penalty in the sixth minute.

The hosts were all over the visitors but, against the run of play, in the 12th minute the Sharks scored the first try of the game through scrumhalf Sanele Nohamba.

The home team was doing all the attacking and went inside the Sharks 22 but Thembelani Bholi did brilliantly to rip the ball in the tackle.

The flanker then raced clear and fed centre Marius Louw, who ran a great run and then released Nohamba to score under the poles.

Griquas though never lost belief and were not playing like a team that has so far lost all their games this season and sit at the foot of the table.

The hosts were forcing mistakes and De Beer converted two more penalties to give his team a 9-7 lead going into the halftime interval.

Griquas continued to dominate proceedings after the restart and were rewarded with their first five-pointer of the match when wing Ederies Arendse went over.

The hosts were not done yet as left-wing Eduan Keyter scored in the 54th minute beating some soft Sharks defence to dive over in the corner.

De Beer converted both tries as Griquas were leading 23-10 at that stage.

The visitors hit back as replacement back as Manie Libbok ran a great angle as the Sharks took advantage after a scrum five meters from the Griquas tryline.

The home team though went 30-17 ahead when Gideon van der Merwe went over the whitewash after some neat build-up play that started when they stole a Sharks lineout on the halfway line.

De Beer kept up his perfect night from the kicking tee with the hosts taking a 13-point lead with less than 20 minutes remaining.

The Sharks though scored two tries in quick succession, first captain Jeremy Ward crashed over after a long and patient build-up play and then replacement forward Dylan Richardson scored almost immediately from the kickoff.

It was a great team move that saw almost the whole side involved in the build-up and then Phepsi Buthelezi broke the line before feeding Richardson.

Bosch converted to give the visitors 31-30 lead with 10 minutes of the match remaining.

Griques thought they had won the game when De Beer converted a penalty on the stroke of the full-time hooter.

However, the Sharks had other ideas as Sibusiso Nkosi did brilliantly to claim the restart with the visitors then holding onto possession and force a penalty that saw Bosch seal victory. 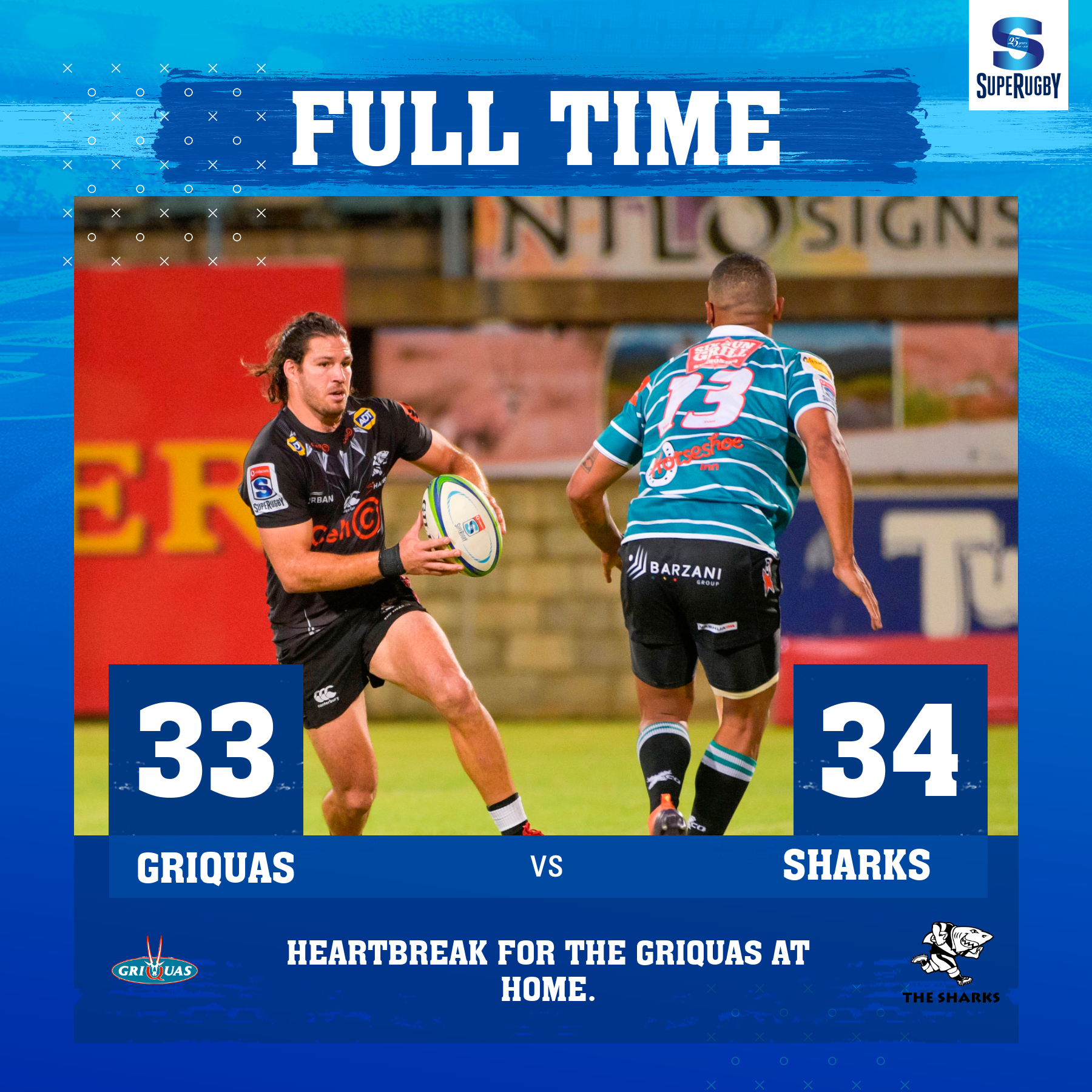