The Crusaders extended their lead at the top of the Super Rugby Aotearoa standings with a 39-17 rout of the Chiefs at ANZ Stadium on Saturday.

The hosts scored five tries; through Leicester Fainga'anuku, a Penalty Try, Will Jordan, Whetu Douglas and Mitchell Dunshea, as Damian McKenzie and Etene Nanai-Seturo got on the try column for the Chiefs.

McKenzie opened the scoring with a sensational run. The Chiefs went through the phases using the quick ball, keeping the Crusaders on their heels. Brad Weber sent the ball wide where Sean Wainui fed McKenzie, who joined the line with a sublime angled run. The fullback slipped Fainga’anuku’s weak tackle, ran through Mo’unga, and barged his way over the try-line.

The Crusaders responded in the 16th minute with their first try. Fainga’anuku, under pressure from McKenzie, produced a magnificent finish in the corner after David Havili’s midfield break. Havili handed off Nanai-Seturo and raced away from the cover defence before an inch-perfect, floated skip-pass found the winger. The 21-year-old turned on the gas and dived for the corner flag and managed to dot the ball down while keeping his left foot in the air.

The momentum of the game had swung the 'Saders way and Mo'unga cut the deficit to two in the 27th minute with a penalty after the Chiefs strayed offside. And four minutes later, the All Blacks fly-half edged the hosts in front with another three-pointer.

The penalties were mounting against the visitors. However, they did have a chance to restore their lead just before half-time after winning a penalty in a very kickable position but McKenzie missed a crucial kick.

Weber was sent to the sin-bin four minutes after the break for deliberately knocking down Mo’unga’s pass, but replays showed the Chiefs scrum-half never touched the ball. However, it resulted in a penalty try for an 18-10 lead.

The Chiefs' indiscipline was really costing them. And the Crusaders were in their usual ruthless mood. With nothing really on in the 55th minute, Mo'unga played a superb no-look pass on his inside for Jordan to run onto at pace and scythe through the Chiefs defence and go in under the poles.

Soon after, Douglas sold a dummy and barged over the chalk for the bonus-point score. It was a sublime attack, especially the handling by the home team’s forwards, who offloaded like backs to set up the try.

Another massive scrum won the 'Saders yet another penalty. Scott Barrett pointed to the corner and from there the lineout was set up with Dunshea walking over at the bakc of the driving maul.

The away side would pull one back through the impressive Nanai-Seturo as they slumped to their fifth successive Super Rugby away defeat, their longest losing run on the road since 2010 and 2011. 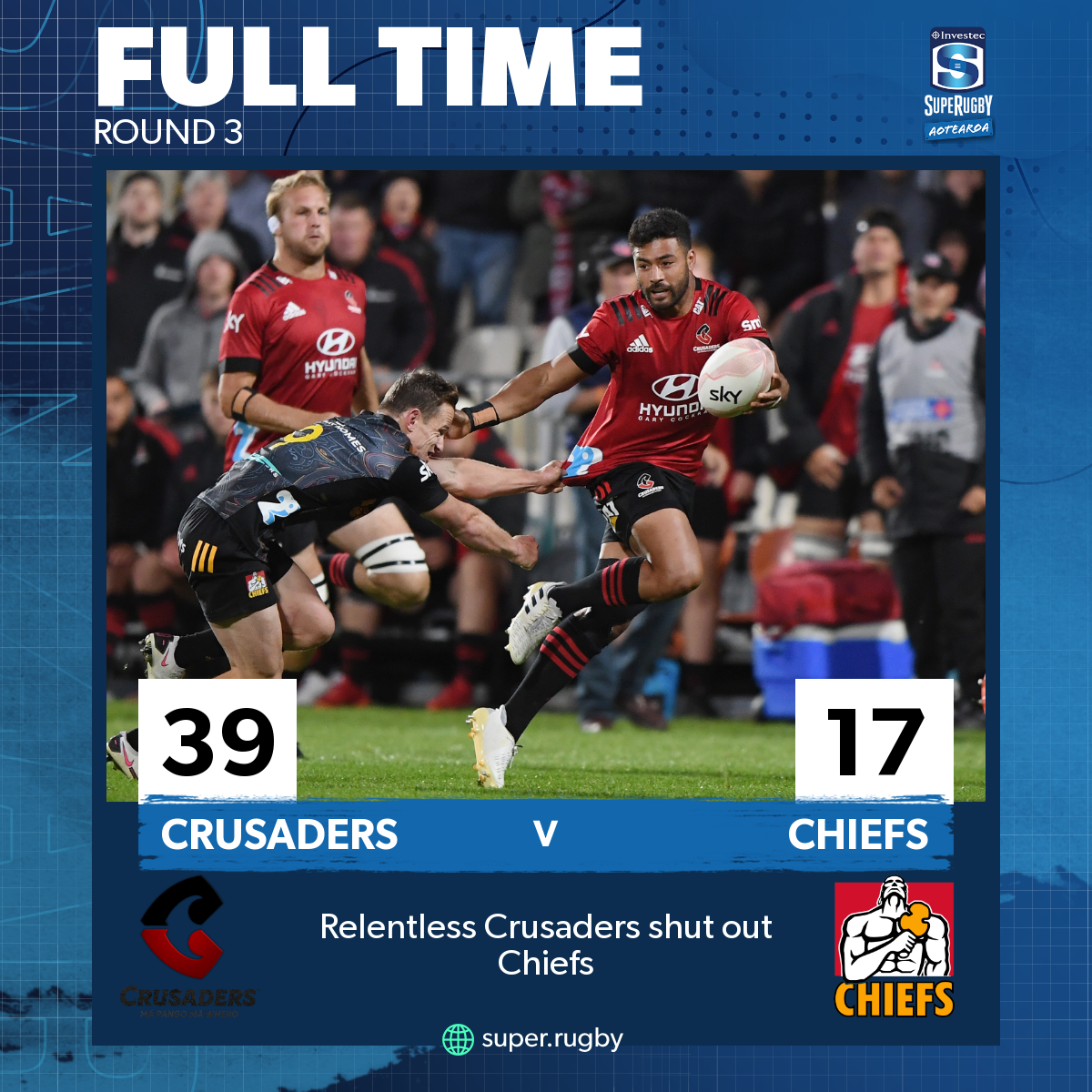