The Chiefs secured their first-ever victory in Super Rugby Aotearoa in remarkable fashion by coming from 19 points down at half-time to beat the Hurricanes 35-29.

After 11 consecutive games with a victory, Warren Gatland's side looked all but certain to suffer a 12th against a dangerous-looking Canes outfit in Wellington before pulling off an incredible second-half fightback.

With both teams entering the match winless after two games this season, it was a battle to see who would be left holding the wooden spoon, though neither really deserved it in the end and the Canes will be left wondering where it all went wrong.

The Chiefs did most of the running early on and came close to scoring a try on at least two occasions with their backs looking dangerous.

But with neither opportunity converted, it was the Canes who took the lead on 10 minutes when Jordie Barrett collected a pass out wide and scythed through the defence before offloading it to Luke Campbell for the try.

The Chiefs hit back almost immediately, however, as they strung together a few solid phases and made their way into the Hurricanes 22 where Samisoni Taukei'aho handed off a defender and got the pass away to Kaleb Trask, who ran in under the posts.

The try-fest continued within moments as the Hurricanes went back on the attack, Ngani Laumape running a great line to create the opening for Ricky Riccitelli, who managed to get the ball down in the corner amid plenty of attention from several Chiefs defenders.

The Canes' third try came courtesy of a Chiefs error, Trask making an absolute hash of an up-and-under inside his own 22 to turn over possession. Collecting the ball, Laumape spotted some space out wide and sent a crossfield kick to Salesi Rayasi, who produced a strong finish in the tackle to dot the ball down. Barrett nailed the unlikely conversion out wide as the Canes opened up a 19-7 lead.

The Canes were cutting open the Chiefs defence seemingly at will with nearly every possession, and after another burst upfield led to a penalty advantage and an attacking line-out, it seemed only a matter of time before they found the opening they were looking for, as Rayasi stormed through a gap for his second try of the evening.

The Chiefs came desperately close to hitting back on either side of half-time but were denied on both occasions, the first when they were held up over the line and the second when the TMO ruled out a try from Damian McKenzie for a second movement in the tackle just before he dotted down.

They kept attacking, however, and after coming up short with their rolling maul, they sent it out wide where substitute Chase Tiatia was able to ride the tackle and stretch over the line.

What followed was a candidate for try of the season as the Chiefs hit back again with a superb team effort. Collecting an up-and-under well inside his own half, McKenzie broke the line and charged up the field, offloading beautifully to Tiatia who shrugged off one defender and produced another barnstorming run before finding Brad Weber on his inside for the score.

Suddenly it was all the Chiefs, and after setting up an attacking line-out five metres out, their rolling maul needed a couple of cracks before barreling over the line, with Naitoa Ah Kuoi getting the try. McKenzie was on target again and suddenly the Chiefs, having trailed by 19 at half-time, were two points in front with 15 minutes to play.

The shellshocked Canes were given a shot at goal not long after and a chance to retake the lead, but Barrett couldn't find the target. When he got another chance to do the same from close to his own half a few minutes later, he made no mistake, despite it being his toughest kick of the match.

But the Chiefs were looking a totally different side with ball in hand now, and they seemed unstoppable as they strung the phases together and gradually made their way towards the line, with Luke Jacobson the man eventually getting the try.

Having just scored, Jacobson then won a crucial penalty turnover for his side with the Canes running from inside their own half, giving McKenzie the chance to kick for goal and complete a stunning turnaround. The kick was just wide but there was no time left for the Canes to come again as the Chiefs completed the unlikeliest of comebacks. 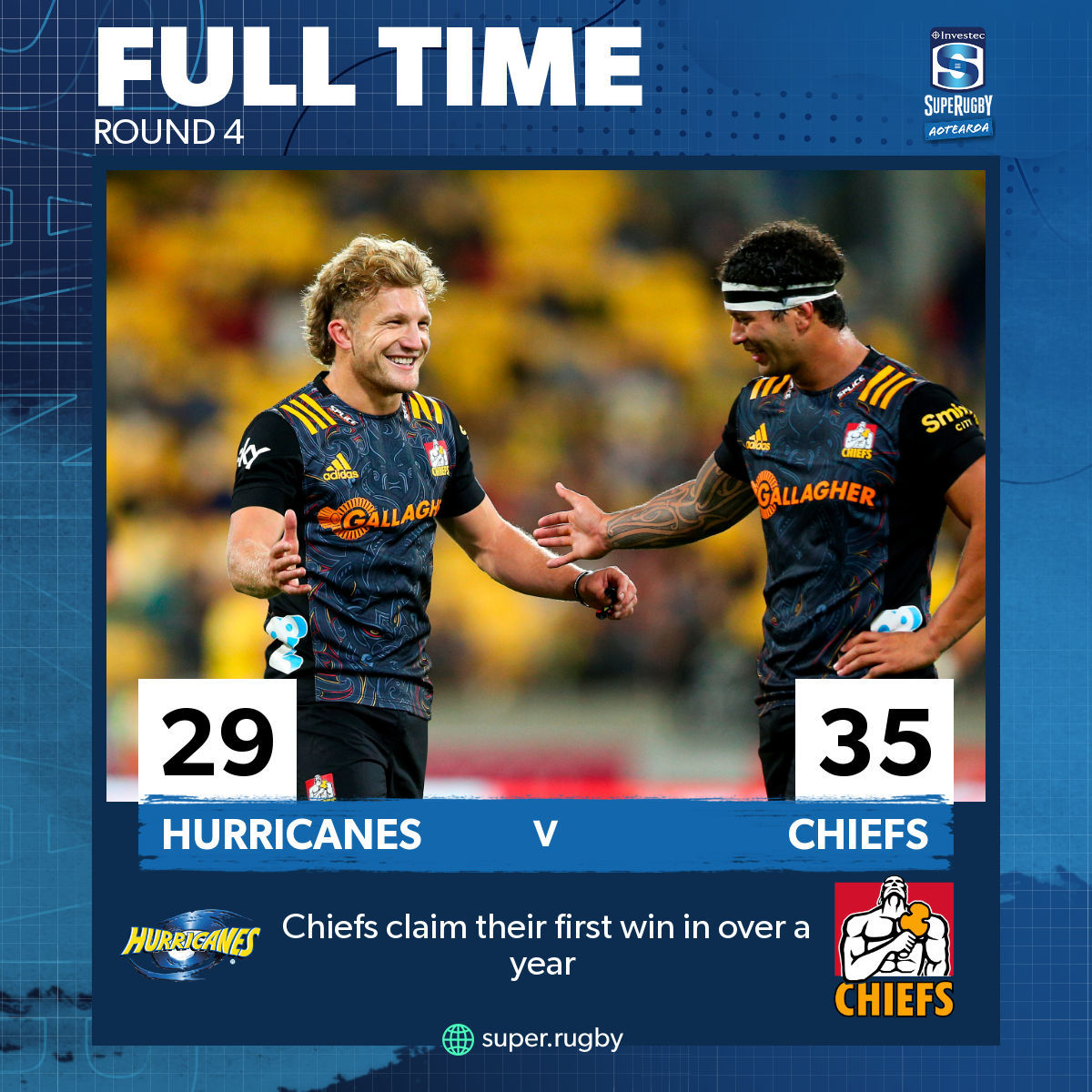