Chiefs beat the Blues with last-gasp try in Hamilton thriller

The Chiefs snatched an incredible 15-12 victory over the Blues with the final kick of the match thanks to a last-minute try from Damian McKenzie.

While the Chiefs arguably looked the more exciting of the two sides, making several impressive linebreaks during the match, the Blues were more clinical when it mattered and looked to have done enough to secure the win - until McKenzie's last-gasp heroics snatched victory from the jaws of defeat.

Having gone 11 matches without a Super Rugby victory, the Chiefs now lie third on the Super Rugby Aotearoa table after two wins in a row, while the Blues slump to their second successive loss following last week's defeat to the Crusaders but remain in second place.

There was plenty of enterprising play in the opening minutes, with the Chiefs immediately looking a more confident outfit following last weekend's long-overdue win over the Hurricanes and the Blues proving equal to them.

A great break from Quinn Tupaea in the 12th minute nearly sent the Chiefs through but his midfield partner Anton Lienert-Brown couldn't hold on to the pass amid plenty of attention from the Blues defenders.

The stalemate continued until the Blues earned a penalty and decided to have a crack up close rather than take the points on offer. That led to a couple more penalties for the attacking side, but just when it seemed as if the Chiefs had escaped the danger by earning a line-out for their troubles, they made a total hash of the throw-in, which finally allowed Akira Ioane to dot down after spinning out of a couple of tackles.

Moments later, the Chiefs had a chance to lay a platform with a line-out in Blues territory, but this time the throw-in wasn't straight, and possession was turned over again.

The Blues were nearly in for their second try on 30 minutes when Mark Telea was freed up on the outside and decided to go for the line, but a desperate try-saving tackle from McKenzie saved the day.

Another great line break from Tupaea nearly saw the Chiefs hit back with their opening try of the evening, but the hosts were struggling to apply the finishing touch after getting themselves in a good position and an attempted miracle pass from Kaleb Trask ultimately saw another chance go begging.

With five minutes to go in the half, the Chiefs again opted to kick for touch rather than extend their lead, but a great steal from Naitoa Ah Kuoi after the line-out saw the home side get out of jail once again.

A few minutes later, they had another chance to take the three points; again they kicked for touch and again the Chiefs forced the turnover.

The Chiefs nearly made them pay with the final play of the half after another great break from Brad Weber took them right to the line, but again they lacked the clinical finish they needed and the final pass didn't go to hand.

The Chiefs earned a kickable penalty early in the second half, and unlike the Blues, they decided to take the points on offer to reduce the deficit to four.

The Chiefs came desperately close to scoring on 52 minutes when, camped near the Blues tryline, Trask sent a grubber kick through for Anton Lienert-Brown, but the centre just couldn't quite maintain control of the ball as he attempted to dot down. The Chiefs decided to set up the rolling maul from their penalty advantage, but the ball was held up over the line and the Blues escaped.

When they got another penalty advantage for offside a few minutes later, the Chiefs opted for another attacking line-out up close, and this time they got the try they were looking for, with hooker Samisoni Taukei'aho grounding the ball on the line. McKenzie couldn't add the extras but the Chiefs were in front for the first time in the match.

Their lead didn't last long, however, as the Blues went on the offensive in the midfield and swung it out wide to substitute back-rower Tom Robinson, who ran a fantastic line to beat the defence at some speed before dotting down in the tackle. Black missed the conversion but the Blues were back in front leading 12-8.

Twelve minutes from time, the Blues earned another penalty and kicked for touch, sensing an opportunity to potentially put the game beyond the opposition. They looked to have gotten the score after a line-out drive took them over the line, but the referee sent it upstairs and the try was ruled out for obstruction.

With time running out, the Chiefs went all out on attack and spent several minutes camped in the Blues 22, but they couldn't find a way over the line and another lost line-out finally saw possession turned over.

Their chance looked to have come and gone, but with a minute to go, the Chiefs found the bit of magic they were looking for. From a sensational counter-attack in midfield, they took it all the way to the line where McKenzie was able to turn around and wriggle out of a tackle before crashing over. The fullback took his time to nail the conversion as the final hooter sounded to hand the Chiefs victory. 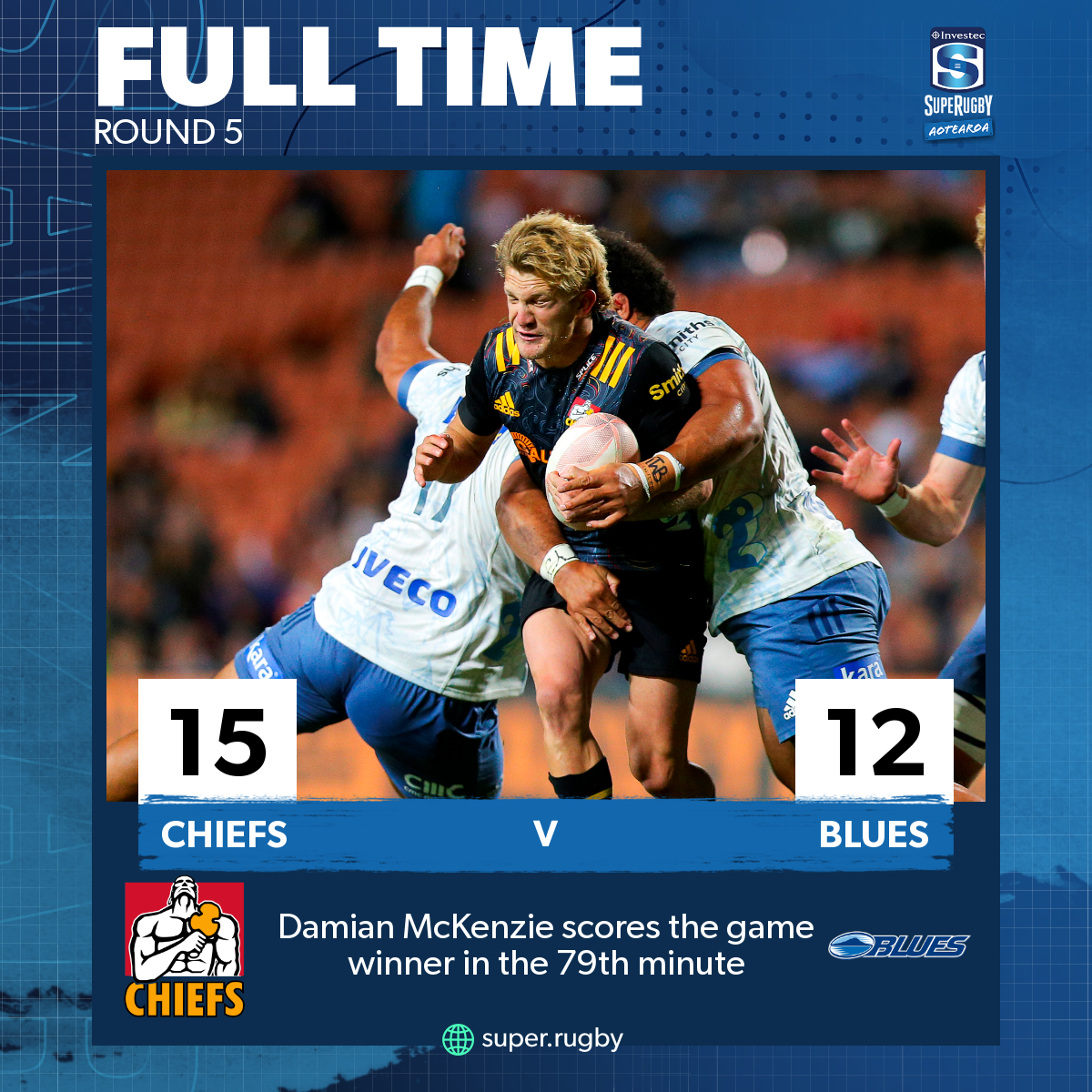