Hurricanes finish with a flourish to down Highlanders in Wellington

The Hurricanes wrapped up their Super Rugby Aotearoa campaign on a high note with a 41-22 victory over the Highlanders at the Sky Stadium.

Despite being a dead rubber, it was another typically hard-fought and competitive Super Rugby encounter, with the Hurricanes only managing to pull away from the visitors in the final 10 minutes, ultimately outscoring them by six tries to three.

While the win wasn't enough to lift the Canes from the bottom of the Super Rugby Aotearoa table, it will no doubt give them some confidence heading into the Trans-Tasman competition.

The Highlanders were given an early shot at goal when Tyrel Lomax was pinged for collapsing the scrum, and Mitch Hunt made no mistake to open his side's account.

But it didn't take the Hurricanes long to hit back. Showing a real willingness to run with the ball, the ball was flung out wide, where some great interplay between the backs and forwards created the space for No 8 Devan Flanders to crash over for the opening try of the match.

The Canes continued to look dangerous and came close to adding to their tally on two occasions, with only some desperate defence from the Highlanders on their own try-line keeping them out.

Fifteen minutes in, both teams saw a player sent to the bin for foul play at the ruck, as the Canes lost Dane Coles and the Highlanders lost Mitch Hunt. Hunt made the initial high tackle, which caused Coles to elbow the flyhalf before Hunt responded by shoving the hooker in the face.

From the ensuing penalty, the Highlanders powered their way up the field, where a couple of highly effective pick and drives saw them bulldoze their way over the line via Josh Dixon. Taking over for the sin-binned Hunt, Sam Gilbert added the extras to put the visitors three points clear.

The Highlanders were in for their second try not long after as they set up an attacking lineout and a rolling maul which carried them all the way to the line before it was flung out wide for Jona Nareki to cross over.

But the Hurricanes hit back with their second try shortly before half-time courtesy of a rolling maul of their own, with Coles breaking off the back and charging straight through Aaron Smith and Hunt for the score.

The Canes would also earn a penalty on the stroke of half-time and take the points on offer as the Highlanders took a 17-15 lead into the break.

Picking up where they left off, the Canes were in for their third try of the match just one minute into the second half when Ngani Laumape was the first to arrive to Barrett's clever little kick through. All Laumape had to do was use his pace and fall down on the ball, which had already crossed the line, to get the score. Barrett nailed a tough kick from out wide as the Canes went back in front.

Back came the Highlanders, however, hitting back within minutes as a long pass out wide from Smith to Gilbert saw the winger slide in for a try. But unfortunately for the visitors, the Canes thought they'd spotted a knock-on in the build-up, a suspicion that was confirmed when Coles sent up the captain's referral and got the try chalked off.

Instead, it was the Canes who scored again on 52 minutes when Ruben Love broke clean through the line before a simple offload to Du'Plessis Kirifi saw the young flanker storm in for the try.

The Highlanders needed a quick response and they found it after setting up an attacking lineout and a rolling maul, allowing Ash Dixon to find a little hole and charge through for the try.

But the Canes weren't done yet and with just under 10 minutes to go, they scored a potentially match-winning try when Cam Roigard made a break from the back of the scrum and timed a perfect offload to Laumape, who charged up the field before offloading to Braydon Iose for the score.

There was time for one more five-pointer from the Canes as the ball found Salesi Rayasi out wide, allowing the winger to skin Nehe Milner-Skudder and run in for the try to well and truly kill the game off. 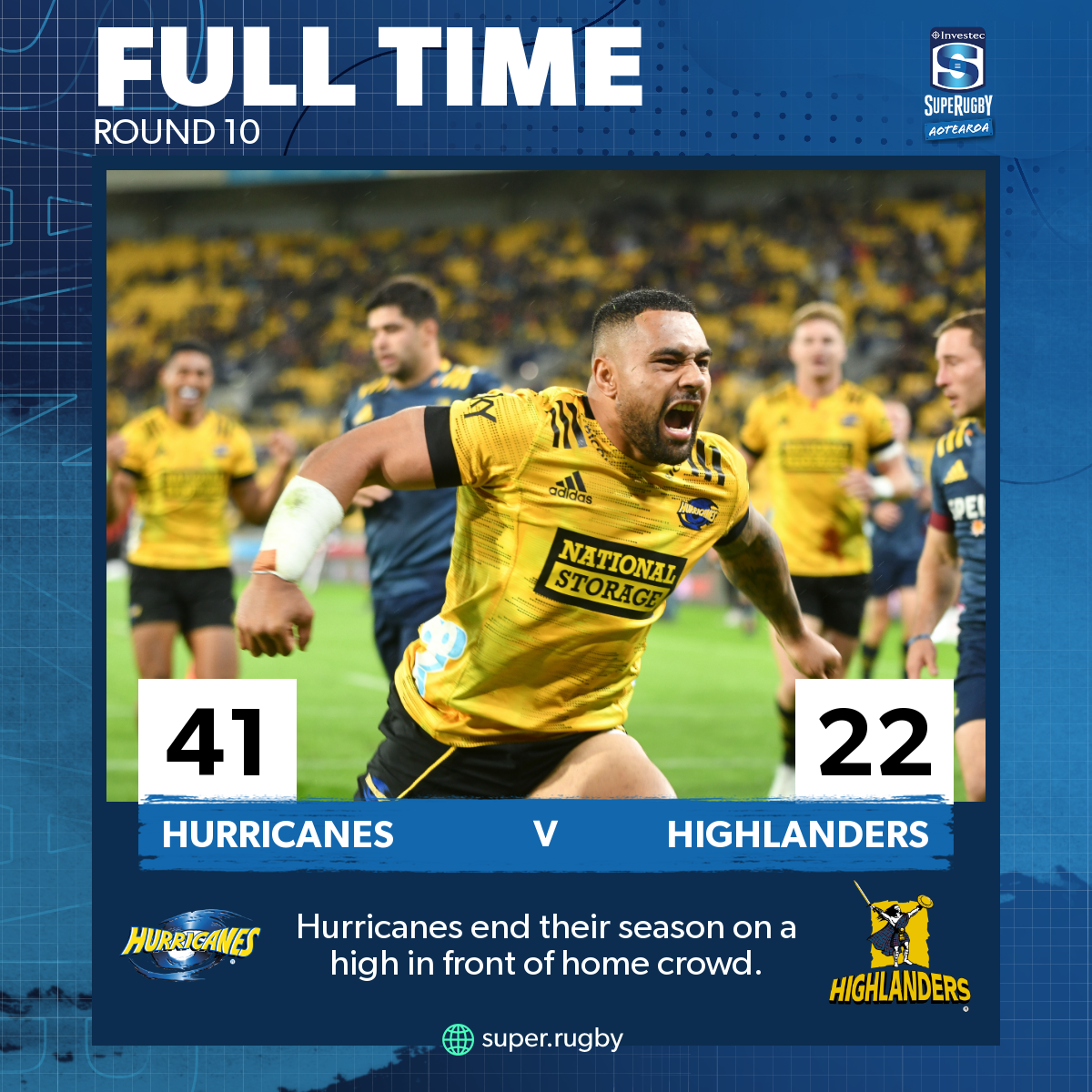