The Blues ran in three late tries to secure a 39-19 victory over the Chiefs in their final Super Rugby Aotearoa match of the season.

The Chiefs rested several first-choice players in anticipation of next week's final but still gave a pretty good accounting of themselves, and it wasn't until late in the second half that the Blues finally pulled away on the scoreboard - thanks in part to their more experienced bench proving decisive in the closing stages.

The Blues ultimately outscored the Chiefs six tries to one to finish with a bonus-point win that leaves them level on points with the men from Hamilton, who nonetheless move on to next week's final against the Crusaders by virtue of their superior win rate.

The Chiefs took an early 3-0 lead when Bryn Gatland was handed a shot at goal following a high tackle and slotted it from 45 metres out.

Moments later, Blues debutant Zarn Sullivan attempted a similar shot from his own halfway line but came up just short.

The Blues came to within inches of scoring after keeping the ball in hand and working their way towards the try-line following more than a dozen phases, but the ball was held up over the line and the Chiefs escaped.

Shortly after, Chiefs No 8 Pita Gus Sowakula broke clean through following a turnover at the ruck and nearly ran all the way for a try before some desperate Blues defence averted the danger.

The opening try came courtesy of a defensive error from the Chiefs, as they allowed Blues hooker Kurt Eklund to charge straight through a massive gap near the fringes and all the way for the score.

The Chiefs reduced the deficit shortly after following an infringement at the breakdown, allowing Gatland to convert his second penalty of the evening.

When an illegal tackle handed the Blues a penalty right in front, they kicked for the corner instead, and there was no stopping them from close range as Adrian Choat dotted down on the line - coming away with a bloody face for his troubles courtesy of an errant boot.

The Chiefs nearly hit back when the Blues made a hash of a lineout inside their own 22, but the ball was knocked on with the try-line beckoning.

The visitors got another chance a few minutes later and looked to have scored via prop Ollie Norris - but the Blues sent up a captain's referral and successfully got the try crossed off for an offside infringement in the build-up.

As the half-time hooter sounded, the Chiefs earned a shot at goal right in front and captain Sean Wainui decided to take the points on offer as it finished 14-9 to the Blues at the break.

Seven minutes into the second half, the Chiefs reduced the deficit to just two points when Gatland was handed another shot at goal and made it four from four.

The inexperienced Chiefs were proving a tough nut to crack, but the Blues finally got their third try when the ball was shifted from one side of the field to the other and Sullivan was able to run a great angle straight into a gap for his first Super Rugby try. Black's conversion was just wide as the Blues opened up a seven-point lead.

Just after the hour mark, the Chiefs finally got the try they'd been threatening to score all match. After a lengthy period of attack inside the Blues 22, the ball was shifted out wide where Gideon Wrampling was able to break a tackle and straighten the line before offloading to Bailyn Sullivan for the score. Gatland nailed a superb kick from right near the touchline to level the scores.

The Blues went right back on the attack from the restart, however, earning a penalty for their troubles and retaking the lead via Black's boot.

With seven minutes to go, the Blues delivered a potential killer blow when Hoskins Sotutu peeled off the back of a five-metre scrum and powered over the line despite the attentions of several defenders. The Chiefs sent up a captain's referral for potential obstruction in the build-up but the TMO didn't bite. Black slotted the conversion to put the Blues 10 points clear.

The Chiefs' resolve finally broke down in the closing stages of the match, as the Blues ran in two more tries via substitutes Sam Nock and AJ Lam to ensure they finished their season on a high note. 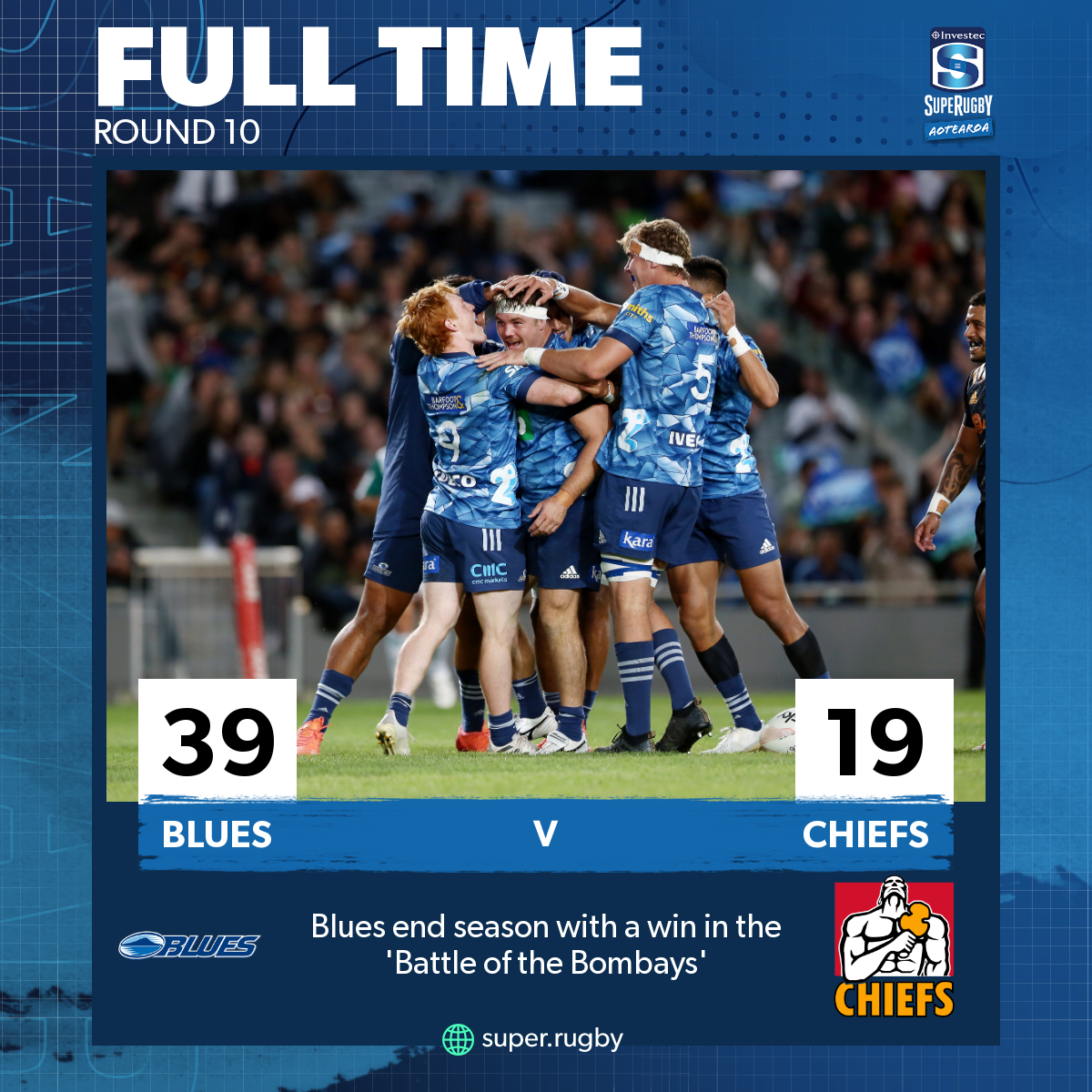