Clinical Brumbies too good for the Force in Perth

The Brumbies defeated the Western Force 27-11 in their opening Super Rugby AU match in Perth on Friday.

The visitors soaked up heaps of pressure from the Force, who failed to capitalise on several opportunities as they put on an entertaining loss in front of their home crowd.

The hosts enjoyed a bright start, earning an offside penalty under the poles, which captain Ian Prior popped over.

After consistent pressure, the Brumbies thought they were in for the first try of the game but Marty Banks' lengthy pass just drifted forward and referee Graham Cooper called them back for the advantage. The Force were superb in defence early on, staving of wave after wave of attack before forcing a knock-on.

A quarter of the way through the contest, the Brumbies drew level courtesy of a Noah Lolesio penalty. And just minutes later, the fly-half would be put through a hole thanks to a superb ball from his No. 9 Nic White and he dotted down under the poles in splendid isolation. The converted try took the scoreline to 10-3.

In a decision that took the officials some time, the Force were then denied another try when lock Jeremy Thrush formed a ruck in the process of getting the ball over the line, resulting in a Brumbies penalty. It was a huge let-off for the Brumbies, who were on their line and on a warning for repeated infringements.

Prior and Lolesio each slotted penalties before halftime and the players went down the tunnel with the score at 6-13 in favour of the visitors.

The Brumbies enjoyed a fast start to the final stanza, with centres Len Ikitau and Irae Simone combining beautifully for a try. Ikitau made the half break on the outside and provided an excellent offload to his inside centre for the score. The conversion took them out to a 14 point lead.

After prolonged pressure deep in the Brumbies 22m, the Force got some reward when James Slipper was given a yellow card for repeated infringements. But poor management at the back of the ensuing driving maul led to a turnover and the Brumbies were let off the hook once again.

The Brumbies continued to suck up the pressure from the Force and then prove lethal on the attack. A planned move off the back of the scrum in mid-field saw Banks put into space, who drew his man and found replacement winger Issak Fines-Leleiwasa, who had one man to beat and did so with aplomb on the outside. Lolesio added the extras to take the score to 6-27 with seven minutes to play.

The Force would finally get reward for their hard graft after stringing together multiple phases on the Brumbies line, with Argentine scrum-half Tomas Cubelli sniping over from a metre out. The consolation try prevented a bonus-point win for the Brumbies. 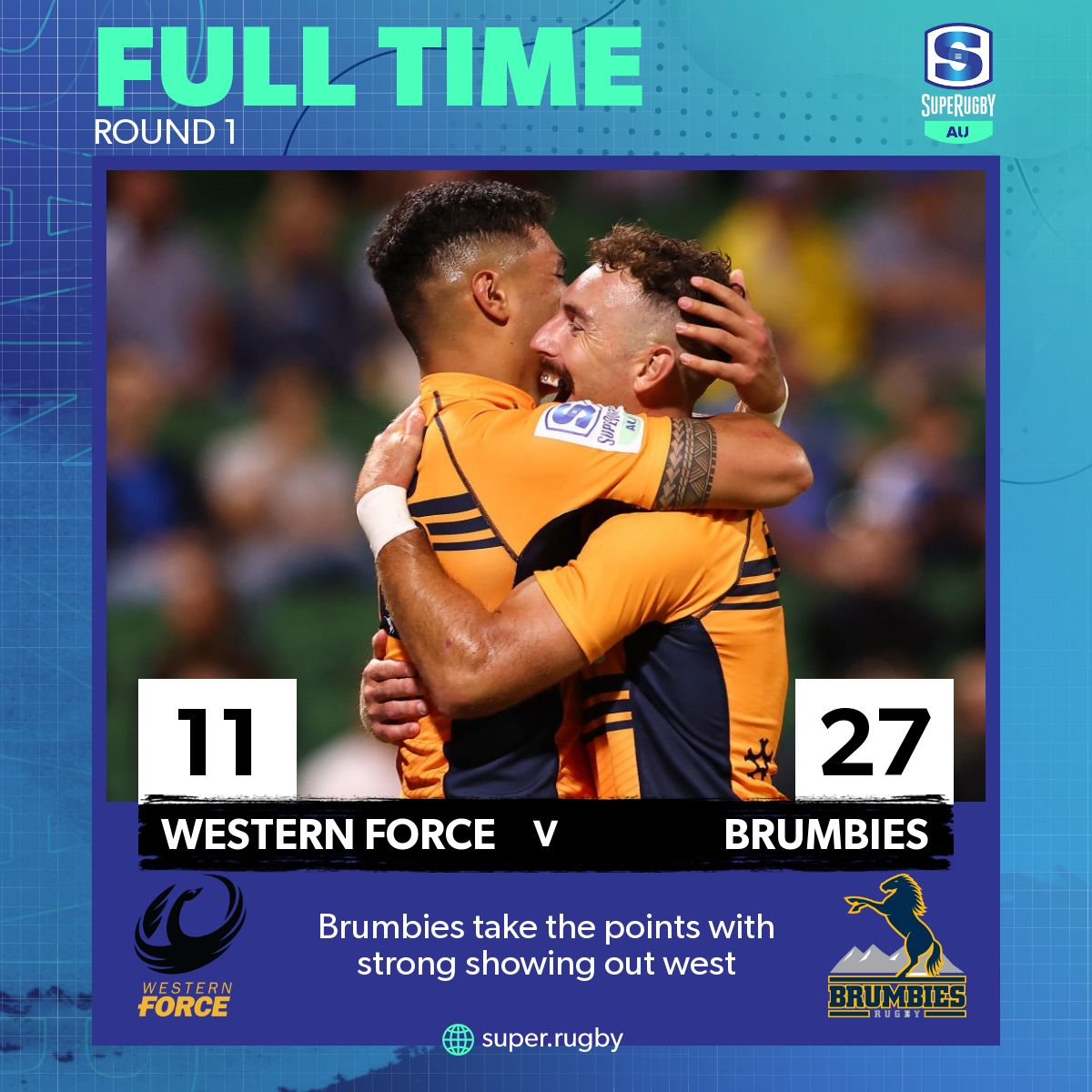