Flyhalf Domingo Miotti struck a penalty deep into stoppage time as the Western Force snatched a dramatic 31-30 victory over the Waratahs in Perth on Saturday.

The win for the Force sees them move above the Rebels and up to third in the Super Rugby AU standings.

After seven consecutive losses to start the campaign, the Waratahs would be gutted at the manner of the defeat as they remain rooted to the bottom of the table.

The 'Tahs got off to the worst possible start after flanker Lachlan Swinton received ten minutes in the sin bin in the second minute after being adjudged to have dished out a tip tackle.

The Force took immediate advantage of being a man to the good with prop Tom Robertson powering his way over to score the first try of the game in the third minute.

Miotti converted and then added a penalty as the Force took a 10-0 lead after just seven minutes.

The Waratahs though hit back almost soon as Swinton returned to the field with Will Harris diving over for a five-pointer in the 16th minute after a period of constant pressure.

Ben Donaldson miraculously slotted the conversion from the left-hand corner via a drop kick after he took too long in placing his ball.

The Waratahs flyhalf added a penalty midway through the first half to draw the teams level on the scoreboard.

The Force though opened up an eight-point gap in the final 15 minutes of the opening period with hooker Feleti Kaitu'u peeling away to score and Miotti adding the conversion and then a drop goal for his team to take 18-10 lead into the halftime interval.

The Waratahs started their comeback early after the break with two tries in the first eight minutes of the second period. 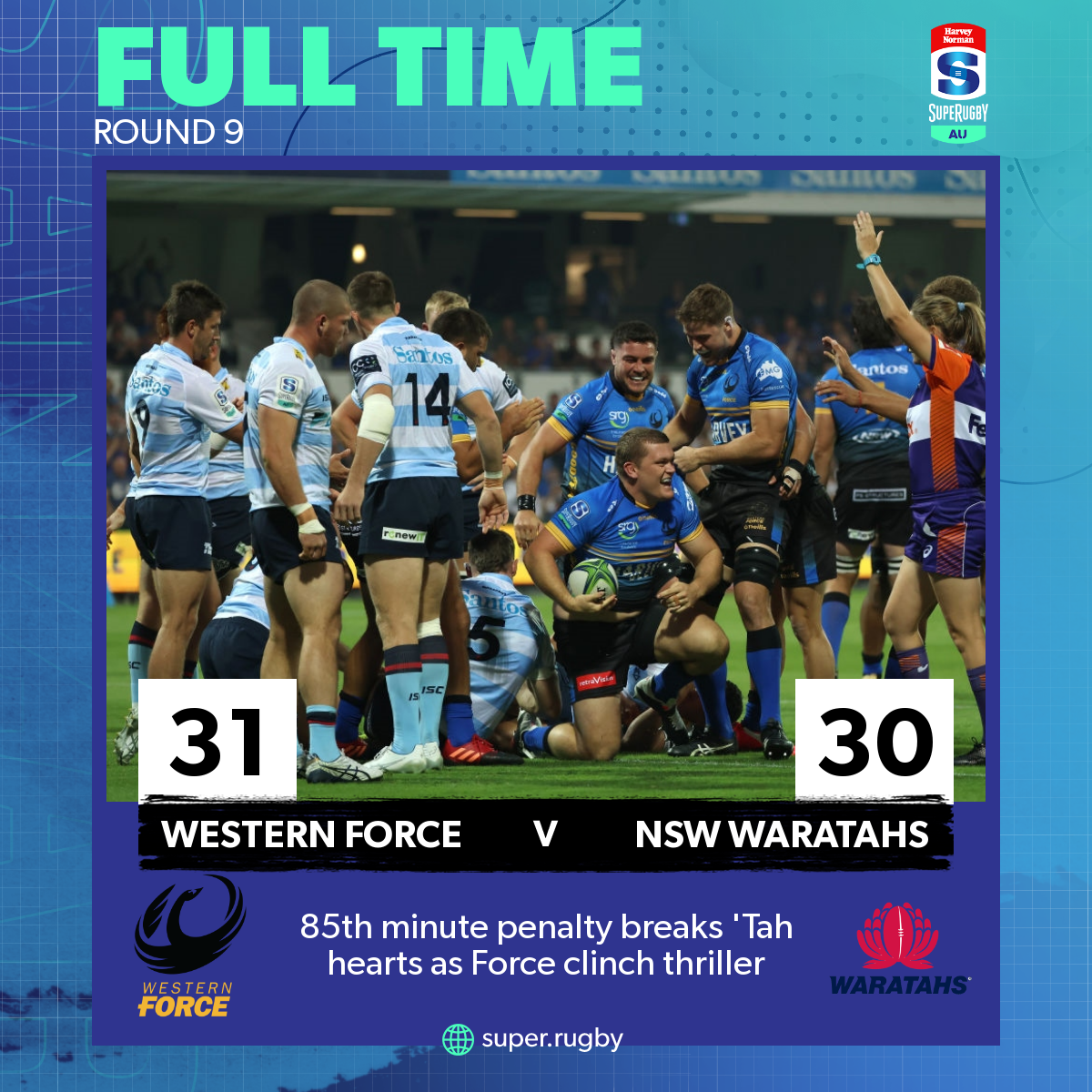 First Jack Maddocks went over and the fullback was involved again as he broke the line to set up wing Alex Newsome to score.

Donaldson converted both five-pointers as the Waratahs turned the scoreboard around to lead 24-18.

Miotti reduced the deficit with a penalty but Donaldson replied with two three-pointers of his own as the Waratahs took a 30-21 lead going into the final 10 minutes.

The Force looked dead and buried but left-wing Jordan Olowofela gave them some hope, scoring a try with eight minutes remaining which Miotti converted to make it a two-point game.

The Waratahs seemed to have clinched victory when they won a penalty deep in their own half in the final minute, however, reserve hooker, Tom Horton overthrew the subsequent line-out, handing the hosts one last chance to launch an attack.

The Force started the attack just inside their half and went through 23 phases before they won a penalty in front of the poles which Miotti converted to give his team a dramatic win.