Chiefs have too much firepower for Brumbies in Hamilton

The resurgent Chiefs were at their irrepressible best as they downed the Brumbies 40-19 in Saturday's Super Rugby Trans-Tasman clash at FMG Stadium Waikato.

It was a pretty complete performance from the Super Rugby Aotearoa finalists, with the forwards laying a strong foundation that allowed the dangerous backline to express themselves, resulting in a six-try rout.

Setting the tone for the rest of the match, the Chiefs opened the scoring after just three minutes courtesy of textbook line-out and rolling maul, as the New Zealanders' pack proved too strong to stop from the five-metre line, with Tupou Vaa'i eventually being awarded the try.

But the Brumbies hit back not long after with a pretty straightforward try of their own, as a clever little pass from Ryan Lonergan inside Chiefs territory created the opening before quick ball out wide saw No 13 Len Ikitau crash over in the corner.

Back came the Chiefs, however, very nearly responding with a carbon copy of the first try, but this time the Brumbies managed to repel the maul up close.

When the home side earned a five-metre scrum moments later, however, there was no stopping their pack on this occasion, as a strong shove ended with Luke Jacobson picking the ball up from the back and diving over.

The Chiefs were throwing everything at the Brumbies, attacking with real intent, and the third try came from the back of another scrum after another seemingly unstoppable charge towards the line, as Jacobson picked up his second try in a very similar fashion to the first.

With time running out in the first half, the Brumbies found themselves on the attack and with a chance to score some more points before the break, but a disappointing knock-on from Lonergan from behind the ruck saw the opportunity go begging.

The second half started in much the same way as the first, with the Chiefs bossing territory and possession and stringing together phase after phase to keep the Brumbies under pressure - pressure which eventually told when McKenzie ran the perfect line to crash over from up close.

The procession continued not long after as the Chiefs scored try No 5 courtesy of a quick pop pass from Lachlan Boshier to Alex Nankivell after McKenzie had shifted it to the right with a long, flat pass.

The Brumbies desperately needed a lift, and they found it via two substitutes barely on the field, as Issak Fines-Leleiwasa produced a clever little burst from the back of the maul before offloading to Tom Cusack for the try.

But this was always going to be the Chiefs' night, and their sixth try of the evening was one of their best, as they launched an attack from their own 22-metre line, chipping over the top through Chase Tiatia before Kaleb Trask regathered the ball and offloaded to Anton Lienert-Brown for the score.

To make matters worse, a TMO referral for high shot on McKenzie in the build-up saw Darcy Swain get his marching orders even as McKenzie added the extras.

There was time for a consolation try from Rob Valetini - one of the best Brumbies performers on the night - moments before the final hooter sounded, but it still ended in a big win for the dangerous Chiefs who continue to go from strength to strength. 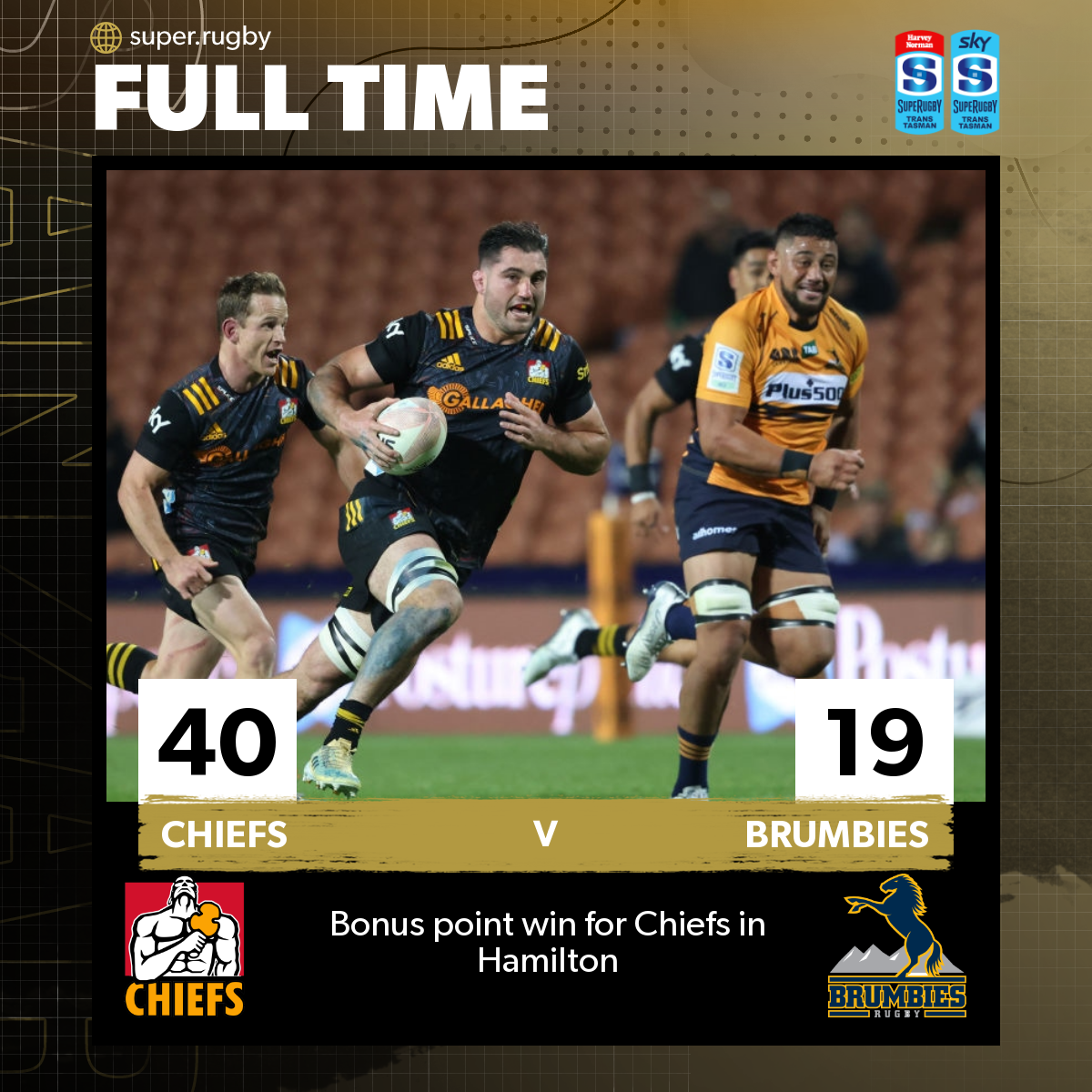