The Highlanders put together a clinical performance to defeat The Western Force 25-15 in their Super Rugby Trans-Tasman clash on Friday in Perth.

The men from New Zealand were staunch on defence and ruthless on attack, with co-captain Arron Smith and winger Jonah Nareki putting on sublime performances.

The home side enjoyed all the ball early on, with Argentine scrumhalf Tomas Cubelli constantly testing the defence and lock Sitaleki Timani bursting through a tackle and going on a stunning run. But the Highlanders weathered the storm and pounced on an isolated ball runner to force a turnover.

Smith - playing in his 160th Super Rugby match - created the opening try of the match in the tenth minute. In a planned lineout move, Smith skated round the back of the lineout, broke one tackle and accelerated away before offloading to a flying Jona Nareki, who went over untouched. Mitch Hunt added the extras in what would prove to be a poor night off the tee for the flyhalf.

The Force attempted to play rugby in their half and the Highlanders defended successfully, creating multiple turnovers but were unable to convert them any to points. Play came to a standstill midway through the half after Force flyhalf Jake McIntyre suffered a serious head knock.

But the pressure would finally pay off for the visitors. After earning a lineout 5m out, hooker Ash Dixon threw to the front and prop Ayden Johnstone barrelled himself over into the corner from close range for a well-worked try.

The Force finally got on the board in the 27th minute thanks to some powerful scrummaging from seasoned Argentine prop Santiago Medrano. His fellow countryman, Domingo Miotti, split the uprights to take the score to 12-3.

Later, the Highlanders then exploited an overlap, which saw Nareki make valuable metres. Flanker Shannon Frizell also featured in a good run before the Force were pinged for offside. Play broke down and when Smith opted for the three points, Hunt obliged.

Ill-discipline from the Force gave the Highlanders a penalty near the centre spot, which Hunt put out just 6m from touch. A driving maul formed off the back of lineout and Smith timed his run perfectly to hold up the defence and put Scott Gregory in a half-gap. The bullocking centre showed good strength to break one tackle and ride another to get over the line.

But the Force weren't done yet. A good run from centre Henry Taefu saw his offload go forward off a Highlanders player and Cubelli scooped up the loose ball and scampered under the poles on the stroke of half-time. Miotti slotted the conversion and the players went down the tunnel with the score at 20-10.

The second stanza began with helter-skelter running rugby, eventually resulting in a penalty for the Force in midfield. They turned down a sure three points to kick for the corner. The drive after the lineout got no forward momentum, so Cubelli sent the ball wide and fullback Rob Kearney would end up with Hugh Renton on top of him, who earned the steal, ending the Force’s furore in enemy territory.

Another sniping attack from the Force would be quelled by fantastic Highlanders defence, with Frizell getting the turnover just 5m from his own line.

The home side were then reduced to 14 men in the 60th minute after Greg Holmes' swinging arm made contact with Renton in the tackle… and the Highlanders made them pay immediately.

Marshalled by the ever-present Smith, the forwards rumbled off the lineout until the drive collapsed on the line. A bullet skip-pass from Smith would eventually lead to Gregory crashing over for his second try of the night.

As the clock wound down, the Highlanders controlled the game with aplomb, playing in the right areas of the park and remaining resolute on defence.

But a late rally provided some entertainment for the Perth crowd. Some excellent ball retention, powerful running and a couple deft touches from Richard Kahui would see replacement prop Angus Wagner crash over the line in the 79th minute for a consolation try. 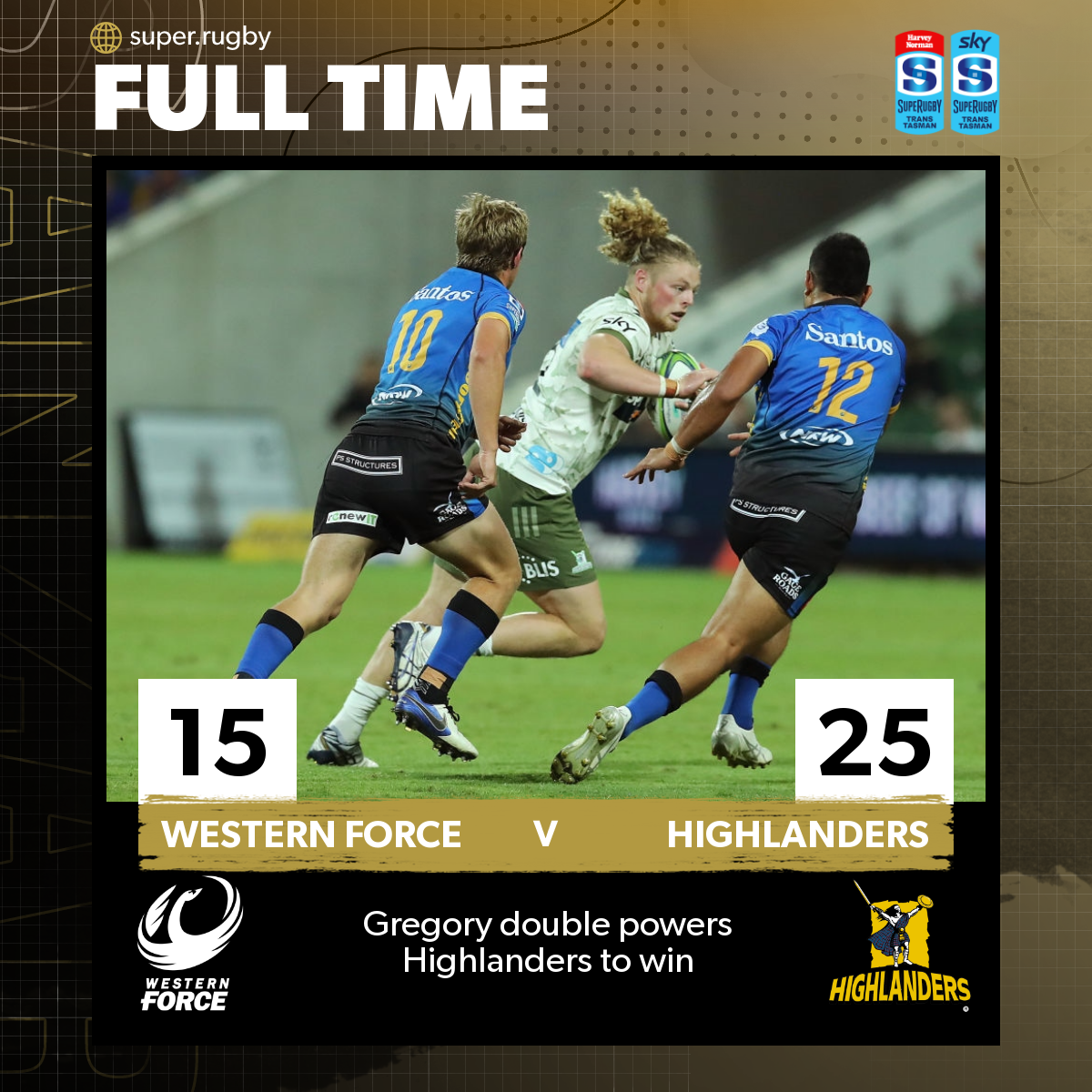