The Hurricanes romped to a record 43-6 win over the Western Force in their Super Rugby Trans-Tasman clash on Friday.

The Wellington-based franchise took full advantage of a Force team that couldn't finish off their opportunities with the ball in hand, leading to a seven tries to nil thrashing.

After weathering an early storm, the Force earned one of the first kickable penalties of the game when a Hurricanes player went off their feet at the breakdown. Starting after a superlative performance last week, flyhalf Domingo Miotti obliged.

Miotti made it a six-point lead just minutes later after another mistake at the breakdown from the home side.

However, the Hurricanes would get the first five-pointer on the board courtesy of overthrown lineout from the Force. Hooker Andrew Ready's throw went right over the top and it was scooped up by his opposite number Asafo Aumua, who busted two tackles and showed incredible pace to run 60m to score the try. Jordie Barrett added the extras.

The Hurricanes extended their lead after kicking for the corner and putting the Force under pressure. After a couple of phases, centre Peter Umgaga-Jensen floated a long ball out to his winger Salesi Rayasi who finished acrobatically in the corner. Barrett's excellent conversion took the score to 14-6 after 21 minutes.

After ten minutes of playing in their own half, a couple of strong runs from Hurricanes number eight Gareth Evans led to the Force defending for all their worth on their line. But good work from the Force forwards resulted in a much-needed turnover and scrumhalf Tomas Cubelli would clear with the boot.

The Hurricanes extended their lead on the cusp of halftime thanks to a brilliant steal from Tyrel Lomax in the tackle. The Force were hot on attack near the halfway line, but a loose carry from number eight Tim Anstee saw Lomax rip the ball away. Recognising the space, the Hurricanes took the ball wide and a flying Du'Plessis Kirifi would break one tackle and outpace the cover defence to slide over the whitewash.

The players trotted down the McLean Park tunnel with the home side boasting a comfortable 19-6 lead.

The Force had an opportunity early on in the second stanza thanks to a brilliant run from dangerous winger Toni Pulu, who evaded several tackles before floating a miracle ball over the top that didn't go to hand.

After setting up an attacking lineout, the Hurricanes would extend their lead. The Force shot up on defence too quickly and Barrett managed to smuggle the ball out to Wes Goosen, who turned on the afterburners, went around the cover defence and over in the corner for the bonus point try.

Again the Force were in prime position after a strong lineout drive in the 60th minute. But replacement flanker Ardie Savea, who was on the field for less than a minute, managed to earn a steal at the subsequent breakdown and Barrett kicked the relieving penalty into touch.

There was a nervous moment for Barrett after he got a cleanout wrong, making contact with a players head. It offered the Force some relief and after another penalty, they set up an attacking lineout on the Hurricanes 22m.

Seven phases later the Force were knocking on the door, but a long pass from Cubelli would miss its target and Rayasi controlled the loose ball with his feet before picking it up and running 90 metres in splendid isolation to score under the poles.

The Force seemed to finally get some reward for their endeavour in the 70th minute with a lineout drive going over the try line, but TMO Mike Fraser ruled obstruction.

Not a minute after the Force were celebrating what they thought was their first try, the visitors were back behind their poles shaking their heads. The following set-piece from the obstruction penalty saw a chip from Barrett gathered by Savea, who offloaded to Ngani Laumape who outpaced the defence to score the Hurricanes' sixth try, rubbing salt in the wounds.

Keeping the ball alive after the final hooter, the Hurricanes showed great support play and offloading skills as Goosen and Barrett combined to score the final try of the game. 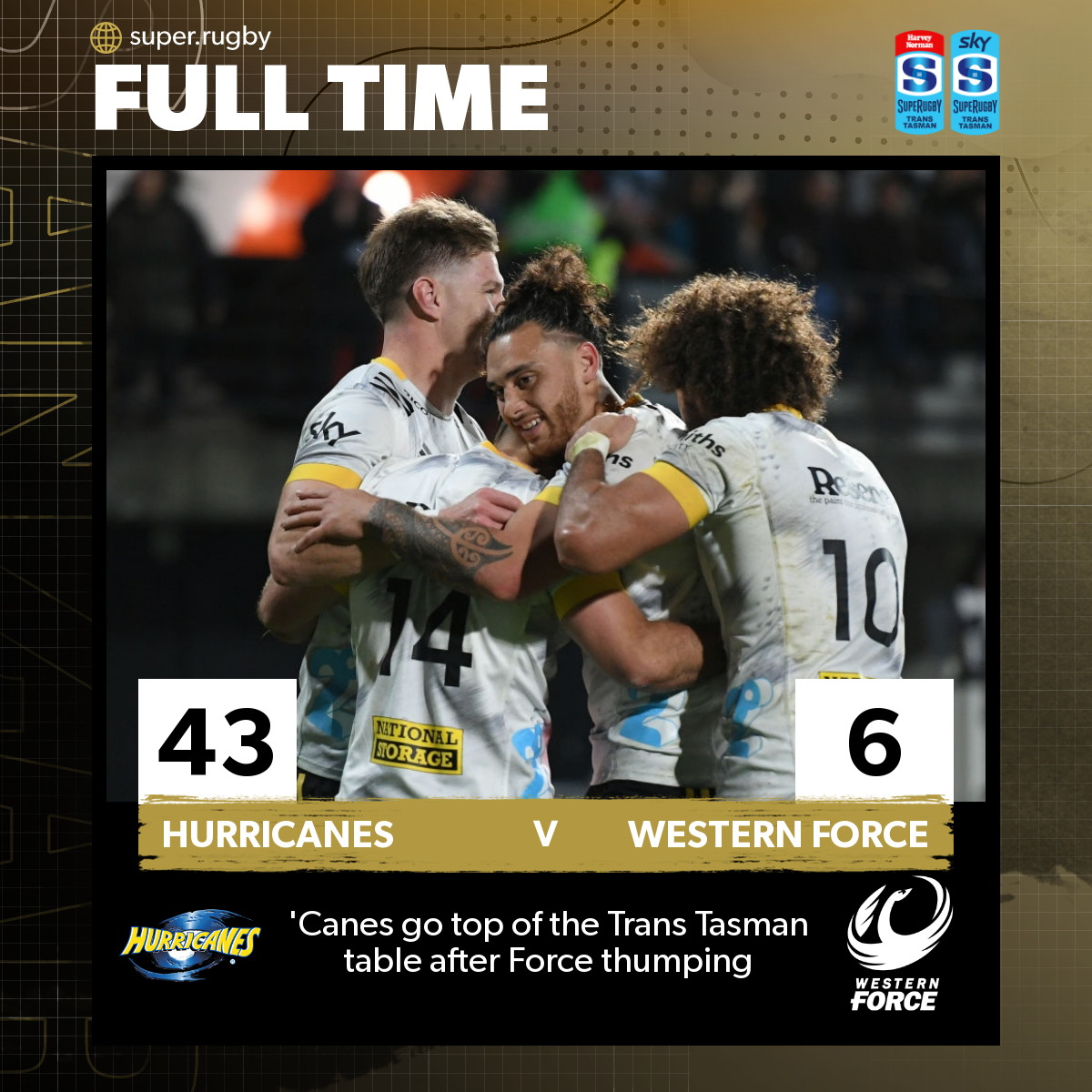