The Blues maintained their unbeaten record at Eden Park this season with a 37-24 victory over the Hurricanes on Saturday.

The Blues bounced back from last week's loss to the Sharks with an outstanding performance, especially from their pack, to outscored their Kiwi rivals five tries to four.

The Blues won most of the individual battles across the park with young fly-half Ihaia West giving a good account of himself while Charlie Faumuina, Patrick Tuipulotu and Jerome Kaino were all outstanding.

The result leaves the Hurricanes lying in third place in the ultra-competitive New Zealand Conference and teetering on the edge of the playoffs ahead of the June international break.

There are just three regular-season rounds left to play and with the 'Canes having a bye on the last weekend, they now face a tough task to finish in the top six.

The Blues led 15-7 at the interval thanks largely to a controversial penalty try.

The Hurricanes had taken the early lead with a try from Faifili Levave, who had an armchair ride at the back of a driving maul, but the game swung in the Blues' favour when the TMO Glenn Newman ruled that Matt Proctor had intentionally knocked down Ma'a Nonu's attempted pass inside to Bryn Hall and referee Garratt Williamson awarded a penalty try.

With Proctor in the bin, the Blues chased in with a second try via full-back Lolagi Visinia, who latched onto Pita Ahki's grubber.

The Hurricanes were left with a mountain to climb in the second half after Jerome Kaino powered over from short range and George Moala exploited a huge overlap out wide to score within five minutes of the restart to put the hosts 20-point clear.

Julian Savea touched down just before the hour mark with the classic 'Canes try from long range to give the men from Wellington hope but Blues lock Patrick Tuipulotu's try left the visitors trailing 32-12 with fifteen minutes to play.

More great running rugby saw Levave bag his second try and a bonus point for the 'Canes, but it was too little, too late to pull the game from the fire. 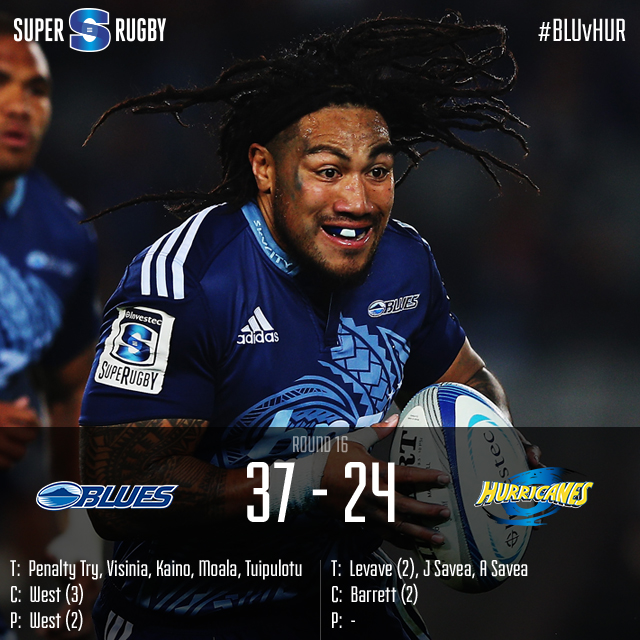