Stephen Perofeta's late try was enough for the Blues to come out on top of a see-sawing encounter with the Reds, winning 34-29 in Apia.

The talented replacement number ten was the Blues' fifth try-scorer on the night and for long periods Tana Umaga's side looked the better team on the field, leading 20-12 at the break after tries from Rene Ranger, Rieko Ioane and Kara Pryor.

To their credit the Reds never gave up, their forward power creating two tries including two for Taniela 'Tongan Thor' Tupou as Quade Cooper's boot kept them in the hunt.

But scores from lock Gerard Cowley-Tuioti and then Perofeta guaranteed a seventh win of the season for the Blues, who could have had more tries were it not for four on the night being ruled out by the officials.

In front of a disappointly low crowd in the Samoan capital due to ticket prices, those in attendance certainly enjoyed a tighter spectacle than many were predicting after the opening minutes.

It was a blistering start for the Blues, with Ranger stepping his way through the Reds' defence all too easily after the Reds had been turned over at the scrum, scoring in the second minute.

The second score wasn't far away either, TJ Faiane's smart pass releasing Pryor before the final pass put Rieko Ioane over in the corner. Francis couldn't convert, but the Blues held a comfortable lead at 12-0.

The Reds needed a response, not helped by the loss of captain Samu Kerevi to an ankle injury, but tighthead prop Tupou scored his first try when he burrowed over from close-range.

A scrappy period of play followed before Pryor scored the Blues' third try, going over off the back of a rolling maul.

To their credit the Reds responded swiftly, with hooker Ready in for Wallabies captian Stephen Moore powering his way over off the back of another effective driving maul from the Reds, one of their best weapons in recent weeks.

Quade Cooper converted but it was Francis who had the final say of the first half, knocking over a long-range penalty to give the Blues a 20-12 advantage.

A rare three-pointer from Cooper kicked off the second half to put the Reds within range of the lead, and they grabbed thanks to their third try of the match from replacement forward Adam Korczyk, Cooper banishing his early misses off the tee to land the conversion and make it 22-20.

In-form lock Cowley-Tuioti went over in respond for the Blues, switching the lead back their way after Francis converted, but the Reds were making progress up front, Tupou showing off the power that made him a star at schoolboy level as the 'Tongan Thor' to grab a second try.

With that effort the Reds led 29-27, as the Blues had a third possible try of the match ruled by the TMO, at the start of tense final ten minutes. 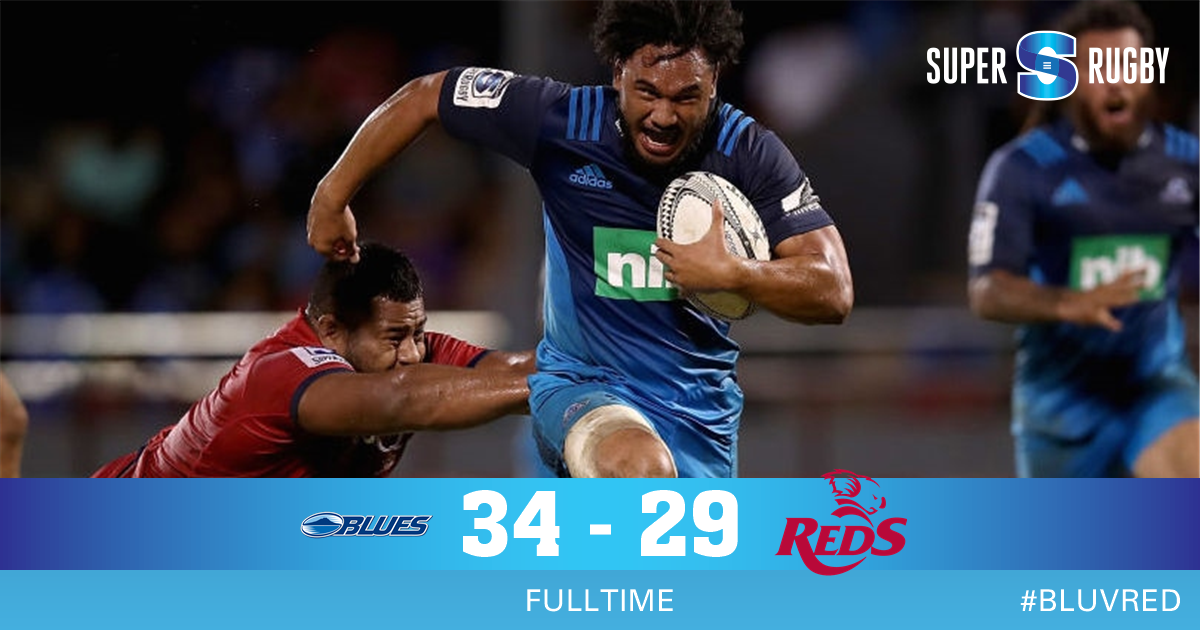 Having been the better side for most of the match a defeat would have been unthinkable for the Blues, and with seven minutes left they retook the lead once more through the highly-rated Perofeta on debut.

Melani Nanai was released into open space and despite coming up short of the line after backing himself to beat the last man, Perofeta was there in support for the score.

Perofeta converted his own score to give the Blues a 34-29 lead in the closing stages as the Blues ran down the clock, pleasing the local crowd, with the Reds unable to find the winning score.