The Brumbies consolidated their place at the top of the Australian Super Rugby conference with a 20-3 win over the Cheetahs in Canberra on Saturday.

The Brumbies outscored their visitors two tries to none but will rue missing the four-try bonus point in what was a one-sided affair.

The Brumbies led 13-3 at the interval but the gap really should have been a lot larger as the Cheetahs were forced to do a lot of defending.

The home side ruled at scrum time, enjoyed plenty of quick ball and were breaking the line regularly but were guilty of forcing the issue when a little more patience would have paid dividends.

The second half brought a greater return for the Brumbies' attacking endeavour but their execution was still somewhat wanting as the Cheetahs' porous defence deserved greater punishment.

The Brumbies struck early on as Christian Lealiifano ghosted through some sloppy defending by the Cheetahs for the first try as the hosts dominated the opening exchanges.

Matt Toomua was desperately unlucky to harshly be denied a try for a second movement after a referral to the TMO, but the home side was well and truly on top.

Joe Pietersen landed a penalty for the Cheetahs but Lealiifano replied in kind to leave the Brumbies 10-3 up at the end of the first quarter.

The scrums were a mess throughout but the Brumbies were able to squeeze out another penalty via their set piece just before the break, which Lealiifano duly slotted.

The pressure took it's toll after the restart as Brumbies lock Blake Enever barged over from short range for his first ever Super Rugby try following an attacking line-out.

Lealiifano added his second conversion to take the scores to 20-3.

From there the flood gates should have opened but the Brumbies conspired to fluff scoring opportunities on a number of occasions. 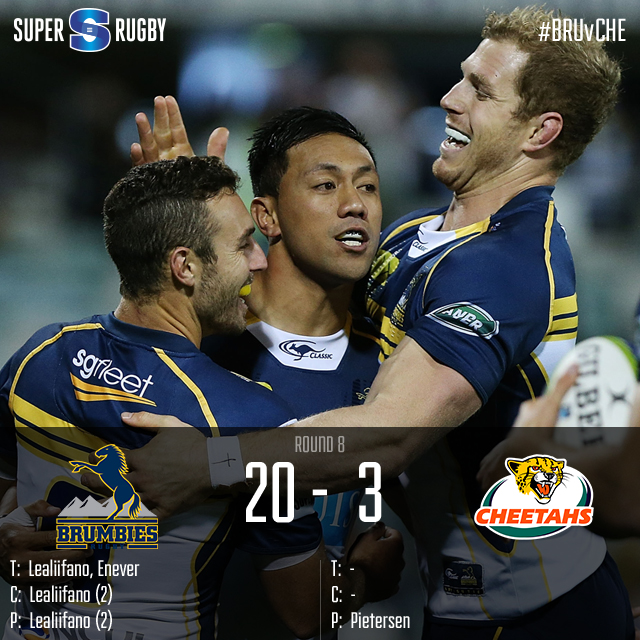