Having gone five matches without a win, the Bulls fought back to claim a 26-21 victory over the Cheetahs in Pretoria on Saturday.

The Cheetahs enjoyed the ascendency early-on and looked to play at the same intensity that helped them to victory over the Stormers last weekend, although there would have been a some disappointed when their hosts, who were struggling to win the territotial battle, opened the scoring through fly-half Handre Pollard.

The pivot knocked it over from 60 metres out but matters were all square just minutes later when Elgar Watts returned the favour from just inside his own half.

It took less than 10 minutes for Cheetahs kingpins like Heinrich Brussow and Willie le Roux to stamp their authority on a match where turnover possession would always create the best attacking platforms.

Initially both sides were satisfied to let their kickers do the work, but the Bulls would eventually start attacking from deep and this resulted in faster line speed by the Cheetahs defence.

A poor pass from Pollard to number eight Grant Hattingh was intercepted by Johann Sadie just outside the Bulls' 22 and once the centre put his head down, there was no catching him.

The 18th minute try gave the Cheetahs a lead that they would maintain for most of the match and it was deserved as they continued to show most of the initiative on attack.

Scrumhalf Sarel Pretorius played a key role in keeping his side on the front foot as he marshaled his troops well while also finding space behind a Bulls defensive line that proved to be very lethargic at times.

Pretorius helped his side gain a greater advantage when his lightning like reactions caught the Bulls offside.

Pollard was sin-binned for cynical play when he tackled the Cheetahs livewire shortly after he took a quick-tap penalty inside the Bulls' 22.

Watts knocked over the subsequent penalty to make it 13-3 and it would have been 16-3 had Le Roux converted a long range attempt his side won through their dominance at a scrum.

In a telling battle up front, the Cheetahs were far more impressive and this showed in the metres they were able to make against a side that lacked structure.

In a rare visit to the other side of the pitch, the Bulls eventually pulled back three points through full-back Jurgen Visser who knocked one over just before the half-hour mark.

Still down to 14 men, the Bulls were kept in the match through right wing Akona Ndungane, who put his body on the line to deny the visitors on defence.

On that occasion centre Ryno Bejnamin cut through the weak first line of defence, but was stopped inches from the line by the dreadlocked veteran.

That moment proved to be vital in the context of the match as the Bulls, with a full compliment of players, started building phases - and confidence.

From a set line-out move inside Cheetahs territory Hougaard finally found a weakness in an otherwise solid line and the Springbok would eventually watch prop Marcel van der Merwe score what would have been his team's first try after Ndungane put them on the front foot with a well timed run.

The try, however, was disallowed after the television match official ruled that skipper Victor Matfield had obstructed the visitors from tackling the carrier.

Pollard eventually added three more to the score, but the last say of the first 40 would belong to the men from Bloemfontein.

Just before the break the Cheetahs scored from set phase with Raymond Rhule finishing in the corner.

The visitors' back-line put the ball smoothly through the hands, with Sadie establishing the gap before off-loading beautifully to Benjamin who in turn sent a long pass to Rhule on the wing for the try. Watts missed the conversion but the Cheetahs held a deserved 18-9 lead at half-time.

In true Bulls fashion the home side had the first say after the break and were suddenly back in contention when lock Paul Willemse went over the whitewash.

Willemse, one of the Bulls' most impressive defenders on the night, barged over from close quarters after Pollard put through a neatly timed chip kick that scattered the Cheetahs defence.

This made it a two-point game and just as the Bulls started smelling success, Cheetahs replacement fly-half Johan Gossen opened the gap again with a penalty conversion of his own.

Then, perhaps the player who needed most to silence his critics, scored the try that gave the Bulls ensured the Bulls would enjoy the lead as the match headed into the last quarter.

Hooker Callie Visagie barged over from close range and in doing so, insured that his side's rather poor performance at scrum time would be over-looked for the time being.

With two points sepearating the sides Goosen missed a crucial kick at goal.

The Bulls' replacement pivot - Jacques-Louis Potgieter, would not make the same mistake and suddenly the Bulls were four clear of the side that beat the in the opening round of the tournament. 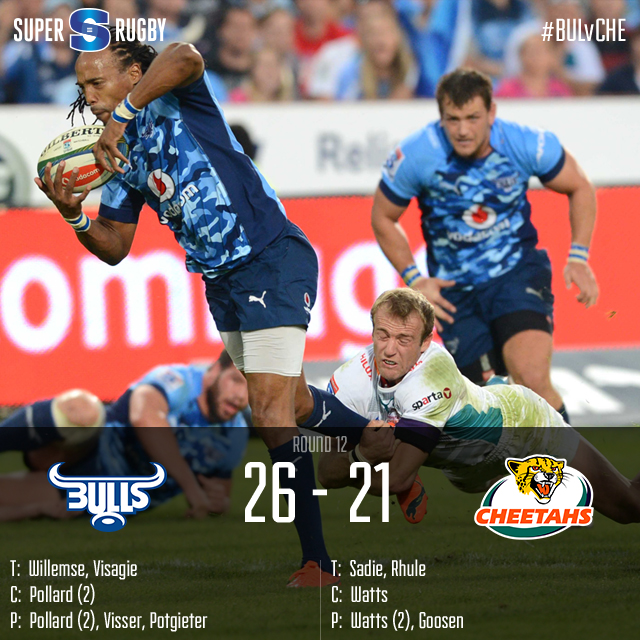