The Bulls edged past the Cheetahs with a 23-18 victory at Loftus Versfeld on Saturday, despite a valiant fightback from the visitors.

The home side scored 20 of their points in the first-half as they secured their first home victory of the season.

The Pretoria outfit move into second position on the Africa One conference table, four points adrift of leaders, the Stormers.

The visitors dominated both the lineout and the scrum set-piece, but it wasn't enough against the 2010 champions. And the Bulls' lead would have been greater had it not been for fly-half Tian Schoeman's inconsistency from the tee.

An early penalty from Niel Marais after the Bulls were penalised for not rolling away allowed the visitors to draw first blood. Schoeman responded five minutes later with a penalty of his own to bring the scores level.

HIGHLIGHTS: The Bulls edged past the Cheetahs with a 23-18 #SuperRugby victory at Loftus Versfeld on Saturday, despite a valiant fightback from the visitors.

Cheetahs number eight Paul Schoeman then received a yellow card for a professional foul and the Bulls utilised the extra man advantage as a beautiful final pass from Rudy Paige saw RG Snyman crash over for the first try of the match. Fly-half Schoeman missed the conversion attempt, the Bulls however took the lead with the score now on 8-3.

The Bulls continued to apply the pressure, opting rather for a five metre lineout as opposed to taking the three points on offer. This decision paid off as second-rower Jason Jenkins went over for their second try, Schoeman was successful with his attempt and the lead was extended to 15-3.

It wasn't until the 31st minute that the next points were added to the scoreline, Segeal Petersen stretched himself as he evaded Paige to go over in the corner. Referee Craig Joubert had to consult with the TMO Willie Vos to confirm the grounding of the try. Schoeman converted from against the touchline, reducing the Bulls' lead to just five points.

The Bulls responded almost immediately with Jamba Ulengo powering over from close range after the 26-year-old speedster outsmarted the defence and advanced upfield. Schoeman however missed the conversion and a ten-point lead was established as both sides made their way into the locker rooms at 20-10.

Marais added the first points in the second half after the Bulls were penalised at scrum time, reducing the Pretoria side's lead to 20-13.

It was once again a powerful scrum from the Cheetahs that saw them being rewarded with yet another penalty after the Bulls front row popped up, Clayton Blommetjies kicked for touch and an overpowering driving maul from the men from Bloemfontein allowed hooker Torsten van Jaarsveld to claim the try. Marais missed from the tee, the score read 20-18.

The Bulls then received a penalty after Henco Venter ran an obstructive line, Schoeman making no mistake from the tee to bring the score to 23-18.

Both Schoeman and Marais would miss penalty attempts in the 66th and 70th minute respectively.

Replacement fly-half Francois Brummer was then off-target with a controversial penalty at the end which would have denied the Cheetahs a losing bonus point, as the score remained at 23-18 in favour of the Bulls. 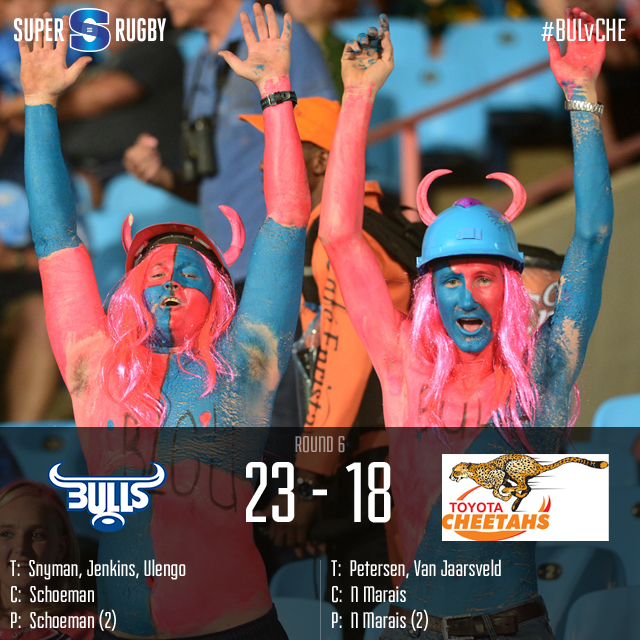