The Highlanders fought back from 0-14 down to see off the Force 32-20 in a fragmented Super Rugby clash at Forsyth Barr Stadium on Friday.

Despite trailing by that margin after ten minutes due to the Force coming out of the blocks firing with tries from full-back Dane Haylett-Petty and number eight Ben McCalman, the Highlanders managed to regroup and pick up their fifth win of the season that takes them provisionally top.

Their try scorers were Patrick Osborne, Dan Pryor, Matt Faddes and Jason Emery, which meant however they missed out on the bonus-point.

It will be a match remembered for several head collisions with the Force most hit in that department while for the Highlanders, Ben Smith was forced to withdraw from the contest in the 45th minute. The champions will hope his absence was more for precaution than genuine concern.

HIGHLIGHTS: The Highlanders fought back from 0-14 down to see off the Force 32-20 in an entertaining #SuperRugby clash at Dunedin's Forsyth Barr Stadium.

Concern was the word for the Highlanders early on in the game as a mistake from Osborne saw him force a pass to full-back Smith on his own try-line, which resulted in Haylett-Petty pouncing for the first score. With Peter Grant's conversion the Force enjoyed a seven-point advantage.

Seven became fourteen soon after thanks to McCalman celebrating his return to the side with a try, leaving the Highlanders fans in shock.

They needed to regroup and did manage to draw level before the break courtesy of Osborne collecting a looped pass from Aaron Smith on 16 minutes before Pryor finished off a lovely counter attack, which involved Osborne, Faddes and the aforementioned Smith. The tension eased.

We have an awesome game on the go in Dunedin. Stop whatever you are doing and tune in! #SuperRugby #HIGvFOR pic.twitter.com/OMgoq3eGSj

After the turnaround it was the Force who hit the front again though when their maul was brought down and Grant did the rest off the tee.

Hayden Parker, a late change for the injured Lima Sopoaga, levelled six minutes later but then came a series of stoppages in the fixture due to separate head knocks either side of Faddes finishing off a score that came after a nice grubber from Aaron Smith and Elliot Dixon's hack on.

The Highlanders were now leading 22-17 but the Force wouldn't go away in a fragmented half, with Grant making it 22-20 before Parker and then the visiting fly-half traded another three points apiece to set up a grandstand finish at 25-20. The Force had thirteen minutes to cause a shock.

But the home side would come through a tough game in style as Osborne slipped a tackle before sending over Emery for the match sealing score.

Unfortunately for the champions they were denied an Ash Dixon try in the game's last play because of a knock-on as they had to settle for four points, something they would probably take against a much-improved Force outfit. 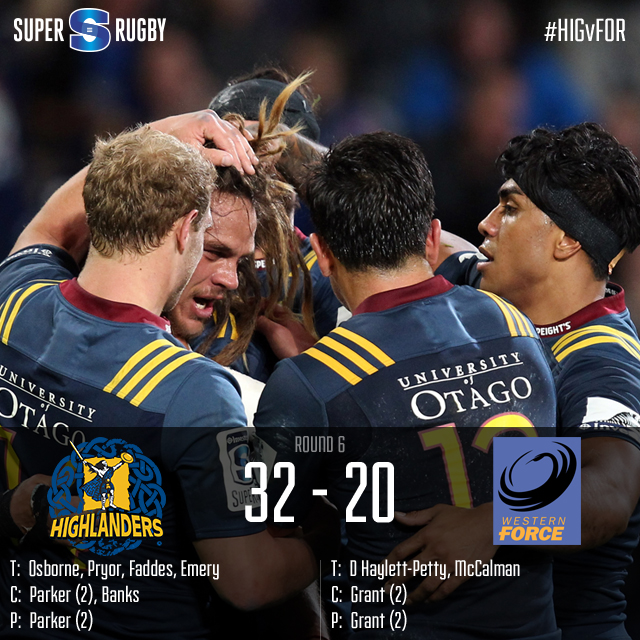