Cheetahs come back to pip Kings

The Cheetahs bowed out of Super Rugby with their heads held high after a 21-20 victory over the Kings at Nelson Mandela Bay Stadium in Port Elizabeth.

It was an even game between the discarded and forgotten men of South African rugby, with both sides axed from Super Rugby from next season and set to join the PRO12.

Both teams were clearly eager to make a statement in their last Super Rugby games and due to this played with a lot of passion and emotion.

The game made for entertaining viewing as both sides opted to run the ball but it was also helter-skelter stuff as a lot of passes didn’t go to hand and as a result there were turnovers aplenty.

The Cheetahs were rewarded for their early dominance of the territory with a Fred Zeilinga penalty having earlier turned down kickable goals and opting for touch. This time, captain Francois Venter pointed to the posts and Zeilinga made no mistake.

Mapimpi got the game’s first try in the 20th minute. From a Kings’ attacking five-metre scrum, Louis Schreuder decided to go blindside to the waiting Mapimpi who managed to power over the line despite the efforts of two Cheetahs defenders. Lionel Cronje converted to extend the lead to 7-3.

Five minutes before half-time, the Kings doubled their lead. From the five-metre attacking lineout, the Kings set up the driving maul which was brought down just short. From the ruck, Schreuder popped the ball inside to the onrushing Mjekevu, who broke through to dot down from close range after having run an excellent angle.

Soon after the resumption of the second half, the Kings scored their third try. Malcolm Jaer made the break in midfield and was eventually tackled. Cronje recycled the ball to Berton Klaasen whose nice pass set Mtyanda up through the gap with a free run to the try-line to dot down as the home side extended their lead to 17-3.

Zeilinga pulled a penalty back for the Free State side before Cronje responded with a penalty of his own. Finally, the Cheetahs got the try they were looking for. A tiring Kings defence were exposed out wide as Swart went over in the corner after the Cheetahs took the ball out left from an attacking scrum out on the right.

The Cheetahs then scored their second try in as many minutes. Francois Venter ran a superb line receiving from Clayton Blommetjies before his inside pass found Raymond Rhule who ran through to dot down. Niel Marais converted.

Marais then gave the Cheetahs a one-point lead with a penalty from right in front after the Kings were penalised for going offside. And that’s how it remained as the Cheetahs completed a remarkable turnaround. 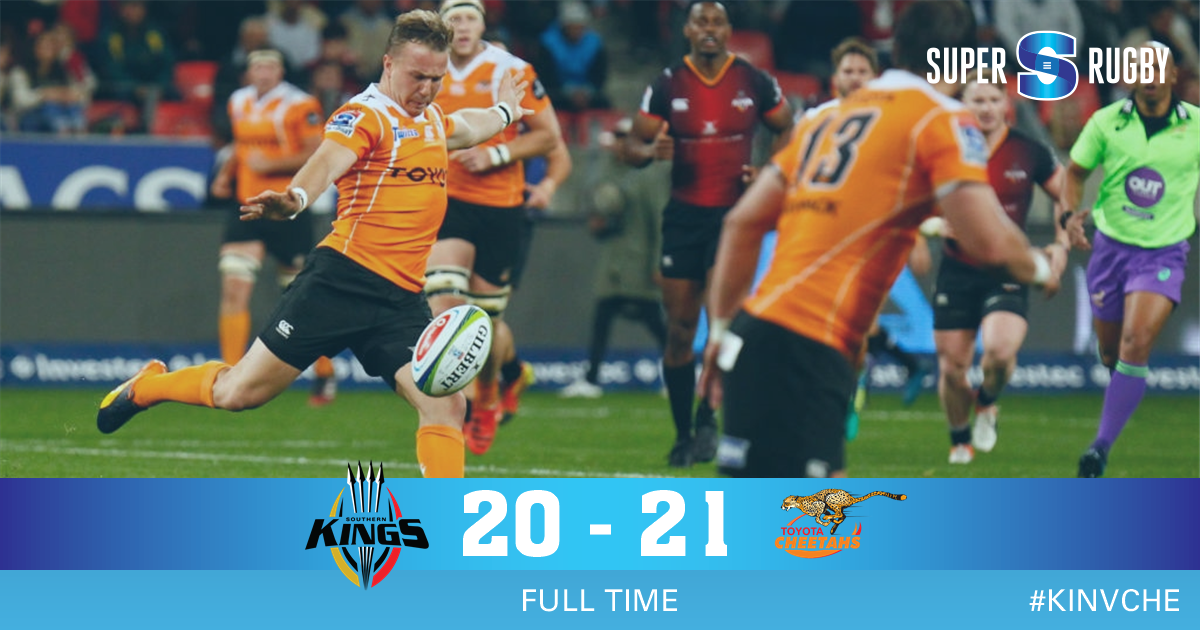