The Cheetahs claimed a rare overseas win on Saturday as they beat the Force 24-15 in difficult conditions in Perth.

In a match that marked the 10th anniversary of these two teams' entry into the competition, the Cheetahs crashed the Force's party, overturning a half-time deficit to claim their third win of the year before heading back to the Republic.

The teams scored a try apiece in an error-strewn first half but the Force led 10-8 at the interval.

The second half was a similarly tightly-fought affair as both sides scored tries from rolling mauls to set up a close finish.

In the end, Cheetahs flyhalf Joe Pietersen's boot - the source of a second-half drop-goal - proved the difference as he finished with a personal haul of 14 points.

The Cheetahs were first to strike as winger Raymond Rhule went over in the corner after a patient build up from the visitors.

The Force were rewarded for backing themselves when three easy points were on points offer as they replied with a great try. Off the back of a solid scrum, Dane Haylett-Petty produced a great offload to Luke Morahan, who clinically took the gap left Rhule leaving his man.

An excellent conversion from Luke Burton gave the hosts the lead for the first time approaching the end of the opening quarter.

Pietersen hit the target with a long-range penalty to put his side back in front just before the break as the heavens opened and heavy rain came started to come down.

But Burton replied in kind to ensure that the hosts went into the half-time break with a narrow lead.

The Force made a perfect start to the second half as a textbook rolling maul produced their second try with replacement flank Chris Alcock the man touching down. The conversion was missed though.

The Cheetahs were playing pragmatic rugby, keeping hold of the ball and Pietersen kicked over a penalty followed by a neat drop-goal to narrow the gap to a single point with half and hour left to play.

The visitors landed the killer blow inside the final quarter as Heinrich Brussow crashed over at the back of a rolling maul.

Pietersen added the extras to give his team a six-point advantage at 21-15.

A mammoth defensive effort from the Cheetahs kept the Force at bay through countless phases before a counter attack gave Pietersen the chance to add another penalty and put the game beyond reach. 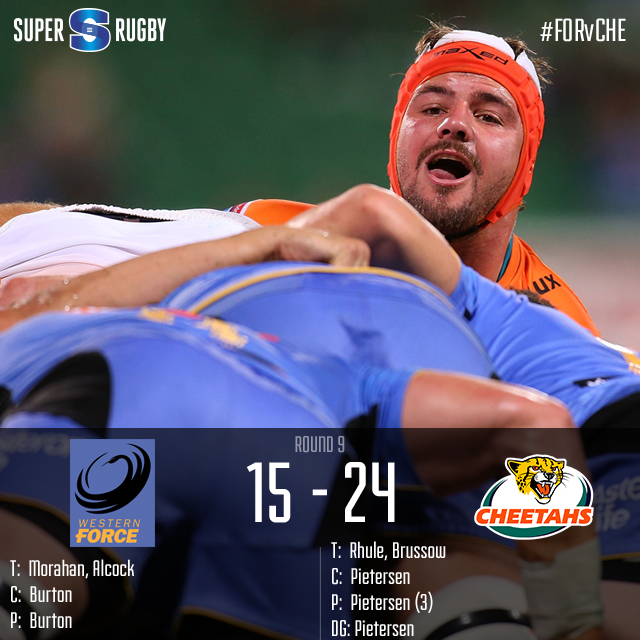