Cheetahs fight back to edge Sunwolves

The Cheetahs recovered from a half-time deficit to run out 32-31 winners against Sunwolves in Singapore on Saturday.

The Sunwolves will be kicking themselves as they wasted a golden opportunity to win their first ever match in the competition, after holding a 31-13 lead early on in the second half.

Both sides gave the ball plenty of air throughout although, as the scoreline suggests, the game will never be used in defensive coaching manuals.

The two sides crossed for four tries apiece with Akihito Yamada leading the way for the Sunwolves with a first half hat-trick.

The Sunwolves started brightly and were playing with real rhythm and confidence, while their opponents seemed rattled, during the opening period.

Yamada scored his first try as early as the third minute, after finding himself in space down the right hand touchline. He still had work to do but beat two defenders with ease before diving over.

Tusi Pisi added the extras, before Niel Marais slotted two penalties to reduced the deficit to a point.

Yamada soon crossed for his second five-pointer, however, after brilliant work from his team-mates in the build-up. Pisi launched a crossfield kick which Riaan Viljoen gathered before passing to Harumichi Tatekawa, who did well to offload to Yamada who got over in the right-hand corner for his second try.

The Cheetahs struck back in the 25th minute when, after Sergeal Petersen booted the ball ahead close to the Sunwolves' 22, Marais dived on it behind the Sunwolves' tryline for his team's first try.

He dusted himself off and added the extras but 10 minutes later, Pisi and Yu Tamura combined brilliantly to send Yamada in for his third five-pointer, and on the stroke of half-time Sunwolves skipper Shota Horie barged over from close quarters for their fourth try.

Pisi converted, which gave his side a 28-13 at the break, and three minutes after the restart the pivot slotted a penalty which meant the home side were cruising.

But the Cheetahs had other ideas and five two minutes later Uzair Cassiem burst through a gaping hole in the Sunwolves defence to score under the posts.

That score seemed to rejuvenate the men from Bloemfontein and they continued to dominate as the half progressed. The Sunwolves, meanwhile, looked a totally different side from the first half and they soon conceded another try - Marais dotting down after poor defending from the hosts.

With the score now at 21-27 to the Sunwolves, the Cheetahs continued to attack and were soon camped close to their opponents' tryline. The Sunwolves suffered a blow when Ed Quirk was sin-binned for persistent infringements on defence.

The Cheetahs opted to kick for touch from the resulting penalty and, from the ensuing line-out, Boom Prinsloo scored what proved to be the matchwinning try off the back of a rolling maul deep inside the Sunwolves' 22. 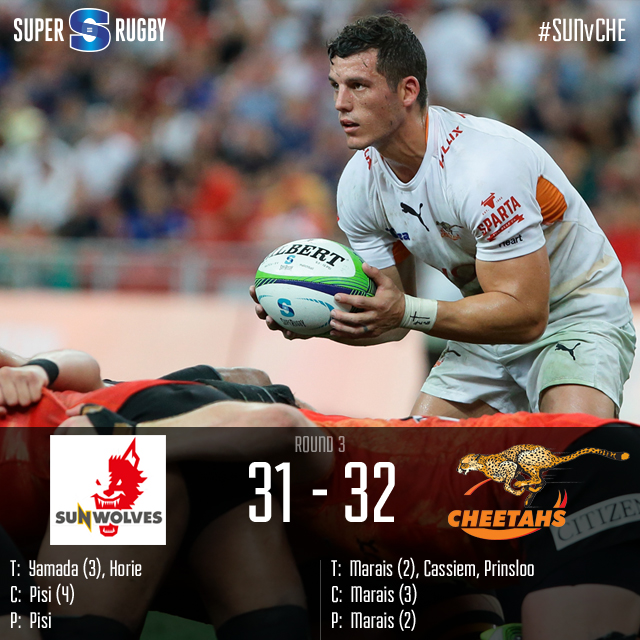