The Cheetahs overcame a spirited Sunwolves side to triumph 38-31 in Bloemfontein on Saturday in Super Rugby.

It was not the blowout many pundits expected after the Sunwolves made the Cheetahs sweat for most of the game.

The Japanese side scored in the first minute of the game to put the Cheetahs on the backfoot, and he visitors dominated the kick-offs and produced a far better defence than in previous games.

The Cheetahs ultimately scored four tries through Torsten van Jaarsveld, Teboho Mohoje, Clinton Swart and Rayno Benjamin. while the Sunwolves try column on the scoresheet was filled by Shota Emi, Hayden Cripps and two from Kenki Fukuoka in the 55th and 62nd minutes.

The Sunwolves got out of the blocks first when they blitzed the bewildered Cheetahs in the first minute to score, as full-back Emi went over for the first try with Hayden Cripps converting.

The Cheetahs then hit back with their first try of the match after a lineout drive in the Sunwolves 22-metre area, where the Cheetahs,took the ball to ground before captain Van Jaarsveld picked up and went around the fringes to charge over the line unopposed.

The home side then took the lead when they were awarded a penalty in the Sunwolves ten-metre line and Fred Zeilinga kicked over a penalty, to make the score 10-7. The Sunwolves retook the lead within minutes as they started an exciting movement up the midfield. They sent the ball wide with Cripps finishing off the move under the posts after some electric side stepping.

The Cheetahs looked as though they had recovered the lead after Swart stretched out to score after a strong run but the TMO deemed that the ball was not grounded as the ball was knocked forward. The Cheetahs wouldn’t leave the half without points though as Zeilinga slotted a penalty making the score 14-13 to the visitors.

Teboho Mohoje then sprinted over the whitewash after Tian Meyer ran straight up to the line and gave the quick loose-forward a short pass straight through the gap, with the number 10 adding the extras. Cripps then closed the gap on the half-time siren with a penalty making the score 20-17.

The Cheetahs then extended their lead in the 42nd minute after Zeilinga nailed a penalty and ten minutes later scored a try through inside centre Clinton Swart after a well-worked team score after the big number 12 broke through the Sunwolves defence to score.

The Sunwolves replied quickly though as winger Kenki Fukuoka scored after he was given a short pass from Willie Britz in a two-on-one after breaking the line.

Replacement Jamie-Jerry Taulagi scored the conversion making the tally 30-24, before the winger scored again to take the lead after he showed some quick feet to get around the Cheetahs defence.

As the Sunwolves were cementing their hold on the momentum of the game they copped a yellow card when replacement prop Takuma Asahara was caught infringing on the breakdown. The Cheetahs used their one-man advantage well as they ran the visitors ragged before sending it wide to Benjamin who scored in the corner.

Zeilinga extended their lead after kicking over his fourth successful penalty of the day, taking the scoreline to 38-31. 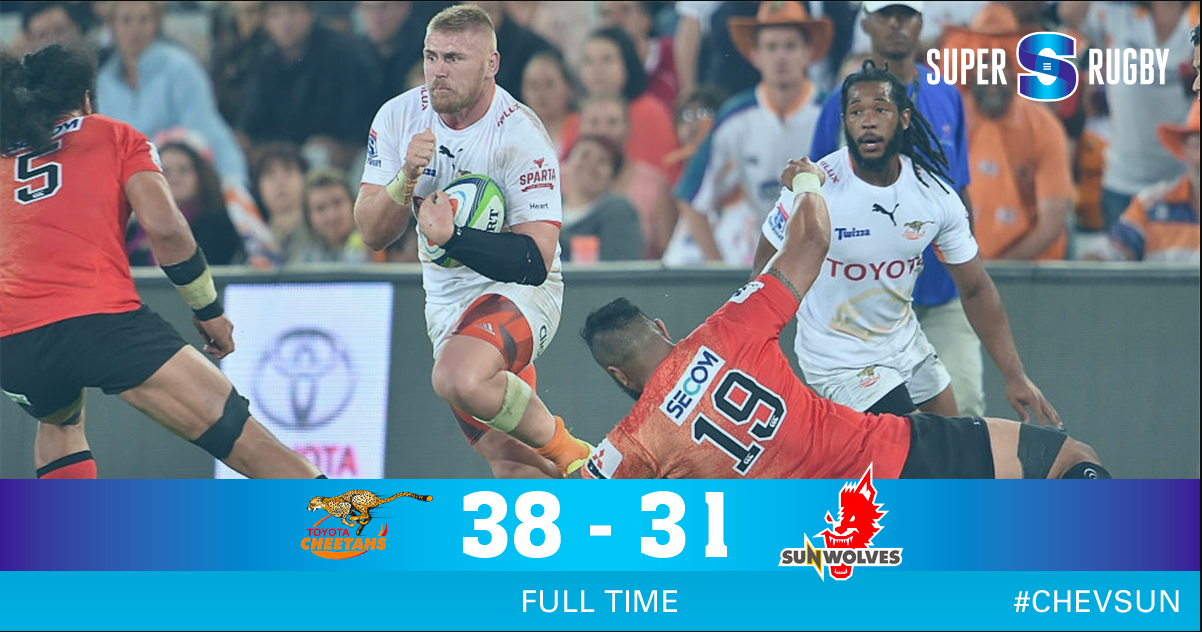